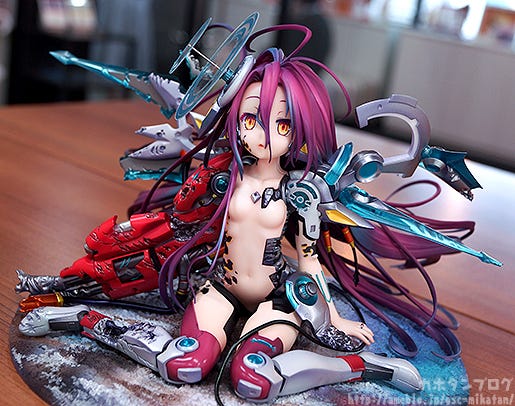 The star of today’s blog is… ! And today we’ll be taking a look at the From the anime movie “No Game No Life -Zero-” comes a 1/8th scale figure of the ex-machina girl, Schwi! The figure is based on the illustration from the film that featured Schwi with a part of her body destroyed, gazing out into the distance with a wistful look in her eyes.

The battered appearance of the huge weapon on her right arm and all the other mechanical details of her design have been intricately sculpted, with careful paintwork to recreate the original as faithfully as possible.

In contrast to the mechanical parts, her skin looks pale and soft with some burnt areas caused by the damage to her body – the figure melds the organic and mechanical parts of her design together with beautiful detail. Be sure to add her to your collection and enjoy the frank expression of the ex-machina that wanted to know what it meant to have a human heart.

I wished, to live together…

Highly skilled in combat and heavily armed, we proudly present this scale figure of the ex-machina girl Schwi. Modeled after the memorable “No Game No Life -Zero” key visual, even portions not visible in the illustration have been crafted with scrupulous detail! Including a certain ring on her left hand! The unique color transitions in her hair have of course been carefully detailed, and a clear material has been used for the wings to give them a slight glimmer – with the same color blue you can find in her hair! ( ´>ω<`)

Her human-like flesh has a sexy pinkish hue, while the mechanical portions look painfully brutal… ! A clear material has been painted with different colors on either side, to intentionally create a more subtle shimmering effect.

To properly express each and every burn wound and gauging cut, you can see a remnant of the heat generated when the blow was dealt… ! ▲Especially on the right side – you can almost hear that sizzling crackle… !

▲I think you get a better sense of that movement seeing her from all 360 degrees… !

Be sure to get a good look at her expression, too!  (｡･ω･)ﾉﾞ At a glance, it seems as if she’s gazing skyward with abandon, but from the front it looks as if she’s staring at something straight ahead in determination… !

Even now I feel like she could mutter something in that cute voice from her haplessly parted lips… I’m hesitant to say I like it but… it has this mysterious innocence about it, together with steadfast resolve… but regardless, I can’t look away… (/ω＼)

If you add her to your collection, please take the time to carefully appreciate all of the details!

The base incorporates the colors seen in the illustration background, so it too is captured in the figure! ▲It was announced at the 2017 Summer Wonder Festival!

And in case you were wondering, here’s what she looks like from above. (っ’ω’)っ)) ▲The color transition is simply sublime… ! Her thigh, damaged calf, and rugged terrain… The contrast of all the different textures is a thing of beauty ε=(｡・д・｡)

While the figure definitely invokes the emotion of the movie, it’s also a testament to beautiful craftsmanship and artisan paintwork – we certainly hope you’ll add it to your collection!

Available for preorder from 17th April!

For product details, please be sure to visit the Good Smile Company Official Site that day around noon!