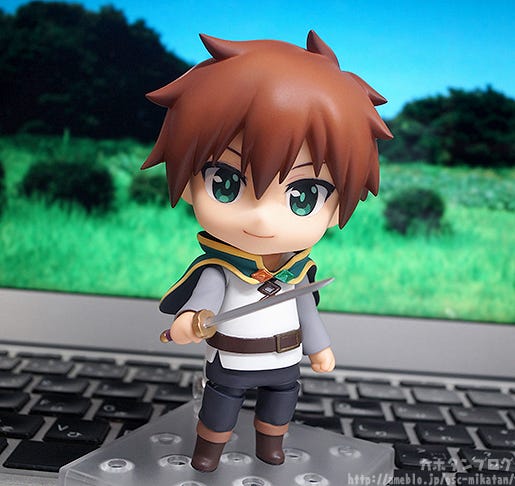 Today I’m going to be taking a look at the highly requested…
Nendoroid Kazuma! From the anime series “KONO SUBARASHII SEKAI NI SYUKUFUKU WO! 2” comes a long-awaited Nendoroid of the adventurer, Kazuma! He comes with three different face plates including a standard expression, a shouting expression with eyes that show he is going through a rather rough time as well as a more devious expression for when he makes use of dirty tricks.

His green cape can be removed for a slightly different appearance, and other optional parts include his Chunchunmaru sword, magic effect parts to display him casting create water as well as the panties that he stole using the steal spell! He also comes with special hand parts to capture his more iconic poses allowing fans to recreate various poses from the series! Be sure to display him with the previously released characters from the series! ♪

From the popular anime series “KONO SUBARASHII SEKAI NI SYUKUFUKU WO! 2” comes the long-awaited Nendoroid of the main character from the series – Kazuma!! Here he stands with his sword, Chunchunmaru as well as his lovely short cape! ★

There haven’t been any announcements before this, so I’m sure he will come as quite a surprise to everyone!

(I did make a little sneak peek over the weekend! ♪) He also comes with some magical effect parts to cast “Create Water”!

First up is the face plate above – a standard expression that can be used for all sorts of poses! His second expression is the shouting expression based on the scene where he was running away from a giant toad in a rather panicked state! It can also be used as a more of a shocked expression! ▲ Displayed with Nendoroid Darkness and her tranced expression! ε-(o´ω｀o)

Moving onto his third expression…! He even comes with the panties that he stole from Nendoroid Megumin using the “Steal” spell! ★ ▲ It’s hard to think of him as a main character when there are scenes like this!

While he looks great alone, the Nendoroid obviously really shines when displayed with the other characters in the series! Be sure to pose him with the other KonoSuba characters and recreate both your favorite scenes from the series as well as all-original situations in Nendoroid size! ((´д`●))三((●´д`))

Last but not least, here is the collection altogether! … Nendoroid Yunyun was unfortunately not available for the photograph!! (/ω＼) She was off in development, as shes is due to be released in May 2018!

Be sure to add the charming main character to your collection!

In addition, orders from the GOODSMILE ONLINE SHOP will also comes with a Folded Jersey as a bonus! ★ ▼Here is a close-up of just the jersey! ♪ Be sure to consider it when preordering! (｡･ω･)ﾉﾞ