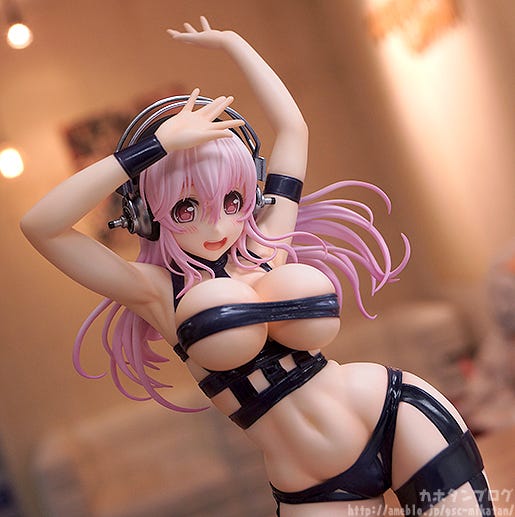 The first HOT LIMIT Anniversary Collaboration Figures to celebrate the 20th anniversary of T.M.Revolution’s debut is Super Sonico, who has just celebrated her 10th anniversary! The figure is based on an illustration by Tsuji Santa (Nitroplus) that was included in Takanori Nishikawa’s book distributed at Comic Market.

The figure has been sculpted in a dynamic pose as if in a scene from one of T.M.Revolution’s promotional videos, and the contrast between the texture of the outfit and her soft-looking skin has been captured with intricate detail! Be sure to add the sexy Super Sonico to your collection!

T.M.Revolution x Super Sonico: The first in a series of HOT LIMIT figures!

A new set of figures to celebrate 20 years since T.M.Revolution’s debut!! The first of which is Super Sonico wearing the famous outfit worn by T.M.Revolution in their “HOT LIMIT” song!! Just like the song’s lyrics say, she is showing off whatever she can!!! Just take a look from a couple of different angles! The contrast between her innocent smile and the sexy outfit is lovely!!

If you’ve never heard the “HOT LIMIT” song before, I suggest you listen along while reading this review to get in the mood! (っ’ω’)っ

The outfit is based on the outfit that T.M.Revolution’s Takanori Nishikawa wore in the music video above, but it has been slightly tuned to make for a more sexy look on Sonico’s body! This is how she looks from the back! ヽ(*´Д｀*)ﾉ ▲ Her feet and back were never visible in the original illustration!

If you take a look from the side you can get the best feel for the impressive size of her bust that refuses to give in to gravity as well as the way the outfit squeezes down on her soft skin! ((´д`●))三((●´д`)) ▲ You can just picture the body on the other side of the outfit!

The outfit has also been sculpted with careful attention to the creases and stretched areas which gives a good feel as to how tight the outfit is! She looks amazing from all sorts of different angles! (/ω・＼)

In addition, she also comes with a little helicopter, also based on the music video that I linked above! ★ If you look close you can see Pochaco is looking out!!

This is all of course included to faithfully capture the original illustration by Tsuji Santa (Nitroplus)! A post card of this illustration is also included with the product as a bonus! A lot of the photos on today’s blog don’t include the helicopter, but it is included to display with or without Sonico!

On first glance I think most people tend to look straight at Sonico’s boobies, but I personally want to bring more attention to the area around her bottom! Look at those delicious hips and thighs!!＜●＞＜●＞ ▲ Just looking at it makes you want to touch her!! ▼ Another thing I want to touch on is the contrast between the glossy paintwork of the black outfit and the warm soft looking paintwork of her skin!! It captures the textures so effectively making for such a treat to the eyes! ♥

Add the first of the HOT LIMIT figures to your collection!
Super Sonico: HOT LIMIT Ver.! She is currently up for preorder!! ♥

Orders from the GOODSMILE ONLINE SHOP are open until the 9th November 2017 (Thu) at 12:00JST, so make sure you don’t miss out!

Plus, the second and third in the series are well under way!
1/7th Scale Uzuki Shimamura: HOT LIMIT Ver.