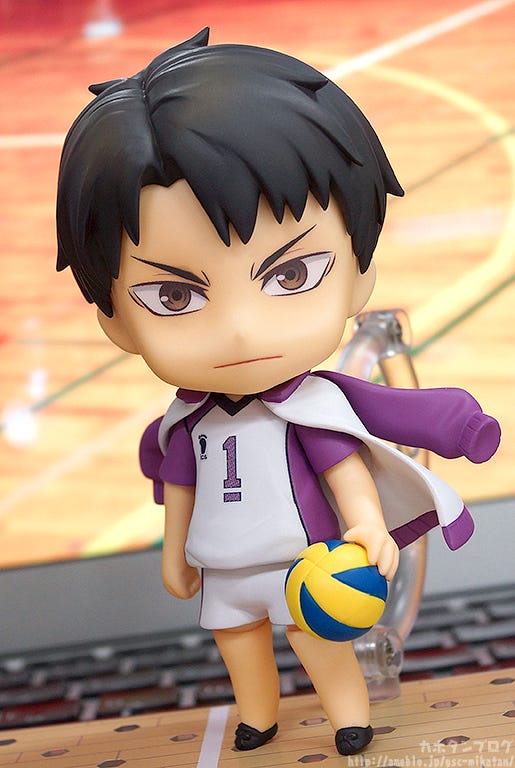 We’re now into July and the heat is already starting to become unbearable! I hope everyone is taking care during these hotter months!

Anyway, today I’m going to be taking a look at…
Nendoroid Wakatoshi Ushijima! From the popular volleyball manga and anime series, ‘Haikyu!!’, comes a Nendoroid of the Shiratorizawa High School Volleyball Club’s captain known as the undisputed champion – Wakatoshi Ushijima! He comes with three face plates including a standard confident expression, an expression showing his confidence during a match as well as a smiling expression with closed eyes.

The Nendoroid allows you to recreate a number of memorable scenes from the series and also comes with a volleyball as well as a special base made in the image of a volleyball court. He also comes with effect parts to display him hitting the volleyball with great force for action poses, as well as a water bottle for some more relaxed poses. Be sure to display him with the previously released characters in the series and enjoy all sorts of different situations in Nendoroid size!

“It doesn’t matter who they are. We will take them on.”

The “undisputed champion” and ace of Shiratorizawa High School’s Volleyball Club, Wakatoshi Ushijima is joining the Nendoroid series! Even in Nendoroid form that sincere and stoic personality comes through so nicely! His standard pose above also has him clinging to the volleyball with one hand in a pose very befitting to his character!

As with all the previous team captains, he comes complete with his team jersey to display on his shoulders! ★ The sleeves even have ball joints in them allowing for slightly different nuances as they blow about in the wind! (∩・∀・)∩

Although it is a little hard to see in the photos, another thing to note is that his hair has an ever so slight brown-green gradient effect! He comes with a large selection of interchangeable arm parts  as well as a three-joint stand which can be used to recreate his jumps and moves on the volleyball court! You can pose him going through the complete motion of spiking the volleyball!

As you can see from the photo above he even comes with effect parts to show how much force he is spiking the ball with!! ☆ ▲ You can see why they say he has the force of a cannon!

Plus, along with the standard face plate above… He also comes with this relaxed looking smiling face as well as a water bottle for some break scenes, as well as… A face plate showing off his confidence based on a certain scene from the series! I took this photo with less light than normal to bring out that dark look to better suit the scene!!

Here is is displayed with Nendoroid Hinata! (｡･ω･)ﾉﾞ Hinata is a final product while Wakatoshi is still a prototype which makes him a little bigger, but the final products will correctly show their differences in height!

Be sure to add the cute little undisputed champion to your collection!
Nendoroid Wakatoshi Ushijima!

In addition, purchases from the GOODSMILE ONLINE SHOP will include a Nendoroid Plus Rubber Strap: Wakatoshi Ushijima Undisputed Champion Ver. as a bonus! Also don’t forget that figma Hinata is also currently up for preorder! ☆ Plus Nendoroid Lev Haiba and Nendoroid Morisuke Yaku are currently in the works!