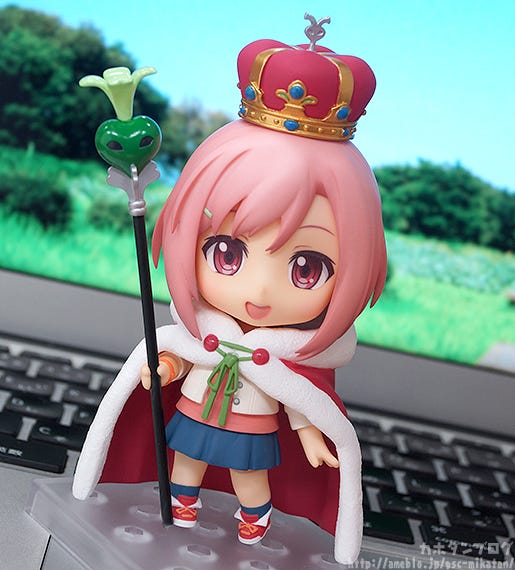 I always get excited when someone gives me onsen manjuu as a souvenir! It’s one of this things that is really delicious, but you can’t just buy on a daily basis, making it one of the best gifts! From the anime series “Sakura Quest” comes a Nendoroid of the girl who serves as the “King” of the Chupakabura Kingdom – Yoshino Koharu! She comes with three face plates including a cheerful smile, a surprised expression as well as a cute chewing expression for when she fills her mouth with manjuu steamed buns.

Optional parts include a cape, crown and scepter, as well as the “sword in the stone” which can also be removed from the stone and held by Yoshino. One of the famous Chupakabura manjuu steamed buns is also included for her to enjoy – a huge selection of parts to bring out Yoshino’s personality and recreate your favorite scenes from the series! Be sure to add her to your collection!

From the third in P.A WORKS’ “Working” series, Sakura Quest comes a Nendoroid of the “King” of the Chupakabura Kingdom – Nendoroid Yoshino Koharu!

Her lovely crown and the cape with a lovely white fluffy collar have both been included, and she also comes with her scepter to complete her regal appearance as the king! ▲ Even in Nendoroid size the crown looks very detailed and fancy! ♪

Along with her standard cheerful smiling face, she also comes with a surprised expression as well as a holy sword in a stone! ▲ This expression can be used for all sorts of things!

As you can see from the above photo, the crown and cape can also be removed for a more casual looking Yoshino! (´□｀｡)

The sword can also be removed and equipped by the Nendoroid! ▲ Even holding a sword, the smile makes her look so cute and innocent! The cheeks puffed up with food are so cute! The right side is actually sculpted sticking out a bit to show just how much manjuu she has eaten! She also comes with a Chupakabura manjuu steamed bun to hold as well!! ♥ The image on the front may look like an unidentified creature, but as we all know it is super delicious! ((´д`●))三((●´д`))

If you don’t think of her as eating, the chewing expression can also be used as a content smile… or even a bit of a scheming face depending on how you display her! Recreate your favorite scenes from the series as well as all sorts of original situations in cute Nendoroid size!

Add the adorable King of the Chupakabura Kingdom to your collection! She’ll be up for preorder from the 6th July!

In addition if you preorder from the GOODSMILE ONLINE SHOP she will also come with a “It’s My Fault” Cage Plate! A special attachment parts are also included to place the stand in front of her to recreate the scene from the series! ▲ I imagine it could be fun to use with other characters too! (人´∀｀*)