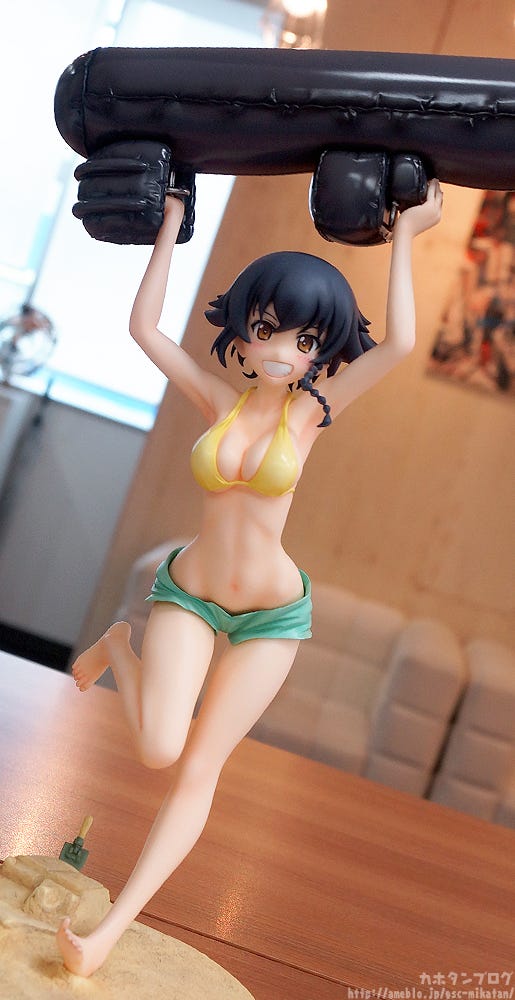 Today I’m going to be taking a look at a figure already up for preorder! Phat! Company’s…
Pepperoni! From ‘GIRLS und PANZER der Film’ comes a 1/7th scale figure of Anzio Girls High School’s vice-commander Pepperoni, dressed in her swimsuit! Her impressive body, dynamic pose and huge smile have all been captured in lovely detail as she holds a giant inflatable toy above her head. The base has also been specially detailed and even features a little CV33 tank build from sand!

In addition, the figure comes with a paper-craft pizza box featuring the Anzio school emblem! The figure can be posed holding the box instead of the inflatable toy above her head for a slightly different pose! Simply select the option you prefer!

A 1/7th scale figure of the cheerful Pepperoni, looking ready to make the most of the summer at the beach!

The figure is based on a pin-up poster that was seen in the August 2015 (Vol.37) edition of MC Axis Magazine! The charm of the illustration has been captured so nicely in figure form, with her rather revealing outfit really showing off her impressive body! ♪ The huge and yet somewhat mischievous smile on her face captures her playful personality so nicely! ヽ(*´Д｀*)ﾉ Would be the incredible curves…. … of her rather sexy looking body! Personally I really love the curve of her hips and bottom! The illustration only ever allows you to look at her from a single angle, but with the figure you can look and enjoy from any angle you please! ( ･ㅂ･)و ̑̑ ｸﾞｯ

The next thing I want to point out is the huge floating toy!!

The sculpt and paintwork bring out that vinyl appearance of a floating toy so effectively! It’s hard to believe that this is made from hard plastic!

The seams as well as the shiny appearance are all so perfect! (I tried touching it, but it was indeed hard just like the rest of the figure!)

At her feet you’ll see a little CV33 tank made from sand! ▲Even the spade left in the sand is beautifully detailed!

She also comes with a bonus interchangeable part – a paper pizza box that can be folded and then held like this! ▲ The floating toy  can be removed and replaced by the pizza box!

The tasty looking logo of Anzio Girl’s High School is on the box! Simply select the part you think suit her better! ♪

Be sure to add Anzio Girl’s High School’s sexy vice-commander to your collection! The 1/7th Scale Figure…