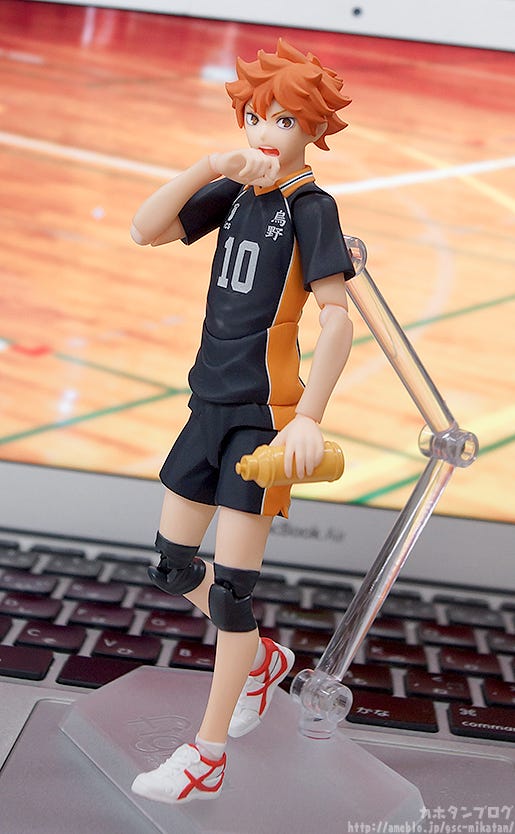 I was just watching a special recipe for tamago kake gohan and it made me rather hungry. I never knew there were so many different types to choose from, and even specialist restaurants!

Anyway, today I’m going to be taking a look at a figure celebrating his birthday on the 21st June…
figma Shoyo Hinata! · The smooth yet posable figma joints allow you to act out a variety of different scenes.
· A flexible plastic is used for important areas, allowing proportions to be kept without compromising posability.
· He comes with three face plates including a calm and composed expression, a serious expression to pose him during a match as well as a lively smiling expression.
· Accessories include a volleyball, net parts and a drink bottle to recreate various scenes from the court.
· An articulated figma stand is included, which allows various poses to be taken.

A figma of the “Ultimate Decoy” from Karasuno High School’s volleyball team!

The long awaited first Haikyu! figma is none other than Shoyo Hinata, Karasuno High School’s “Ultimate Decoy”! His iconic spiky hairstyle as well as the Karasuno High team uniform and even his shoes and other accessories have all been sculpted in lovely detail! ▲ He looks just as great from the back! ♪

The figma comes with a nice selection of interchangeable hand parts allowing for various poses, and he also comes with three different face plates to choose from! ε=(｡・д・｡) Such a calm, composed yet valiant expression!

You can really see his devotion to volleyball through those eyes! The perfect expression to capture Hinata going for a spike!

The sharp eyes and shouting mouth really bring out the tension of the shot! Another thing that really shines about this particular pose is when you look at his shoes from the back!! ヽ(ﾟ◇ﾟ )ﾉ The sole design has been faithfully included!

This level of detail on an action figure is what makes the figma series so impressive!! There is also a joint included at the very tip of his toes for slightly different nuances while posing! Such an innocent and cheerful smile! (*´Д｀*)ﾉ

His love for the sport comes out in his smile so beautifully… plus he also comes with parts that bring out the feel of the volleyball court even more! An extra long figma stand is even included allowing you to display Hinata showing off his incredible jump! It’s a scene right out of the series! (´□｀｡)

The net is made with a clear sheet of plastic with lines printed on it! Simply just placing it beside the figma brings out the atmosphere so much more! ▲ Obviously the volleyball itself is also included with the figure! ♪ Wiping his mouth after a drink of water!!

The bottle also comes with a special hand that allows him to hold it with ease!

A total of three face plates, various accessories and interchangeable hand parts! So many display options for Hinata once he joins your collection! ♥

Here is is compared with his Nendoroid! (*´∀｀)ノ If anyone owns a Nendoroid but has never had a figma, this should give you a good feel for the size of a figma figure! (∩・∀・)∩ ▲ Chibi and not chibi! They each have their own good points! ♪

For those who are unfamiliar with the figma series, you can find out more about them on the official figma site! Simply put, they are a collection of PVC action figures that incorporate both “Beauty” and “Articulation”! In other words they not only look great, but can also be posed in all sorts of different ways!

You can even pose them in original poses such as this sitting pose! Be sure to move him around in all sorts of ways once he joins your collection! Add the “Ultimate Decoy” that never gives up to your collection!

He’ll be up for preorder tomorrow!

In addition, purchases from the GOODSMILE ONLINE SHOP will include a Tempted Face Plate as a bonus! ( ✧Д✧) Also don’t forget that Nendoroid Daichi Sawamura is currently up for preorder!★ Plus we also have two more Nendoroids announced and on the way!