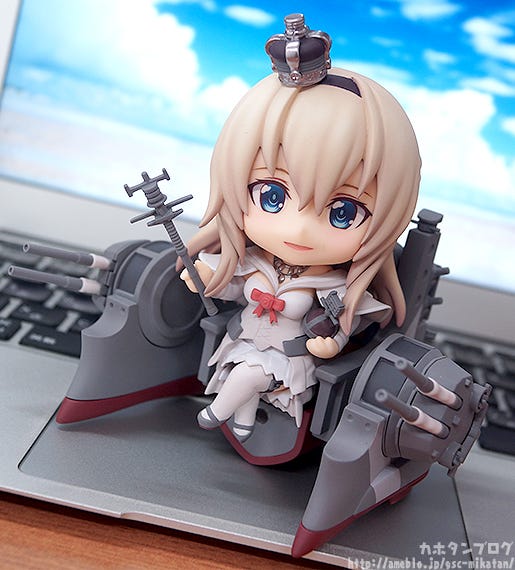 If I had to choose between tea or coffee, I would be on the tea side. Recently I’ve really been enjoying “KUSMI TEA” – they have so many different varieties!

Anyway, today I’m going to be taking a look at…
Nendoroid Warspite! From the popular browser game ‘Kantai Collection -KanColle-‘ comes the first Nendoroid of a British ship – the second Queen Elizabeth-class battleship, Warspite! She can be posed sitting on her ship parts like a throne as in the illustration from the game, but also comes with interchangeable parts which allow you to pose her standing!

She also comes with effect parts to display her turrets firing, as well as a more stern face plate that can all be used to easily pose Warspite in battle scenes! As a British ship she also of course comes with a cup of tea, and the chalkboard from the classroom set is also included as a cardboard sheet to display beside her. Enjoy all sorts of situations in Nendoroid size!

An adorable Nendoroid of the second Queen Elizabeth-class battleship, Warspite! She is also the first British ship to join the Nendoroids! ★

I must say that every time I look at the KanColle Nendoroid line-up I’m always amazed at how many characters have been released! Yet they are all so different and special in their own ways! (´□｀｡) ⇒ You can see the full listing here.

But let’s get back to Warspite! ♪

The iconic ribbon on her chest with a bit of a rosy look, the folded legs that give a slight peek at her bare skin and so much more details have all been shrunk into a 10cm tall figure! ♡ ▲ Her impressive bosom is also very noticeable even in Nendoroid size!

As with some of the previous KanColle Nendoroids, her ship parts come with Nendoroid joints in the left and right sides and the turrets are rotatable, allowing for the parts to be moved around in all sorts of different ways! ε=(。・д・。)

▲ The left and right turrets can rotate around too!

As you can see, her ship parts are designed like a little throne for her to sit on… However, if you transform the back piece so that the turret points outward… The Nendoroid can be transformed into a standing mode more suited for combat scenes! ((´д`●))三((●´д`)) In other words the Nendoroid can switch between two completely different ship part types allowing for even more posing opportunities! Plus the whole transformation also does not require you to add or remove any parts! She also comes with a paper blackboard from the classroom set, together with a stand to display it beside her!

This would also look great with certain other KanColle Nendoroids as well! You can always switch parts around between them! (●‘∀‘●)ﾉ” As you can see from the previous photos, she can easily be displayed without the ship parts entirely, and you can also just take the seat part of her throne and display her with that only! ♪ As a British ship she also of course comes with a cup of tea, which matches the sitting pose very nicely and captures a more everyday kind of pose! ♡

You could pose her with the cafe counter kit from HACOROOM and create a lovely tea time scene! ★ ▲ One of the first times I have ever used the filters
on my camera. It really brought out the mood!

Along with the parts above, she also comes with the standard turret firing effect parts as well as a face plate designed for combat scenes! (∩・∀・)∩ ▲ The large ship parts showing off their power! ★

The shouting face can also have some other uses with the blackboard!! Simply select the pose that you like best! ♪

Be sure to add the cute British ship to your collection!
Nendoroid Warspite!

Purchases of her from the GOODSMILE ONLINE SHOP will also come with a ‘Nendoroid Warspite’ Special Box Sleeve & Special Nendoroid Base & Clear Ocean Display Sheet as a bonus!

Be sure to consider it when preordering! ヽ(*´∀｀)ノ