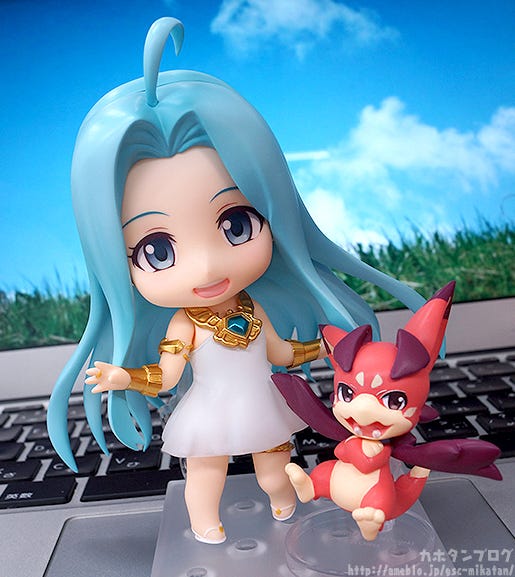 Can you believe we are almost into the second half of 2017 already? I hope everyone has done everything that wanted to do in the first half of the year!

Anyway, today I’m going to be taking a look at…
Nendoroid Lyria & Vee!★ From the anime ‘GRANBLUE FANTASY’ comes a Nendoroid of the mysterious girl who has the power to command primal beasts, Lyria! She comes complete with a Nendoroid version of Vee to fly by her side.

Lyria comes with three face plates including an innocent smile, a gentle blushing smile with closed eyes as well as a more serious expression for combat scenes. Vee comes with both a standard lower body as well as an alternate version that can be used to display him being held by Lyria. Pose the two of them together to recreate all sorts of different situations in Nendoroid size!

“I bestow my power… unto you!”

From the popular anime series that is currently airing, GRANBLUE FANTASY: The Animation comes a Nendoroid of Lyria together with Vee! Lyria’s innocent smile is so dazzling!

Her iconic long, blue hair and the shiny, golden accessories on her arms and neck are all sculpted in lovely detail! ((´д`●))三((●´д`)) ▲ Such intricate detail on her tiny little accessories! He has been sculpted with one ear up and the other one bent out to the side making for a rather cute pose! ▲ He also comes with his owl little base! *Final shape may change. Vee also comes with an interchangeable body that allows you to display him being held by Lyria instead! っ(｡･ω･)ﾉﾞ Lyria also of course comes with special arms to hold him and complete the pose!

Along with the lovely smiling face plate above, Lyria also comes with a different smile with a slight blush and closed eyes! (*´ｪ`*) Don’t you just want to protect this smile?!

She also comes with parts to display her with her hands behind her back in a rather playful pose that matches with her adorable smile so well! I just want to pet her on the head and imagine she is smiling just for me! (/ω＼) Another that I didn’t note above is the details on her feet! The tiny little sandals with the little gold part have all been faithfully converted into Nendoroid size!

But of course Lyria isn’t just all gentle and relaxed! She has the power to command primal beasts, and that more reliable side of her can also be posed with the Nendoroid. (∩・∀・)∩ Her third face plate is a combat expression!

The contrast between this face plate and the gentle smiles above is amazing! Simply find the face plate and parts that you think suit her best! (´□｀｡) Up for preorder from the 31st May!♪

Keep your eyes on the Good Smile Company website for more info! You have until the end of today, the 29th May (Japanese Time) to vote! Which of these designs do you want to see as a Nendoroid by your side next year? Be sure to get your vote in!