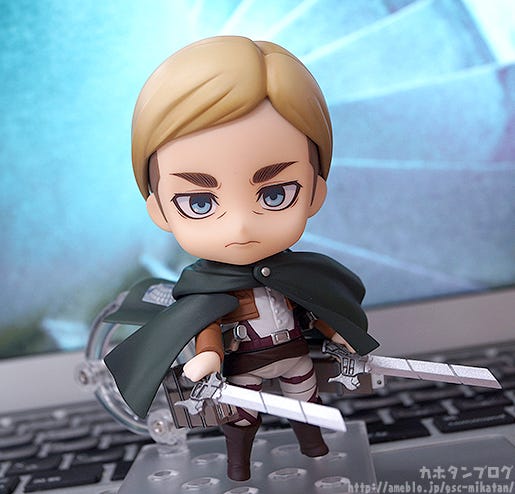 I can’t believe how hot it is even though we are still only in May! I’m not sure if I’m going to be able to survive this Summer…

Anyway, today I’m going to be taking a look at…
Nendoroid Erwin Smith! From the anime series ‘Attack on Titan’ comes a Nendoroid of the commander of the Survey Corps, Erwin Smith! He comes with three face plates including a standard face, a shouting face as well as a smiling face.

Just like the previous Nendoroids in the series he comes complete with his Vertical Maneuvering Equipment, dual blades and effect parts to display him soaring through the air, which allow for amazing combat scenes. Erwin also comes with his Survey Corps cape similar to Nendoroid Levi, as well as an alternate front hair part to display him with his hair loose.

Nendoroid Levi is also scheduled for rerelease at the same time as his release, so be sure to display Commander Erwin with Levi and the other Attack on Titan Nendoroids to bring out the atmosphere in Nendoroid size!

From the anime series with a second season currently airing comes a Nendoroid of the commander of the Survey Corps, Erwin Smith! This was one of the characters selected to become a Nendoroid during the Nendoroid 10th Anniversary Next Nendoroid Survey! (｡･ω･)ﾉﾞ

Thanks again to everyone who voted!!

Let’s start off with a look at Erwin from the back! ♪ His iconic hairstyle has been faithfully preserved from the front and the back! Even in chibi Nendoroid size you can see his sideburns too!

Just like all the previous Nendoroids in the series he also comes with his vertical maneuvering equipment and dual blades! ★ These are the Nendoroids that have been released in the series so far! ☆ You can pose him in the classic saluting pose!

The tightly closed mouth and iconic eyebrows have all been shrunk down into cute Nendoroid size while still preserving his confident, masculine appearance!

He also comes with a shouting face plate which works with this pose nicely to show his devotion! Determined and resolute! I can just imagine Erwin’s voice!

The figure comes with a longer stand allowing you to pose him soaring through the air with his vertical manoeuvring device as well as the included effect parts; perfect for combat scenes! As you may have also noticed his cape is separated into three different parts to easily match the capes movement with various different poses! ♪

Before we take a look at his third face plate, I also want to show off that be comes with an alternate front hair part as well! ε=(｡・д・｡) You can display him with his hair down!

In other words along with the three face plates you can switch his hairstyle around for even more posing potential! The same expression with a different hairstyle can give a rather different impression! (/ω＼)

Moving onto his third face plate! Quite a change around from the combat expressions! He looks so much more kind and gentle with this expression, which allows you to pose him in more everyday scenes! (‘-‘*)(,_,*)(‘-‘*)(,_,*) To summarise, he comes with two different hairstyles, three face plates and the ability to attach and remove his cape and vertical manoeuvring equipment… there are so many different options to choose from for you to select your favorite side of the commander! ｡:.ﾟヽ(´∀`｡)ﾉﾟ.:｡+ﾟ

Add the 13th commander of the Survey Corps to your collection!
Nendoroid Erwin Smith! He will be up for preorder from the 30th May!

In addition, we will also be rereleasing a certain Nendoroid that Erwin would like to have displayed by his side! They will both be up for preorder at the same time, so you can even order them together! Keep your eyes on the Good Smile Company Website next week for more details! ♪

As a side note, both Nendoroid Erwin Smith as well as Nendoroid Levi’s rerelease will be made at Good Smile Company’s Tottori Figure Factory and brought to you with “Made in Japan” quality! look forward to them!!