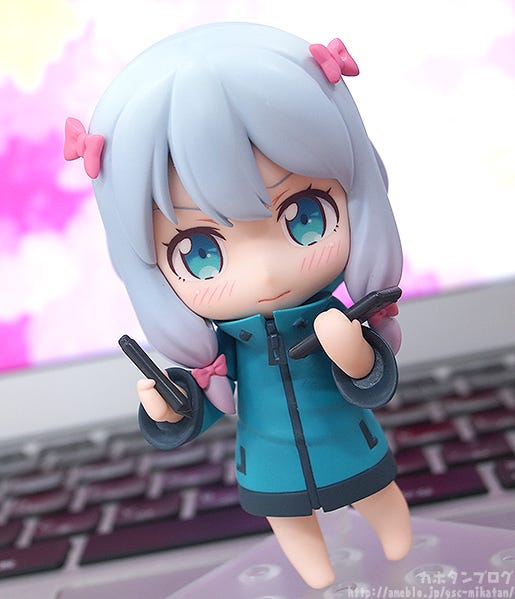 Sometimes I get the urge to eat sour konbu prepared with black vinegar. I even love that white powdery stuff that gets on your fingers when you eat it! Anyway, today I’m going to be taking a look at… From the popular anime series ‘Eromanga Sensei’ comes a Nendoroid of Sagiri Izumi dressed in the hoodie she wears when live-streaming. She comes with three face plates including a cute smile, an embarrassed, upset expression for when she feels helpless toward her stepbrother as well as a shouting expression to have her shouting at Izumi.

Optional accessories include a drawing tablet for her to complete her illustrations as Eromanga Sensei, a pile of manuscript paper as well as the mask and headset she uses while live-streaming. Recreate your favorite scenes from the series in Nendoroid size!

The illustrator known for her lewd drawings, Eromanga Sensei – also known as Sagiri Izumi is joining the Nendoroids! That doubtful expression with a slight blush on her cheeks is so very adorable! ♡

The slightly pink gradient of her hair at the tips, the cute ribbons in her hair and the hoodie that covers up her body and neck almost completely… all the details of her character have been carefully included on the Nendoroid! ▲You’ll have to wait and see what is underneath the hoodie!

In her hand she holds a tiny little pen tablet for drawing! ▲Although it is tiny you can still make out the screen and buttons!

She also comes with interchangeable arms which can be used like this to make a bit of a shy pose with her sleeves pulled tightly in! ♥ The same pose looking upward is even cuter! Up until now I’ve only been taking a look at her upset, embarrassed face, but she also comes with two more face plates! ♥ First up we have a rather cheerful smile!

The kind of expression she has for her brother when she is in a good mood! In her hands she is holding a bunch of manuscript paper held together with a clip! She also comes with headphone parts allowing you to pose her enjoying her illustrations as she live-streams! ((´д`●))三((●´д`)) ▲ Eromanga Sensei enjoying her drawing in the solitude of her room! ♡ … you can just imagine her shouting at her brother! ヽ(●´Д｀●)ﾉ

The wobbly appearance of her mouth is also captured so nicely and suits the Nendoroid so well! She looks so very cute even though she is shouting!!  You can change the pose for all sorts of other situations as well! ♪ ▲ I imagine being hit with a tablet is painful, but the though of making such
a cute little sister jealous about you probably makes it worth it! A paper mask of an anime character is also included!

This allows you to really complete her live-streaming appearance and have her smiling as she draws online!

Be sure to add the skilled Eromanga Sensei to your collection! ♥

She’ll be up for preorder from the 30th May! ♪