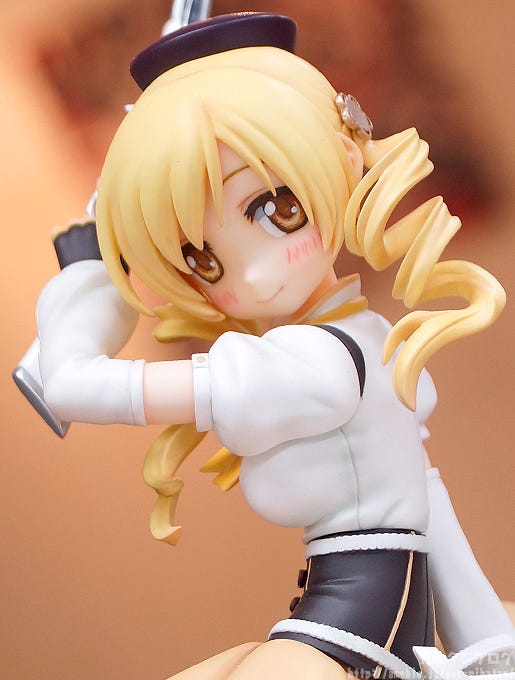 Although it is at a rather late time period during the live broadcast, I’m really looking forward to the Hobby no Tora corner this WonFes broadcast! I hope some of you will join in on the fun! (∩・∀・)∩

Anyway, today I’m going to be taking a look at a product currently up for preorder…

From ‘Puella Magi Madoka Magica The Movie: The Beginning Story / The Everlasting’ comes a scale figure of Mami Tomoe in her Puella Magi outfit. The figure is based on the original key visual for the movie, originally illustrated by character designer Ume Aoki.

Her skirt billowing in the wind and various other intricate details have been carefully included on the figure for fans to enjoy in their collection. Be sure to display her with the previous released characters from the series!

The figure is based on the key visual drawn for the movie edition of the anime, illustrated by the character designer Ume Aoki! The unique floating pose and atmosphere of the series is captured so nicely with the figure! (●‘∀‘●)ﾉ

A look from the back!! The round skirt and long legs that extend out from it, as well as her iconic curly hair, plume hat and more have all been faithfully included and details from the front all the way to the back! (‘-‘*)(,_,*)(‘-‘*)(,_,*)

Her magical musket is also included, sculpted in intricate detail! ♥ ▲ It has a bit of a fairy-tale look, but don’t doubt the firepower!

This is actually the third figure in a long ongoing series of figures from the series! Plus there are already two more Puella Magi on the way to join the series! Both Sayaka and Kyoko have already been announced! *The photos above are from last year’s WonFes! Just like the previous two figures in the series, the attention to detail on the creases and flow of her clothing was one of the main points kept in mind while sculpting! ヽ(●´Д｀●)ﾉ The way the fabric around her chest is being pulled…. you can make out the shape and the pull of gravity beneath the outfit so clearly!

The appearance of her hair accessory has also been faithfully preserved!♪ A closer look below and we find an amazingly intricate ribbon and dainty fingers that have a rather glamorous nail polish! ♪ ▲ The creases in her skirt where her hand holds it down are impeccable! Those gentle eyes looking down on me… I can just imagine her calming voice speaking to me!!

Be sure to add Mami-san to your collection!