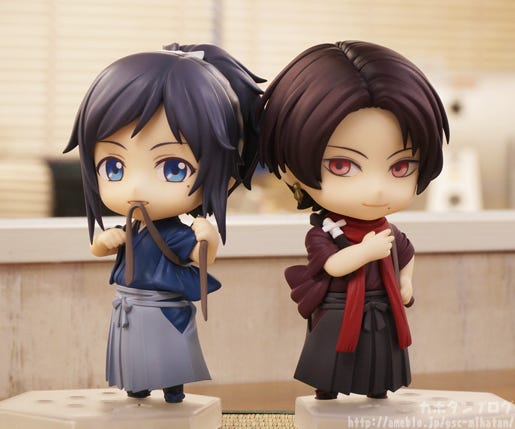 “Our citadel is the Hanamaru today too”

Unfortunately the ‘Touken Ranbu -Hanamaru-‘ anime series came to an end last year, but there are still figures from the series on the way! Both Kashu Kiyomitsu & Yamatonokami Yasusada are being released as Nendoroid Co-de figures wearing their uchiban outfits!

For those who are not sure what Nendoroid Co-de are, they are more simply Nendoroids that don’t have all the articulation and are instead in a static pose! You can take them right out of the package and put them on display just like that! The face plates can still be swapped out with other Nendoroids through, and the neck still features a joint for adding different nuances!

Anyway, let’s take a closer look at each of them! ▲ He is posed in the midst of tying up his dark blue haori jacket! He has the strap held in his mouth to bring out that playful side of his personality! (*´∀`*)ﾎﾟｯ ▲The lovely bushy look of his ponytail hair looks great in Nendoroid size!

From the back you can get a better idea as to what exactly he is tying up! The strap comes out to be really small in Nendoroid size but even so we have ensured the design has remained nice and detailed! Plus the hakama has been painted with a slight gradient! (｀・ω・´) ▲ As you can seem you can also pose him without the strap in his mouth!

▼ Based on the key visual! The figure is based on the first key visual that was revealed for the anime series, so if you look at him from this angle it makes for a faithful rendition of that illustration! ▲Kashu’s kimono has a nice blend of his red image color and just look at that stunning gaze! The kimono is actually the same design as Yamatonokami, but the colors and way he is wearing it are different which leads to a rather different appearance! ♪

Plus you can also use this expression with the previously released Nendoroid Kashu Kiyomitsu allowing for even more display options!! As a side note, this Nendoroid was completely re-sculpted from the ground up based on the anime series designs, so there were no parts that are re-used for the Nendoroid Co-de Kashu! ▲ Kashu-kun has already managed to tie his strap up! A very cute tie as well!! The creases all over the material, little straps of the sandals and various other little details really make him special!! ▲ The hair just slightly brushing over his eyes gives him a rather sexy look! His left hand is actually posed slightly adjusting the length of the strap which of course makes it such a nice match to display him with Yamatonokami Yasusada!

Preorders open from the 7th February 2017!

In addition, preorders from the GOODSMILE ONLINE SHOP will also include these items as a bonus! Be sure to consider the bonuses when preordering! ╭( ･ㅂ･)و ̑̑ ▲ Nendoroid Co-de Mikazuki Munechika: Awakened Co-de is currently available for preorder from the GOODSMILE ONLINE SHOP! You can even grab them all together to save on shipping!