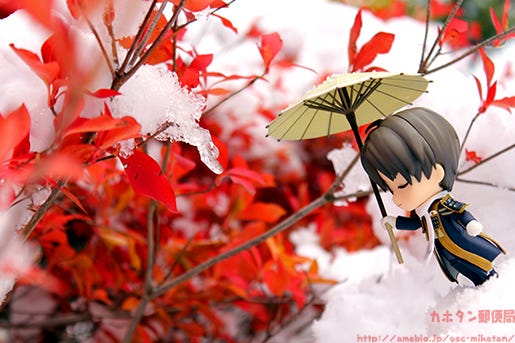 Today I’m going to be taking a look at some of the photos that fans have been sending in to become my next Twitter header!! You can find part one of this photo collection over at the link below!

The theme this time around was…

As usual the photos were just overflowing with love for the figures and the series that they come from!! A huge thank you to everyone who took the time to send in their photos!♡

I already announced the photo I chose to use as my Twitter header a few days back – it is this lovely photo sent in by Sa!  (✿´ ꒳ ` ) “Winter Harvest”
The world is always so different and enjoyable from a Nendoroid’s point of view.

The graceful atmosphere with Nendoroid Heshikiri Hasebe standing so peacefully puts my spirit at rest! It’s amazing what you can recreate in a photo with different colors, compositions and situations! I’ll be happy to see this whenever I go to Twitter!! Thank you so much for the lovely photo!

Anyway, let’s take a look at some of the other photos I received! ♪
■□■□■□■□■□■□■□

Two years back, I went to Fushimi Inari-taisha in Kyoto and took this photo. It was unbelievably cold though! The chilly air really comes through in the photo! Snow Miku’s pale skin matches with the surroundings so beautifully, and the trees in the background being hit by the sunlight to give off a nice glimmer of light really make for an amazing photo! The sword boys look so happy with their delicious looking dinner!! The accessories including the little cushions for them to sit on really bring the photo to life! ♪

Snow Miku: “Hey… is the train still not here?”
Nothing says Winter more than Snow Miku! ☆ Waiting for the train in the cold isn’t the most fun of experiences, but if you have a Snow Miku with you it can be a lot more fun! The cute face plate from Nendoroid Chino also suits her so nicely! ヽ(*´∀｀)ノ So many lovely sparkly effects create a rather romantic appearance! I would love to get a Christmas card like this! I also wish I has the artistic sense to make something as lovely as this!! (/ω＼)

I found a rare ‘Miku Bug’ in a dead tree. It seems she was preparing for the Winter, but she looked rather lonely… I am amazed simply at the idea to turn Miku-san into a new species in the preparation for Winter…! She has that look on her face that says it’s too cold to move anymore – I know that feeling rather  well. ♪

A warm photo of Shigure relaxing to keep you feeling warm during the cold Winter months! Such lovely accessories as well as a perfect pose for Shigure! I wonder what she is writing? Does it have something to do with the radio? There are so many details in the photo to let your imagination create a little story from the scene!

Mountain hiking with Homuhomu! Pure white peaks and a clear blue sky! This is what “Heavenly Blue” refers to!! The blue skies and white mountains make for a such a refreshing look! It looks like a painting!! I’m sure it must always be fun to climb any mountain with Homura-chan by your side! ( >ω< ♡)

Photo taken with the Olympus PEN Lite 7! I made use of some filters for a more icy effect! The pose shows Magical Snow Miku just about to use some of her amazing magic to create some snow for the snow festival! A mystical photo that creates a wonderful atmosphere! The Sapporo Snow Festival starts today! I think her magic is going to work quite nicely this year! ★

I tried to capture a Winter photo at the end of my travels this season, but it became more of a mixture of the seasons… It’s as if the season is trying to change over to Winter now and Snow Miku is shouting… “This is my season!!”! (^_^) I can just imagine Snow Miku shouting out in happiness looking at this photo! Complete snow is always a lovely sight, but these photos that show the start of Winter also have their own special charm!  (∩・∀・)∩

I wish I can go to Japan and enjoy hot spring during winter! Mikazuki Munechika in a hot spring?! Swapping parts around with various Nendoroids allows for all sorts of opportunities! Looking at him so relaxed in the hot spring makes me feel just as relaxed too! ★

I want to Disneyland with Miku-san the other day! The various lights in the background match with her angel wings to create a truly angelic Miku-san! The lighting in the photo is really nice! I hope you and Miku-san were able to make some wonderful memories in the land of dreams and magic!! I haven’t been in ages myself… I think it’s time to go again! ★ A girl’s pajama party! I love photos like these!  *｡(●´Д｀人´Д｀●)｡* ﾟ
I wish I was one of those kitties by their side to enjoy it with them!!

Happy New Year!! Seen it’s the New Year I decided to send in my Lion Dance Miku-san! I’m looking forward to many lovely figures in 2017 and wish everyone at GSC the best! Lion Dance Miku is in such a lovely pose, and the background and accessories are all matching up nicely to create such an amazing atmosphere! Thank you for all the good wishes, and we hope you have a great figure filled year too!! (*´ｪ`*)

I took this photo in my home with using my little studio for photograph little products.
I photograph figures every holidays and fortunately, I saw that link and decide today’s theme is Winter.

This photo is mixed with Snow Owl And Hoshizora Rin because I’m big fan of Love Live.
Also I thought Rin is good at harmonize with Snow Owl and beautiful with this theme, so I mixed and photograph this photo. The kitties from the Nendoroid More series are covered in the powdery snow adding even more cuteness to the photo!! ♪

“Snow, Kyoto and a White Kimono”
There was rather heavy snow, so I went out to Arashiyama in Kyoto with my White Kimono Miku-san. It was rather cold, but a very fun expedition! You’ll never get to see lovely snowscapes unless you are willing to brave the cold weather! This photo proves it’s worth the cold!! The various little homes between the mountains make for an amazing location!

Winter means a lot of rain and chilly winds here! Stay warm and dry with Aoba, Clear, and Ren!
“Wah rain! Good thing you have an umbrella Clear.”
“Please stay close to me Aoba-san, I’ll sing a song to pass the time.” A simple composition that shows the close relationship between Clear and Aoba! Just looking at the photo makes you hear a conversation between the two of them like the one awkwarduck placed in his comment above! ♪

A photo of Snow Miku Dayo- in the snow. Huh?! Why is a staff member sending in fan photos to my email?! It is still a lovely photo though! Those who want to see more of Hamako’s photos can follow her on Twitter here: @gsc_hama!★ It’s so easy to want to fall asleep under the kotatsu! A lovely photo that captures the everyday life of the sword boys in their home! The details put into the background and accessories shows Yuna’s dedication to her citadel! I want to see more!! Your excitement and love for the snow really comes through in your comment! The two-shot of Snow Miku and Sonico makes it look like they are communicating with each other with their eyes! ヽ(ﾟ∀ﾟヽ 三 ﾉﾟ∀ﾟ)ﾉ

Sweet little Akashi wanted to take a picture to send Christmas cards to all her friends. She looks a little embarrassed about her rather ladylike winter outfit! The leaves and melted areas in the snow create a lovely photo that really brings out Akashi’s charm!! (´□｀｡)

The snow has piled up outside and thus Nendoroid Snow Miku is having trouble deciding what to wear while figma Snow Miku gently looks on and has some recommendations! There are various little hints to the previous Snow Mikus in the photo, so take a look out for them! A photo filled with playful spirit!! I wish I could come up with ideas like this!! The memories of all the other Snow Mikus are hidden within the photo for fans to find! ヽ(*´∀｀)ノ

The photo really shows just how much you love your Snow Mikus! ♡

So many lovely photos filled with love for winter and love for figures! I hope everyone enjoyed them all as much as me!

Thanks again to everyone who sent in photos!!

I’ll be looking for photos for the next header in March sometime!