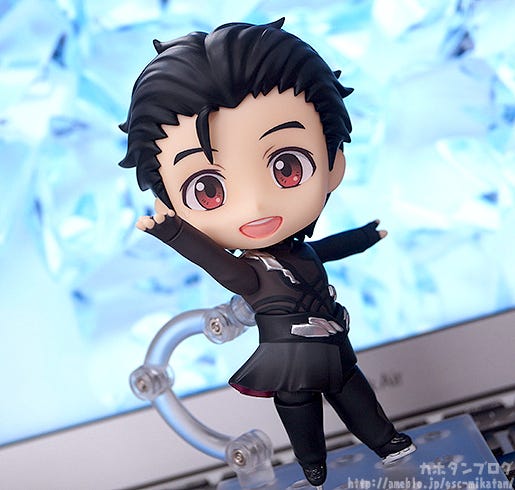 Today I’m going to be taking a look at…
Nendoroid Yuri Katsuki! From the popular anime series ‘YURI!!! on ICE’ comes a Nendoroid the figure skater with the most sensitive glass heart – Yuri Katsuki! He comes with three expressions including a smiling expression, the ‘eros’ expression he had during his short program as well as an embarrassed expression.

You can easily pose him skating as if in a skating competition, but he also comes with alternate hair parts, glasses and a smartphone to recreate his standard appearance as well! His favorite food ‘katsudon’ is also included allowing for even more everyday scenes from the series! Be sure to add the skater that become stronger through love to your collection with Nendoroid Yuri Katsuki!

“I’ll make it up to you with my skating!”

From the figure skating anime ‘YURI!!! on ICE‘ comes a Nendoroid of the main character, Yuri Katsuki! The anime series captured the hearts of anime fans all over the world as well as figure skaters impressed with the realistic skating animation!! The series has finally come to join the Nendoroid series!!

Yuri’s lovely smile as he slides along the ice with his hair back all looks so perfect!! The sculpt and flow of his hair is so nicely done and the fact that it’s not all perfect captures that his personality nicely! ▲ The little ice-skates are so cute in Nendoroid size! ☆

The Nendoroid has been sculpted wearing Viktor’s World Juniors outfit! The sculpt and paintwork not only capture the appearance of the outfit but also the textures of the material! The stylish design is filled with so many lovely details to enjoy! ε=(｡・д・｡) ▲ Note the inside of the material is faithfully painted a deep red! ♥

Even though the outfit doesn’t show off any skin, the way it sticks so closely to Yuri’s body-line provides a very sexy appearance!! And to match the the sexy appearance he also comes with the perfect face plate! This expression captures Yuri’s expression from his short programme “In Regards to Love: Eros”. The sudden serious look contrasts so nicely with the innocent smile of his first expression! Ah! Yuri is holding his hand out to someone! I’m sure we all know who is on the receiving end!

As you can see, the Nendoroid comes with a nice variety of parts such and bent leg and arm parts, open hands and closed hands which can be used to create all sorts of poses from the series! ♪

Let’s move onto his third face plate – an embarrassed expression! ♥ Those blushing pick cheeks… the tiny drop of sweat…!

The wiggly look of his mouth also captures the somewhat shaken feeling that often came with Yuri’s personality! In his hand he is holding his smartphone! ♪ The patterns on the back are one thing, but even the button on the front has been faithfully included on the design! ☆

Not to mention that you can enjoy his more standard appearance with alternate hair parts with his hair let down as well as his glasses!!

The glasses can be attached and removed from the face plate! ▲ Playing a little prank on Yuri!

The alternate hair parts can also be used with any of the other face plates for a slightly different appearance!

▲ Gently making a fist… proud of his practice!
I personally prefer him with his hair down even with the more serious expressions, so this option was a lovely discovery!

You simply have to find your favorite combination! (∩・∀・)∩

However, last but not least… He also comes with a Katsudon!
The attention to detail on the tiny part is incredible!! You can even see the texture on the cutlet!! ♥ ▲If he eats too much he’s going to put on weight, so be careful!

To summarize, the Nendoroid comes with various optional parts, two hairstyles, glasses and various expressions to choose from allowing for all sorts of posing possibilities! ヽ(●´Д｀●)ﾉ ▲ You can also have the hair up with an embarrassed look!

Be sure to add the figure skater with a glass heart to your collection!
Nendoroid Yuri Katsuki!

In addition, orders from the GOODSMILE ONLINE SHOP will include this Nendoroid Plus Rubber Strap: Yuri Katsuki as a bonus!! ★ Plus… Nendoroid Viktor Nikiforov is also in the works!