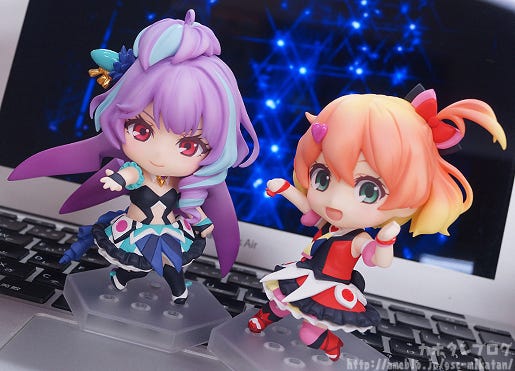 I will happily dress up if it means that I can get some sugary treats!! There are quite a few people dressed up today in the GSC Offices!! Anyway, today I’m going to be taking a look at the latest in the Nendoroid Co-de series! The two main vocalists of Super Dimensional Venus also known as the Walküre tactical music unit are joining the Nendoroid Co-de series!! Both of their outfits are so colorful and the unique hairstyles have been faithfully converted into Nendoroid size in lovely detail!! ♥ From the popular anime series ‘Macross Delta’ comes a Nendoroid Co-de of the mysterious vocalist of the Walküre idol group – Mikumo Guynemer! She is wearing the stage outfit that she wore during various lice concerts in the series! Be sure to display her with Freyja Wion and recreate the two of them performing together on stage!

The unique form of Mikumo’s silky hair from the top bunch to the curls at the front are all so adorable! The colors are also fantastic!! ♡

The frills of her outfit as well as the large ribbon at her hips also look great, and the areas of bare skin you can see between the gaps of her outfit make for all sorts of highlights!! ♪ ▲ The shape from the back has also been faithfully chibified!

If you look close you can actually see the outfit shows off her little belly button!! It’s quite hard to see from the photos, but the belly button is actually sculpted on the design – you can feel it for yourself when you add her to your collection!! From the popular anime series ‘Macross Delta’ comes a Nendoroid Co-de of the artless, innocent girl who joined the Walküre idol group as the fifth member – the Freyja Wion! She is wearing the stage outfit that she wore during various lice concerts in the series! Be sure to display her with Mikumo Guynemer and recreate the two of them performing together on stage!。

The gradient paintwork on her fluffy looking hair together with the heart-shaped rune all look lovely in Nendoroid size!☆

As you can see from the back, both sides of the hair are fluffed outward to create the airy, light appearance of her hair! ▲ Detailed all the way to the bottom!

Her little Nendoroid tie and blouse are sculpted moving around giving a nice dynamic pose to the figure that really brings the energetic Freyja to life!! ♪ Both of the figures also include careful paintwork – you can see certain accessories on the outfit have a glossy paint for different textures that help the Walküre girls stand out! (*´ｪ`*) Here you can find out more about the Nendoroid Co-de series as well as see all the products that have joined the series so far! ☆

But let’s get back to the Super Dimensional Venus girls!

As mentioned above, Nendoroid Co-de are separated into four different parts – the head, upper garment, lower garment and shoes. This means that you can switch these parts around with other Nendoroid Co-de figures for all sorts of interesting combinations! For example… And the exact same switch but in reverse looks just as cute!! ♡ There are all sorts of potential combinations of outfits with other characters, so be sure to come up with all sorts of original coordinations! ☆

Add the intergalactic songstresses to your Nendoroid Co-de collection!

They will be up for preorder tomorrow! ♥

Be sure to check out the Good Smile Company Site for more details!

There are quite a few figures with preorder deadlines coming up this week! Be sure to check the deadline list below for more details! (∩・∀・)∩