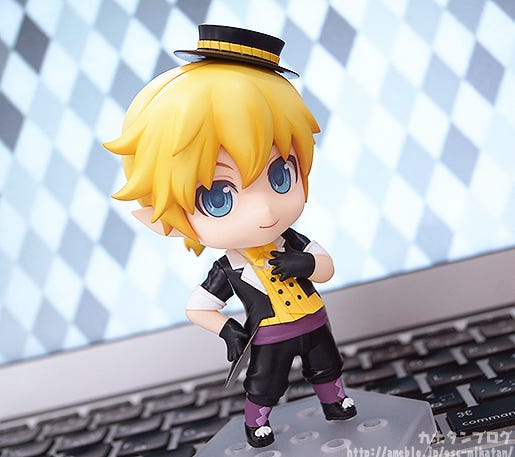 We’ve got to the season where getting into a nice warm bed is such a pleasure… and waking up in the morning is so much harder! I keep wanting  to hit that snooze button!!

Anyway, today I’m going to be taking a look at this figure that went up for preorder today! A special poll was taken as a part of the Nendoroid 10th anniversary to decide which module from the Hatsune Miku -Project DIVA- X game would be made into a Nendoroid Co-de figure! The winner of the poll was none other than this ‘Trickster’ module for Kagamine Len!

The Nendoroid Co-de figure faithfully captures the original design illustrated by Tama, giving Len a cute yet cool appearance with a magical twist! The small hat he wears as well as his pointed ears have all been faithfully preserved on the figure, and the hat can also be removed for a slightly different appearance! Be sure to add the charming Trickster Len to your collection!

“Are you going to fall for the love trick tonight?”

Len looks so cool and composed and yet still has an element of cuteness!! The Trickster Co-de suits him so perfectly!! The outfit is perhaps best known from the video for the ‘Yumekui Shirokuro Baku’ song – and it has been faithfully converted into Nendoroid size keeping all the details! ♡

His stylish hat, tailcoat jacket and black gloves give a bit of a mysterious atmosphere! ▲ The hat can also be removed!

While the design is classy for the most part, the diamond patterns on his socks and the yellow vest and bow-tie also give a bit of a playful feeling to the outfit! ♪ The tied-up hair is so cute!

The ponytail is very short so you can’t really tell it is tied up from the front, but as soon as you look from the back or the sides it stands so so clearly!! You’ll also note that he has pointy elf-like ears!! ( ・ㅂ・)و ̑̑ ▲ They give him a bit of a mischievous look!

Here you can find out more about the Nendoroid Co-de series as well as see all the products that have joined the series so far! ☆ As mentioned above, Nendoroid Co-de are separated into four different parts – the head, upper garment, lower garment and shoes. This means that you can switch these parts around with other Nendoroid Co-de figures for all sorts of interesting combinations! For example… In addition, the Nendoroid and Nendoroid Co-de figures both make use of the same head joints, so you can easily combine the heads from your Nendoroid collection and dress them up in Trickster style! There are countless options to try!! (*˘︶˘*).｡.:*♡

Be sure to add this Len-kun to your collection!

He is currently up for preorder! ♡

Plus, orders from the GOODSMILE ONLINE SHOP will also include this Special ‘Trickster’ Badge was a bonus!☆