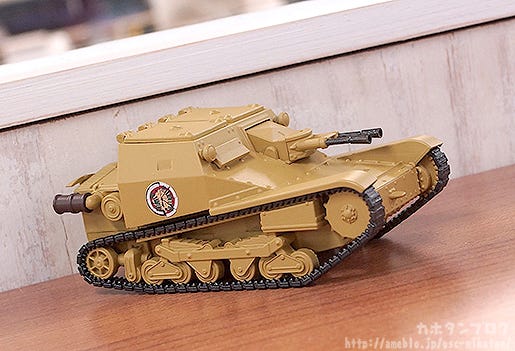 For some reason I regularly feel like eating spaghetti napolitan! Just thinking about it makes me hungry!! (›´ω`‹ )

Anyway, today I’m going to be taking a look at the latest in the Nendoroid More series… From the popular anime film ‘Girls und Panzer der Film’ comes a series of tanks to join the Nendoroid More series. The second in the series is the tank that played a big role in the film – the Carro Veloce CV-33 (L3/33) tankette used by Anzio Girls High School!

The details of the tank have been carefully preserved while shrinking the tank down to cute Nendoroid Petite size, and the hatches on the top of the tank can be opened and closed allowing for more playability! Be sure to display the tank together with the Nendoroid Petite: Girls und Panzer series!

One of the tanks operated by Anzio Girls High School!

That compact size makes the tank both highly maneuverable and also so cute! But even with such a small size it is very intricately detailed and keeps its unique appearance perfectly! ♥ The logo on the side that looks like a pizza as well as the little details on the caterpillar tread have faithfully been included!  (●‘∀‘●)ﾉ” The little details on the back are also beautifully detailed! It may be chibi-size but that doesn’t mean it isn’t faithful to the original!

For those unaware, the Carro Veloce CV-33 or L3/33 was a tankette originally built in 1933 and used by the Italian Army before and during World War II!

While the tankette only had a machine gun as a weapon and rather thin armor, it was a cheap and easy to produce tankette which was exactly what the growing Italian army needed at the time it was in use! CV is a acronym for Carro Veloce which means ‘Fast Tank’ in Italian! ♪

Let’s see what happens when we get Anchovy from the Nendoroid Petite: Girls und Panzer set to ride in her tank!! (Anchovy was the secret character from the set – she is sold separately!) As you can see, the hatch on the tank can open and close allowing a Nendoroid Petite figure to ride inside!!

▲ Both the left and right hatches can be opened! ♪

This is also an upgrade over the previous tank, as the opening and closing doesn’t require any replacing of parts!

It doesn’t feature any motors or anything, but it does come with this little feature! ☆

Here is a photo together with my iPhone so you better compare just how small and cute they are!! Plus if you look on the underside there will be even more little details on a part that you’d probably never even get the chance to see!! ♪ Just look at those little bumps and circles that show the details on the underside of the tank!! This could actually be quite useful if you wanted to recreate a scene where the tank had been blown onto its side in battle!! (/ω＼)
(I can just imagine the surrender flag popping up behind it!)

Be sure to add the cute little tank yo your collection! It will be up for preorder tomorrow!☆

Keep your eyes on the Good Smile Company website for more details!!

Next week Good Smile Company and Max Factory will be attending the Oarai Ankou Festival, where we will have lots of Girls und Panzer products on display! (∩・∀・)∩

These two tanks have already been announced! Look forward to them!