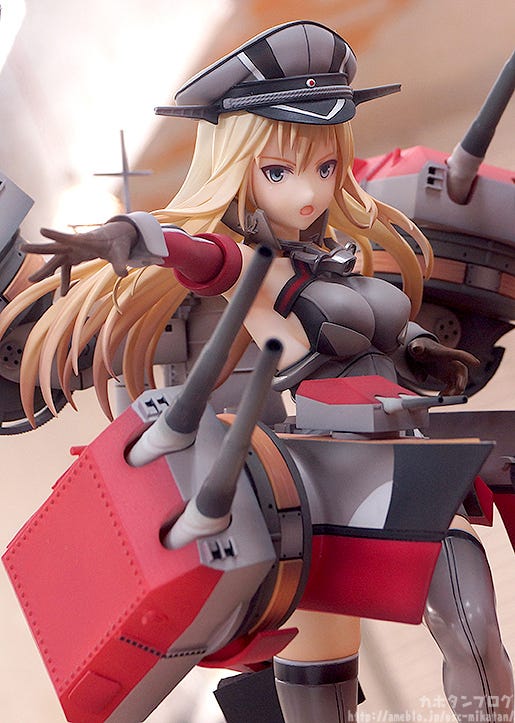 Today I’m going to be taking a look at…
Bismarck Kai! From the popular browser game ‘Kantai Collection -KanColle-‘ comes a 1/8th scale figure of the name ship of the Bismarck-class battleships – Bismarck! Her classic pose from the game has been carefully converted into a figure that preserves the feeling of her dashing forward with a lovely dynamic pose.

The powerful ship parts that also boast being the largest of all the German ships in the game have been completely included and feature a heavy appearance through meticulous paintwork. Her hat can be attached and removed for a slightly different appearance, and the ship parts are articulated at various points allowing for all sorts of fun to be had posing even on a scale figure! Be sure to display her with the previously announced Prinz Eugen who is scheduled to be released in January next year!

“Guten Tag. I am the nameship of the Bismarck-class battleships – Bismarck. Don’t forget that name.”

The nameship of the Dutch Bismarck-class Super-dreadnoughts, Bismarck is becoming a scale figure in her upgraded ‘Kai’ form! The black and red color scheme of her Kai version gives her such a stylish appearance that has been preserved on the figure perfectly! The red paint on the top of the turrets and the Balkenkreuz design on her red arm band also stand out really nicely! ♪

But the first thing to note is of course her impressively sized ship parts!! (∩・∀・)∩

This is the kind of firepower that shows what it means to be a super-dreadnought!! ▲ Most of her body is covered up by the ship parts from the back!

The figure is placed in a somewhat forward-bent posture which gives the figure a really impactful dynamic appearance!

Looking at her from the sides gives an even better feeling for the sheer volume of the ship parts! ▲ This angle… so close and yet you can’t quite see too much!

But the size is certainly not the only highlight! The amount of detail on the ship parts is such a pleasure to look at!

Look at the details on the ship deck! All the little details about the ship have been included on the design, preserving the dignified and beautiful look you’d expect from German-engineering! ヽ(ﾟ∀ﾟヽ 三 ﾉﾟ∀ﾟ)ﾉ

But there is still another aspect to these ship parts that makes them even more amazing! They don’t just look great…

They are also articulated!

▲ The possibilities are endless!

In other words, not only do you get to see the usual high quality sculpt and careful attention to textures and detail that comes with a scale figure… you also get to enjoy moving the parts around and creating a little bit of action for Bismarck!! ☆

In addition to all the moving parts, her hat can also be removed for a rather different appearance! The choice is up to you, Admiral! ♪ ▲ Without the hat she looks a little big… younger!

Anyway, most of this blog has been focusing on the amazing ship parts… but Bismarck herself also looks amazing, with a body ready to contend with the very best!! (/ω＼)

Her bosom boasts an impressive size and yet still has a rather dignified appearance! Her bare back shows off the bumps of her shoulder blades! And perhaps my personal favourite… It’s not just that the knees have such a nice round, shiny appearance but the fact that you can actually make out the bones of her knee!! That shape you can only really achieve with a bent leg has been captured on the figure so brilliantly, and the long socks that cover up the knee only make it look all the more amazing!!

Be sure to take a nice close look and a nice good feel of all the details once she joins your collection! I personally recommend running your fingers along the perfect curves of her legs!! (｡･ω･)ﾉﾞ

Add the powerful super-dreadnought to your collection!
Bismarck Kai! Keep your eyes on the Good Smile Company website for more information!