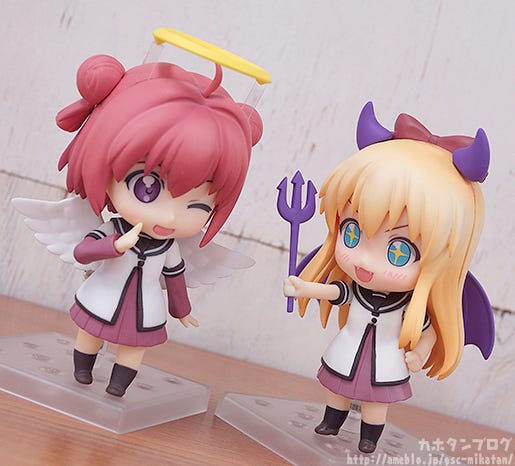 I am just about to board the plane back to Japan! I have been in Taiwan over the weekend to attend a Thunderbolt Fantasy event that was held here!!

Anyway, today I’m going to be taking a look at a selection of products that have recently been announced for rerelease! Akari is dressed in her Nanamori Middle School uniform and comes with a number of extra parts that help you recreate popular scenes from the series including the opening scene at the beginning of the first season, the rather embarrassing scene where Akari first introduces herself and even the kiss scene where something rather important is taken from her! Her hair buns can also be taken off, and together with the included effect parts you can recreate the ‘Hair Bazooka’ scene!

Nendoroid Kyoko Toshino
From the anime series ‘YuruYuri Nachuyachumi!’ comes a rerelease of the flamboyant member of the Amusement Club – Nendoroid Kyoko Toshino! She comes with three face plates including her standard smiling expression, an expression with sparking eyes for her encounters with rum-raisin ice-cream as well as the American comic-based expression that appeared in the original manga!

Optional parts include a spoon and ice-cream that allow you to pose her enjoying her favorite rum-raisin ice cream as well as parts which display her taking the poses of ‘Magical Girl Mirakurun’! She also comes with long-sleeve parts to recreate her Winter uniform! Be sure to display her with Nendoroid Akari Akaza who is being rereleased at the same time!

Two of the Amusement Club members from Nanamori Middle School are coming back to the Nendoroid series! ♪

Akari is Nendoroid number 268, while Kyoko is number 479! It feels like just the other day they were first released and yet now the series is already well over 600 in number!! Time flies so fast!! For those who haven’t been keeping up with the latest released, the highest number to be announced so far is Nendoroid Hatsune Miku: Magical Mirai 2016 Ver. which was Nendoroid number 673! (´□｀｡)

Back to the YuruYuri Nendoroids, one of my favorite poses with these two is to use Akari’s arms on Kyoko together with the ‘Akkariii~n’ background sheet to create this scene…

“I am the true main character!” These Nendoroids are a load of fun by themselves but as you can see having both opens up so many more possibilities!! ★ ▲ This expression was captured so perfectly for the Nendoroid!

Akari comes with her Winter uniform, but Kyoko comes with interchangeable parts which can change the uniform into the Summer version! ▲ Akari can hold the want to become Mirakurun herself!

The background you can see in these photos is based on the clubroom for the Amusement Club, and is included as the inner cardboard sheet of Akari’s packaging! ヽ(ﾟ∀ﾟヽ 三 ﾉﾟ∀ﾟ)ﾉ It’s amazing how much more the atmosphere of the series comes out when you display them together with the background! I highly recommend making use of it if you add them to your collection! ♪

Plus, another item that has been announced for rerelease is none other than the Nendoroid More: After Parts 01, which you can use to create Angel Akari and Devil Kyoko!! ヽ(*´Д｀*)ﾉ━ｨ I figured this would look good, but I never expected it to work quite as well as it did!! They look so adorable like this and Kyoko’s hand for holding the staff works perfectly for the devil pitchfork!!

By the way, the After Parts 01 has special extension parts for the wings that allows them to be used on characters with long hair!! Kyoko is making use of the attachment part for this photo! ▲ Looking from the back you can see where the attachment!

Characters with shorter hair can simply attach the wings to the connecting point on the back, but those with longer hair will be need to have this attachment! It still looks very natural from the front! (∩・∀・)∩

In addition to the parts above, the Nendoroid More: After Parts 02 are also going up for rerelease! That set features cat and bunny ears!! Be sure to check them both out below! ☆ *Certain parts may not be compatible with certain Nendoroids, depending on the character design.

Orders from the GOODSMILE ONLINE SHOP are open until the 5th October 2016 at 21:00JST!! Make sure you don’t miss out!!

Make sure you don’t miss out this time around! You might not get another chance!! ♪