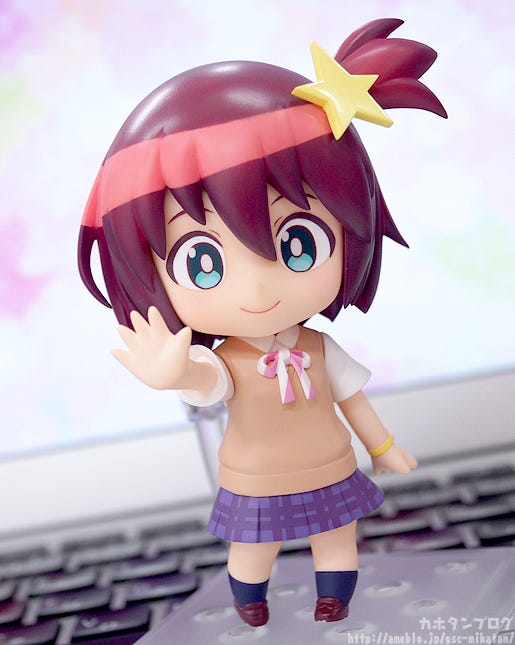 I love having breakfast that includes thick-cut bacon, but most days I just end up eating sweet breads! They do say it’s good to get some sugars in the morning!

Anyway, today I’m going to be taking a look at…
Nendoroid Luluco!☆彡 A Nendoroid of the Space Patrol Officer from OGIKUBO – Luluco!

From the anime series Space Patrol Luluco comes a Nendoroid of the normal middle school girl who lives in OGIKUBO – Luluco!! The highlighted hair and the cute way she ties it up to the side, the chequered mini-skirt and vest with a ribbon have all been faithfully converted into Nendoroid size! ٩( ‘ω’ )و
This is how she looks from the back! △ The little tuft of hair tied up on the right is so very cute!

As you may have noticed in the first image, she comes with a special hand part to recreate the perspective of her famous pose! The hand is around three times bigger than a normal hand part! You can find out more about the reason for this giant hand over on the GSC Lab blog who have been running a special series following the development of Nendoroid Luluco! (・∀・) (Japanese only) Anyway, let’s get back to today’s review with a look at Luluco’s other expressions! Luluco is well known to be rather expressive with her facial expressions, and these face plates really capture her nicely! ☆

“Let’s just go with you frozen!
I need to clock in to work!” Recreate the scene in episode one where Luluco’s father Keiji needed a ride with her to the Space Patrol OGIKUBO headquarters on a trolley after becoming frozen!

The trolley is included, and a papercraft version of Keiji is included to recreate this scene which fits with the surprised expression perfectly! ★

“Should the Space Patrol really be acting like this?” The perfect expression for how a middle school student should react to the General Manager’s rather abrupt reactions! Moving on, let’s take a look at the included optional parts! We’ve already seen the trolley and papercraft Keiji that are included, but she also comes with…
– Keiji Quarter Pounder – The reawakened version of Keiji thanks to the handiwork of the General Manager and Hissho! The little mouth-like thingy is even included! It’s so cute and tiny! ♪

You can even have her hold him if you balance it carefully! ε=(｡・д・｡) △ A two-shot of father and daughter for the photo album! ♡ The light that pops out her head and lets out a loud siren when there is a space crime going on! △ You can see the siren part inside!!

This also means that you can connect it onto most other Nendoroids as well! Whenever I see this patrol light I always think of the Awake! Judgment Gunmorphing!! voice! Those of you who want to enjoy Luluco in her Space Patrol suit as well can pick up this product too! ♪ It can fully transform just like in the series! (/ω＼) Both are going up for preorder tomorrow, so you can easily preorder them together! ((＞д＜))

Recreate all sorts of scenes with the fun expressions and optional parts!
Nendoroid Luluco!

I can’t wait for the last episode to air! I hope everyone enjoys it!! (σ・∀・)σ

The WONDERFUL HOBBY LIFE FOR YOU!! 24 site is open!! You can see more information about this year’s Wonder Festival booth at the official page below!