From the 21st August…
FamilyMart will be running the Miku Happy Lots!!

The exact starting date does vary between stores, so take note of the dates for your local store!

The A-prize and B-prize for the Miku lots were made by Good Smile Company! I managed to grab some samples so I’ll be taking a look at them today! 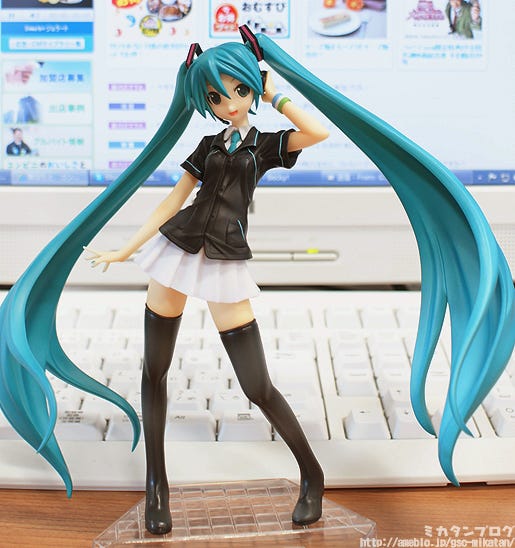 A 1/8th scale figure of Miku wearing a FamilyMart staff uniform! She definitely has a different feeling about her wen wearing this! 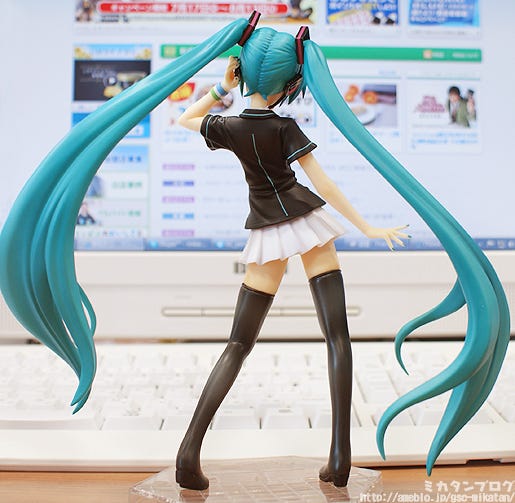 The posing is identical to the previously released 1/8th scale Miku figure, but those who go to FamilyMart often will feel quite close to home seeing her in this uniform! I wish Miku would really serve me next time I go to FamilyMart!! 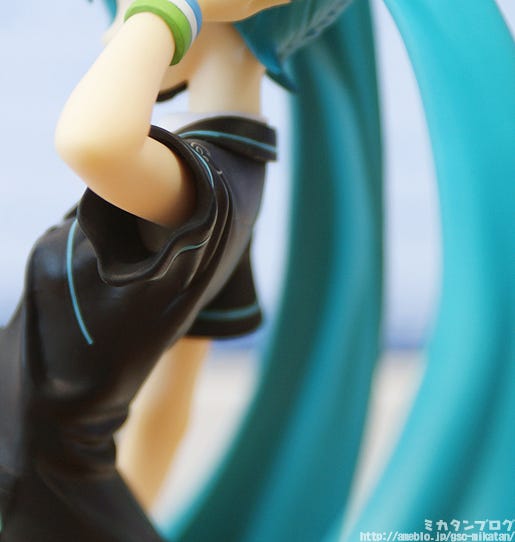 You can look through the sleeve to see her armpits!
What a wonderful sight! I think personally I prefer peeking inside here even more than looking under her skirt! :P 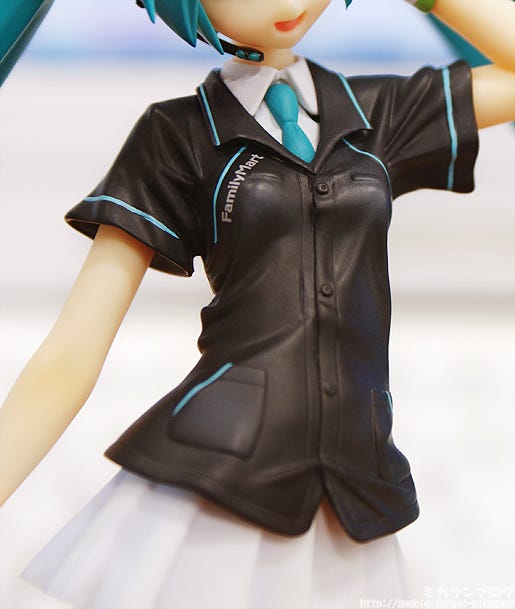 The lines and logo all look just like the real thing! The shirt and tie on the inside also look great! 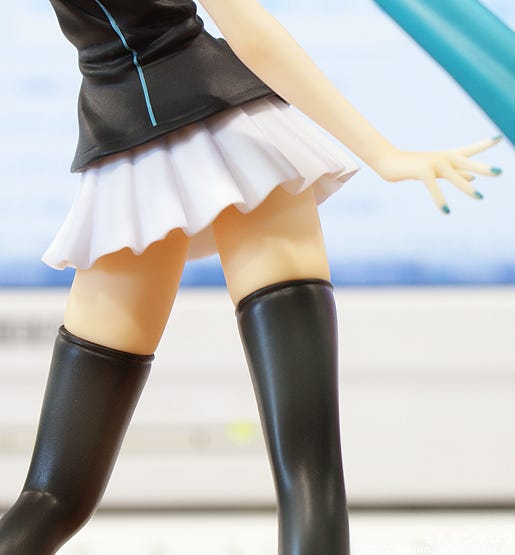 Her white skirt has such a fresh feeling!

The black top and white skirt contrast so nicely! It also has a nice summer-time feeling to it which suits Miku nicely! The normal Miku also normally has shiny futuristic boots, but Family Miku’s boots are matte coated instead – they look so smooth to the touch!

Her wristband is also FamilyMart colored!

Miku-san is such an angel!!

I wish I could look at her more, but I also want to take a look at this Miku!

This is a Nendoroid of Miku wearing the same FamilyMart uniform! She also comes with a couple of optional parts to play with! The standard pose is designed to look like Miku is welcoming you into the store – isn’t she adorable! 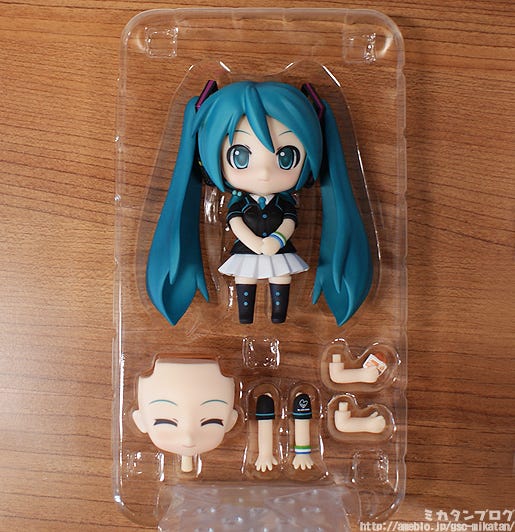 Slightly more simple than the standard Nendoroids, but she still comes with a small set of extras to enjoy, including some bent arms, straight arms and folded arms for a couple of different poses! 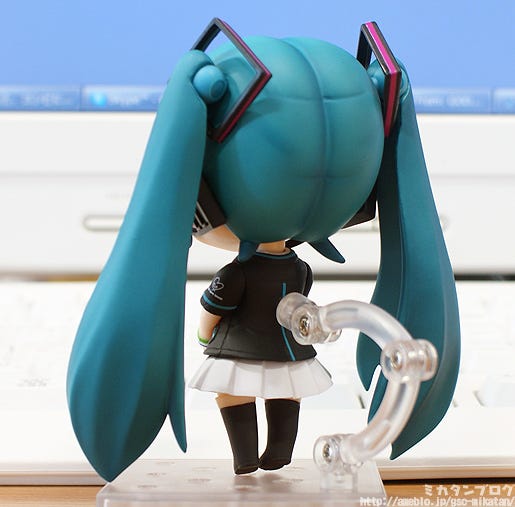 The little mark on her sleeve was taken from the actual data provided to us from FamilyMart! Even the small details like that have made their way onto the Nendoroid! 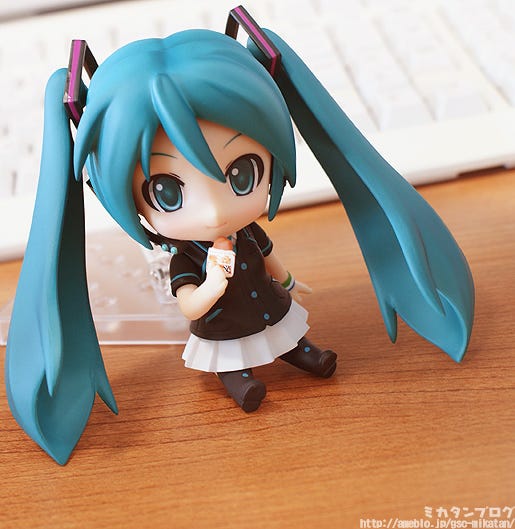 Everyone loves the Family Chicken that comes from FamilyMart, so it only suits that Miku should have some to enjoy as well! You can pose her eating it herself like this, or instead pose her handing it over to you – whichever you’d prefer! 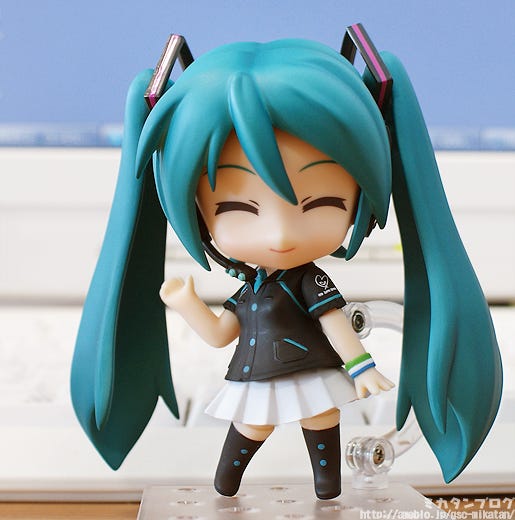 She also has a smiling expression!

“Please come through to the next register! ♪”
When I see her with this expression I can’t help but imagine she is saying something like that! The bent arm you see here and the arm holding the Family Chicken are separate parts entirely. 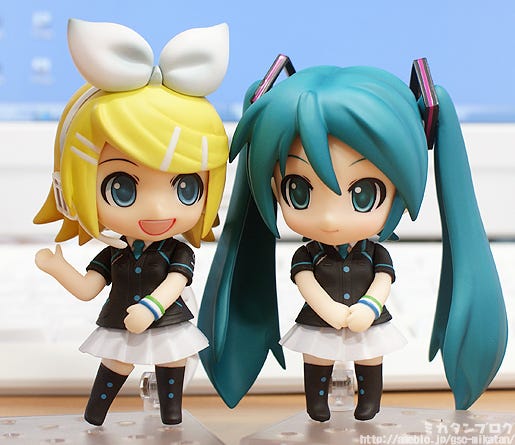 Other Nendos can try on the uniform!

I decided to have Rin-chan wear it, but I honestly think it will look quite nice on any characters! It’s just so adorable!! 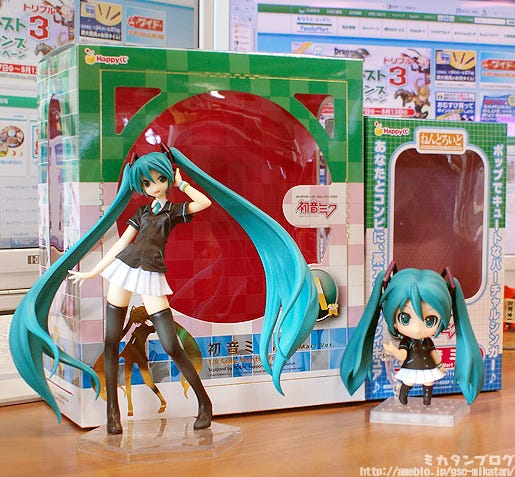 The dates will differ between some stores though, so be sure to confirm!

Finally I have an announcement to make – Good Smile will be taking a break between the 13th August and the 15th August, and the blog won’t be updated on the 16th either. The reason it’ll be down an extra day is that I’ll be away in Osaka so I won’t have the time to write an update!

So that’s all for this week, and I’ll only be seeing you on Friday next week!!