These are screenshots from the PSP game ‘Fate/Extra CCC’, which is scheduled to release on the 21st February 2013! The scenario is written by Kinoko Nasu, character designs are by Rco Wada! The game is set in the near future and the storyline is based in parallel world to the Fate series! 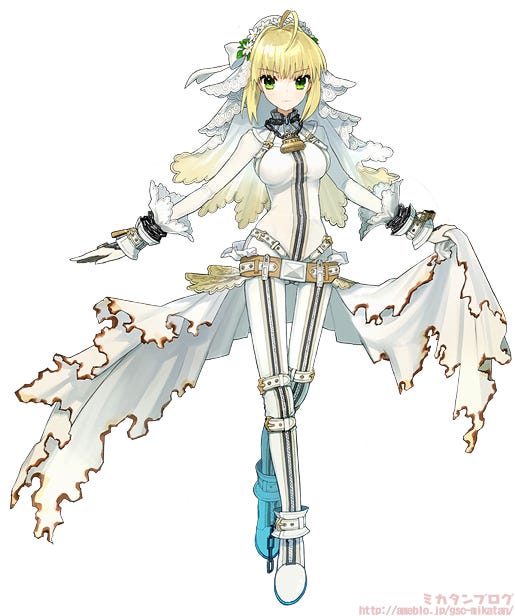 Saber in the game is wearing this tight wedding dress!

I’m sure a lot of you already know, but the limited edition of Fate/Extra CCC will also come with a figma of Saber wearing this lovely outfit! I want to see it!! 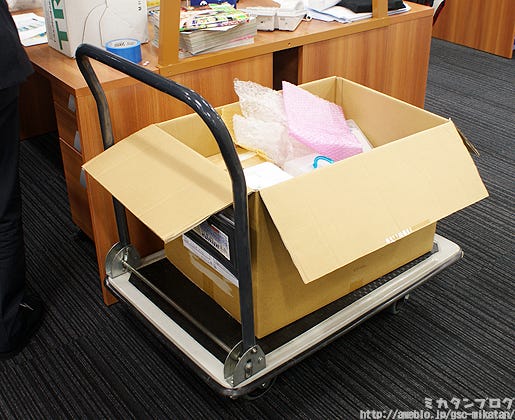 These must be the prototypes about to be sent off somewhere far again!

As I’ve mentioned a couple of times before on the blog, the 2012 Summer Wonder Festival prototypes are being displayed in locations around Japan from the 2nd August till the 16th August – they are going from Tokyo, to Nagoya, to Osaka and then to Fukuoka! They’re headed to Osaka from tomorrow – see the link below for more details! 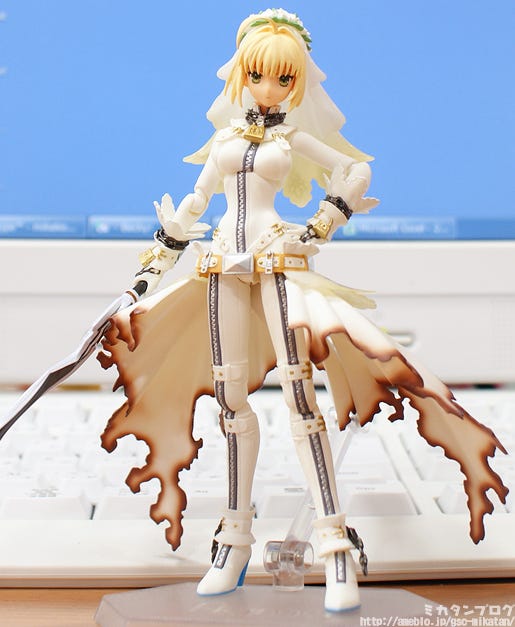 From the game set in 2032 where the fight for the Holy Grail is taking place in a cyber world, ‘Fate/Extra CCC’ comes a figma of Saber Bride! A brand new story filled with action and intrigue for Fate fans to enjoy!

figma Saber Bride is included with the Limited Edition! 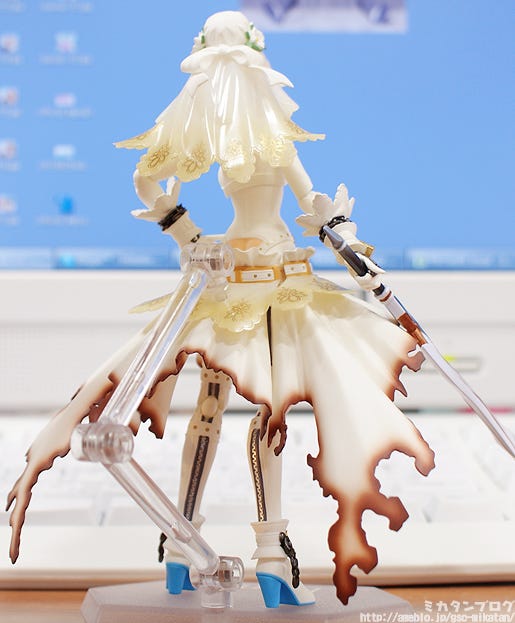 The pattern on the veil is beautiful, and the fasteners all over the outfit are so amazingly detailed – overall the sculpting is just outstanding for a figma! 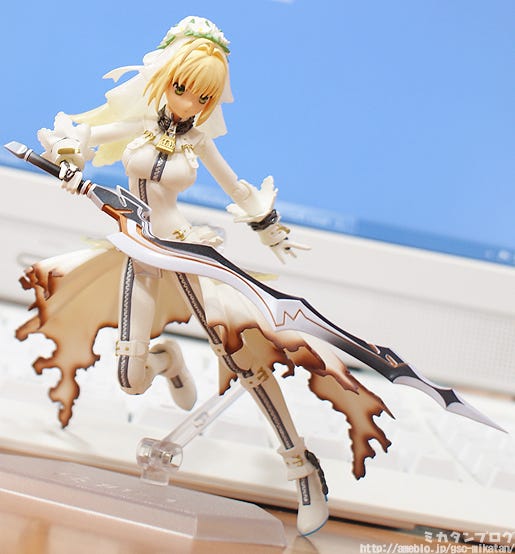 A sword is also included with the figma!

She comes with hand parts to hold the sword and swing it around like this, but she also comes with another hand part with her little finger in the air! That elegant pose will be perfect for the elegant outfit this version of Saber is wearing – she just needs a tea cup! 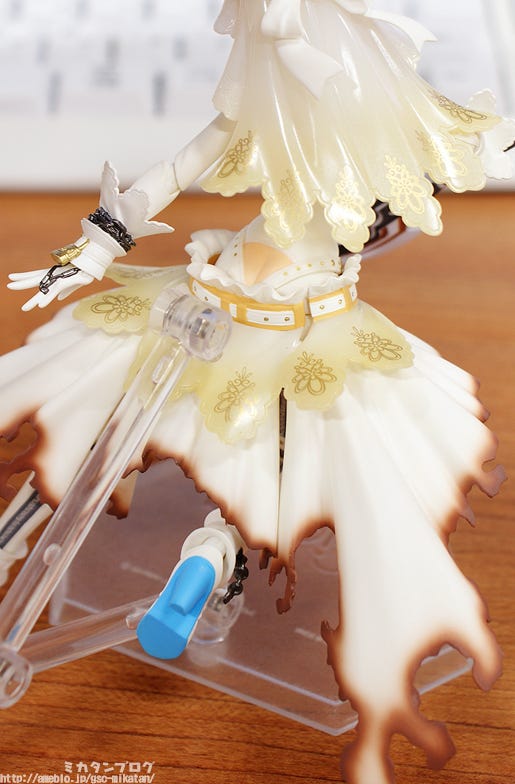 Definitely a rather risqué wedding dress, but that aside, the dress and veil both make use of some gradient clear parts! But there is so much more to enjoy as well – the detailed little pattern along the edges of the dress, the chains and locks hanging from the outfit and that little triangle of skin peeking through the outfit! 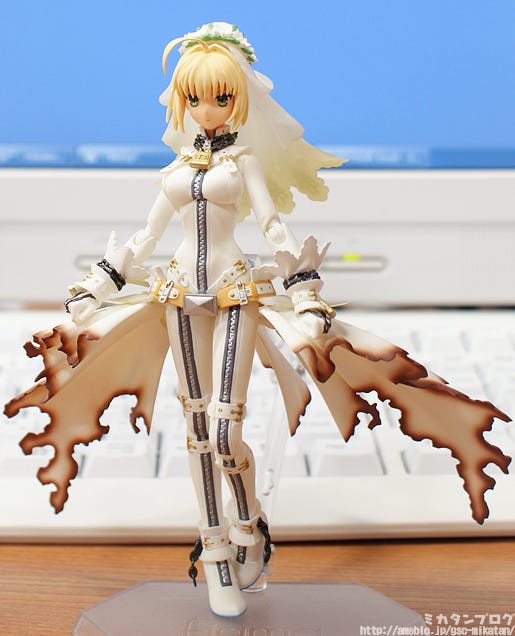 Even the dress features figma joints!

There are two joints in the back of the dress allowing you to move the entire skirt up like this! The burned effect at the edges of the skirt also looks very convincing! Great work once again from Max Factory’s painting team! 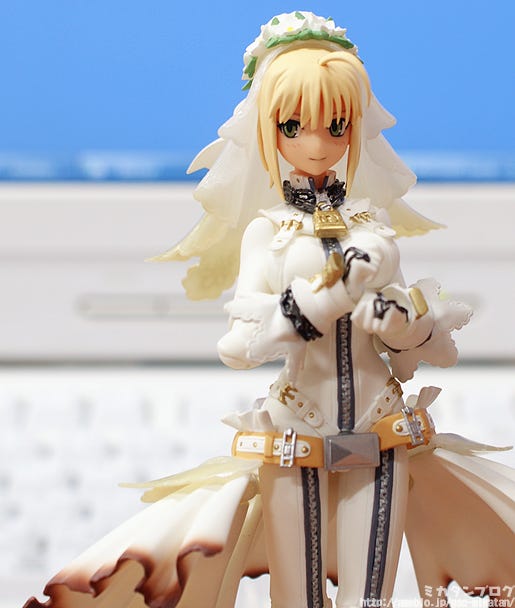 A fringe and expression to match Takashi’s illustration are also included!

Fate/stay night’s character designer, Takashi Takeuchi, also illustrated a version of Saber Bride that looked like this! Fans of the original Fate series might be more compelled to display her like this instead – but either way you get to choose which one you prefer!

The game is already available for preorder!
The figma will only be available as an extra to the limited edition of the game! If you have any preorder or sales queries, you can check with out partner shops or any gaming shops that are likely to stock the PSP game!
But anyway, that’s all for today!
I hope to see you all again tomorrow!! (・∀・)ノ゛