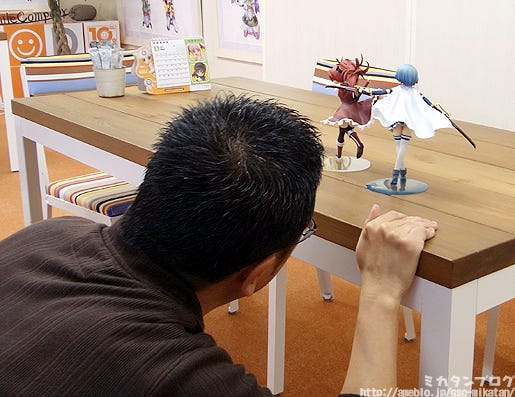 Looking under their skirts…!?

GRIMROCK!’s sculptor Ken Kawanishi came to visit us here in Matsudo! He’s taking a look at the recently released Sayaka-chan sample together with another lovely figure…! (`･ω･´)ゞ 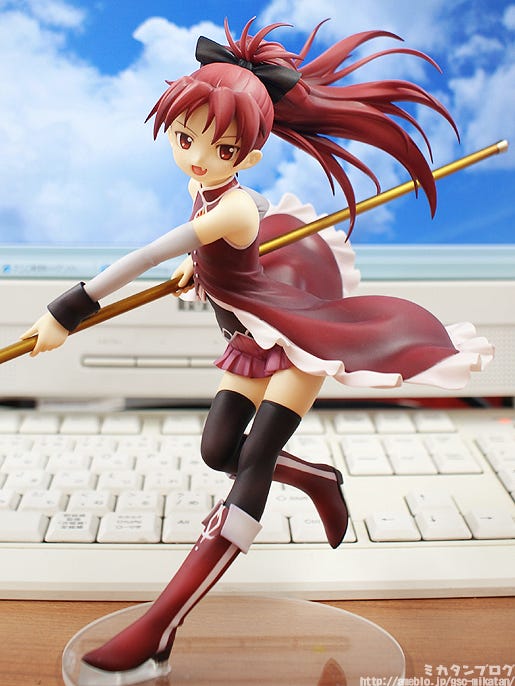 The 5th in the Madoka Magica 1/8th scale figure series:

From the anime series that received a number of awards in 2011, ‘Puella Magi Madoka Magica’ comes a 1/8th scale figure in a lovely dynamic pose of the Puella Magi with a long red ponytail – Kyouko Sakura!

Following on from the previously released Madoka Kaname, Homura Akemi, Mami Tomoe and Sayaka Miki – Kyouko is here to complete the famous key visual that all the poses are based on! Plus afterwards we also have Ultimate Madoka coming up as well! 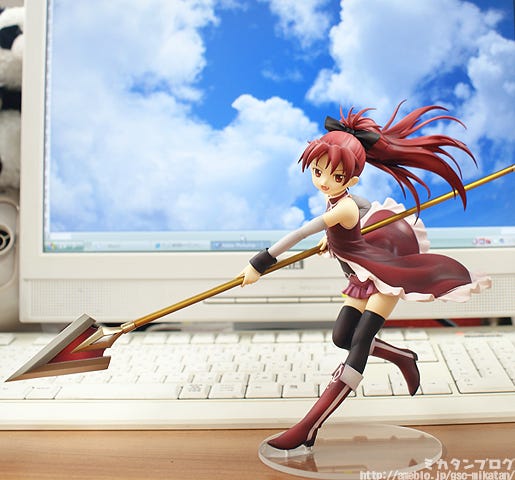 A dynamic pose holding her spear!

It’s huge!! ((((;ﾟДﾟ))))
Trying to get the entire spear into the photo was quite a task – it’s almost as long as the monitor!! I love the look of adorable characters like Kyouko with huge weapons like this!

For those who are worried about the spear being too long and taking up too much space – don’t worry! There are some replaceable parts that’ll remove that problem that we’ll take a look at later! 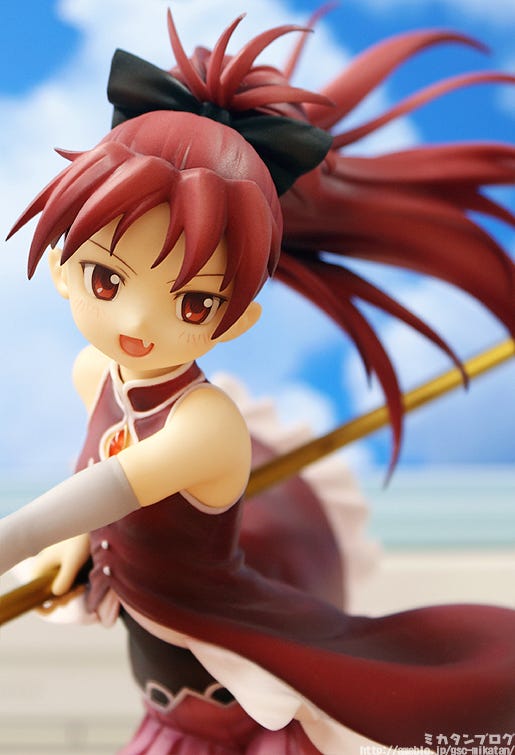 It just wouldn’t be Kyouko without that adorable little tooth!! You can see it nice and clearly on the 1/8th scale figure – just looking at that smile makes me feel all warm and happy inside. (*´ω`*) 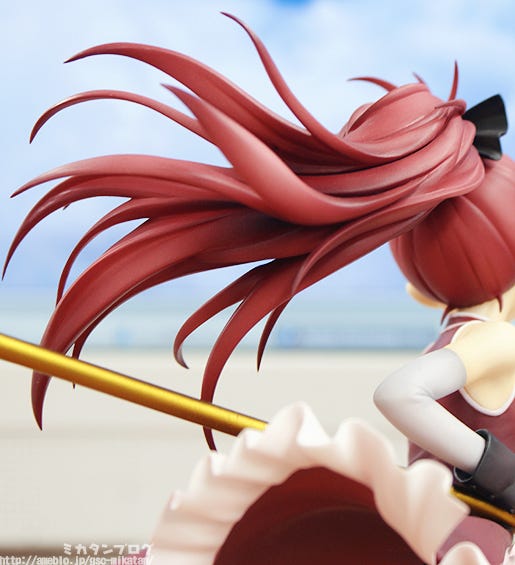 Look at that lovely ponytail!

The hair is flowing behind her and really compliments the dynamic pose – each and every strand is so detailed! You really need to look at it from a variety of angles to really appreciate how lovely it looks! 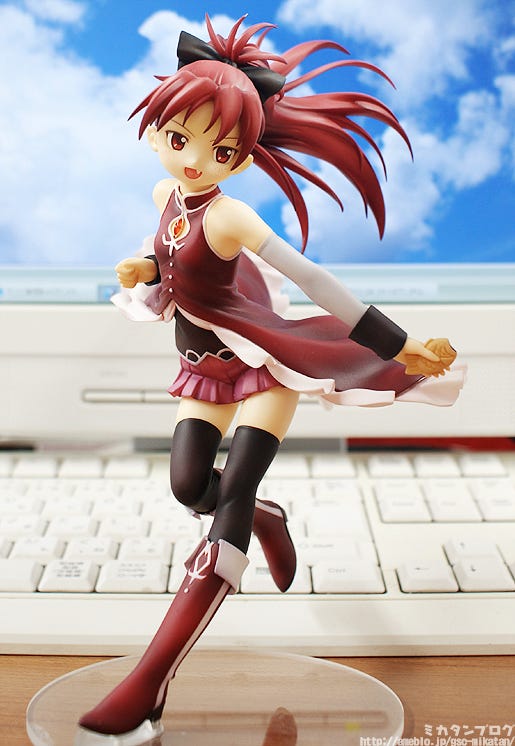 Here we have the replaceable parts!

Instead of holding the spear you can instead display her holding her favorite taiyaki as well!

Plus these hand parts have her hand much further backward when compared to the pose with the spear, creating a considerably different feeling to the figure – nice for a change once in a while! 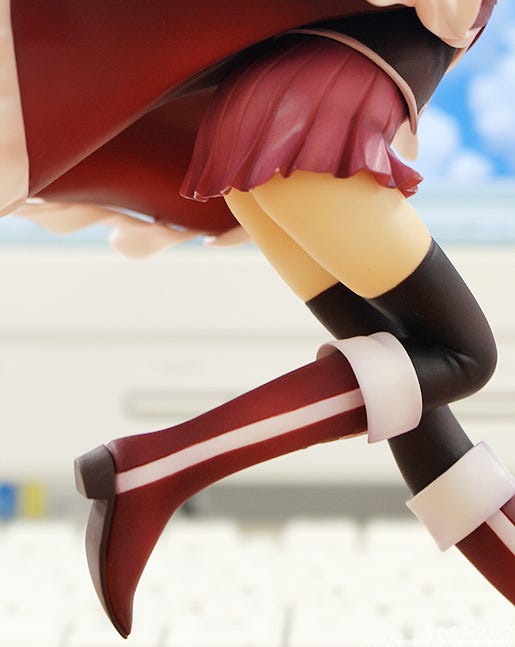 Everything is so detailed! 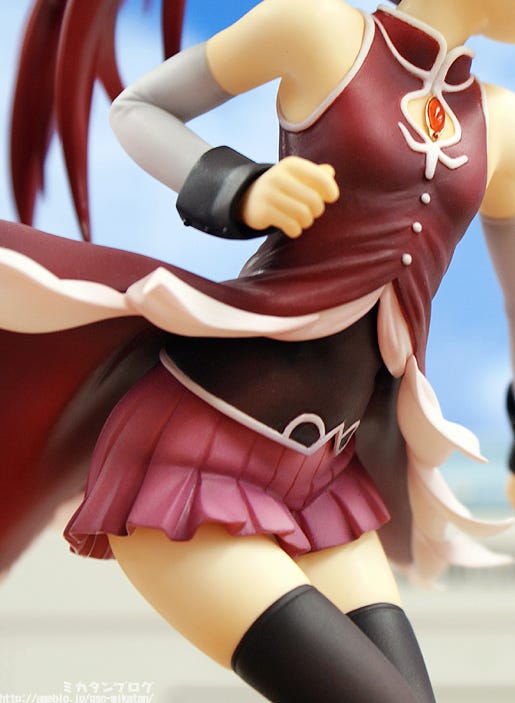 She has a lovely body-line!

Her lovely ladylike upper body is complimented brilliantly by these thighs that look so very squishy!! I almost can’t resist trying to touch them to see if they feel as soft as they look! 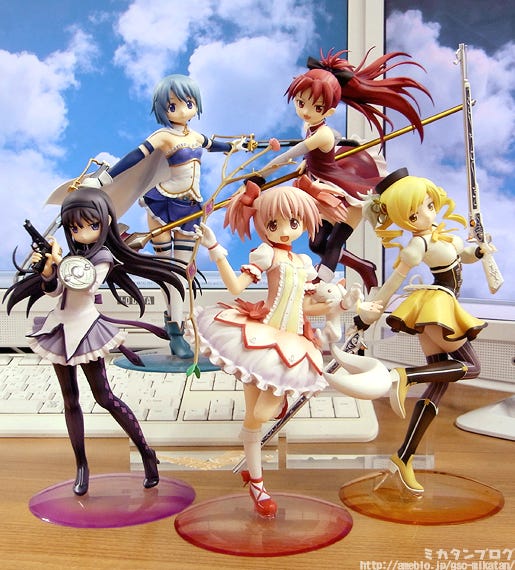 Here we have the complete 1/8th scale series together recreating the famous key visual! Having Kyouko really brings the collection together beautifully!

This pose does differ slightly from the original illustration as they are all holding their weapons! 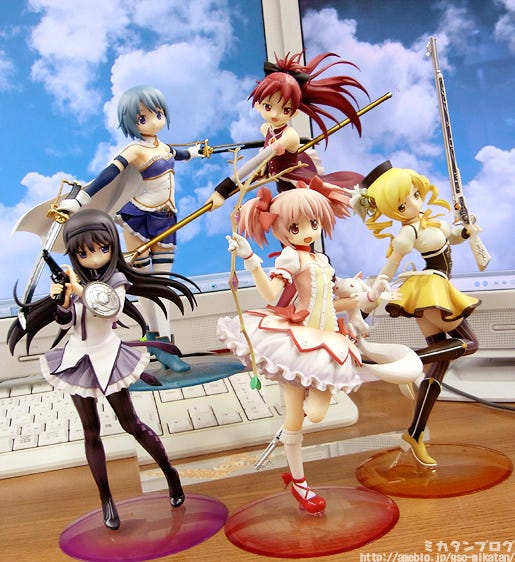 I absolutely love seeing all of them together like this, so I had to take another picture! I have the two in the back lifted up slightly higher to create this look, but you could also of course just display them all together in a line!

The 5th in the Madoka Magica 1/8th scale figure series:

She’ll be on the GSC site from tomorrow! (`･ω･´)ゞ
If you have any preorder or sales queries, be sure to contact our partner shops!
But that’s all for today!
I hope to see you all again tomorrow!! (・∀・)ノ゛