Last week Friday was a live broadcast day!
A big thanks to everyone who tuned in!! 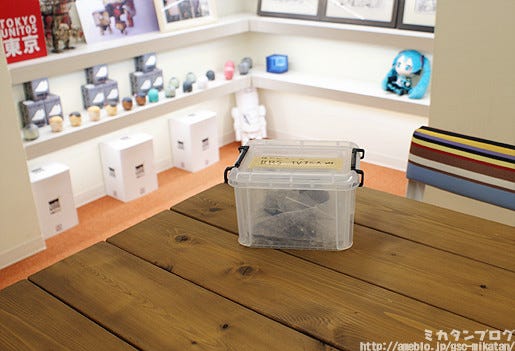 We got hold of quite a few prototypes for the broadcast!

One of which was the figure I’ll be taking a look at today! 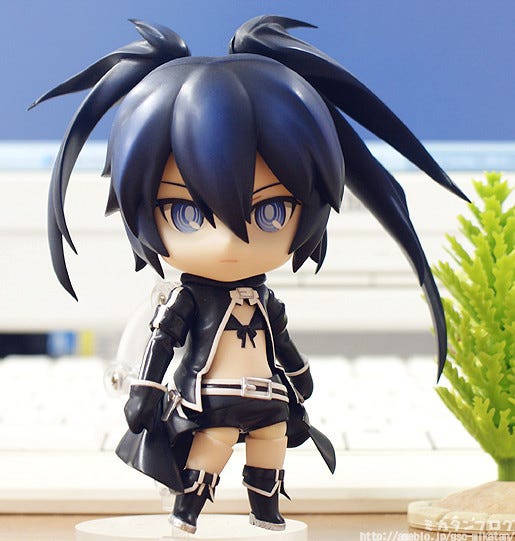 She is from the recent TV anime series of Black Rock Shooter – the Mato of the alternate world! She features a brand new design that was used in the new anime series – the figure was sculpted up from scratch, so it’s very different to the previous BRS Nendoroid! 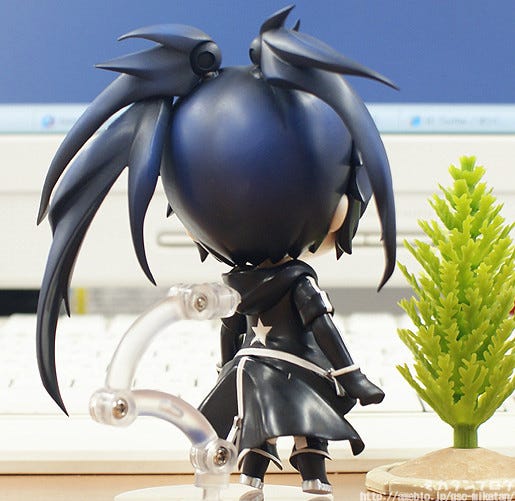 Even her coat is fitted with ball joints, so you can create really dynamic poses with the coat flowing in the right direction! The silver coloring on the zipper and soles of her boots really contrasts nicely with her blakc outfit – it’s always those small details that really make a figure stand out from the rest! 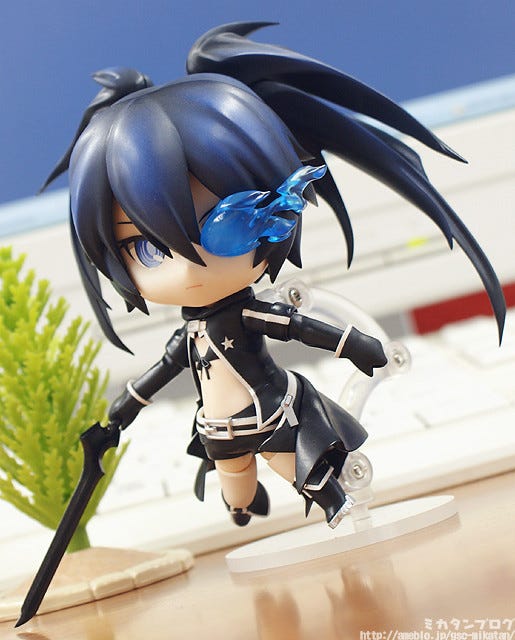 A flaming eye and the Black Blade!

The sculptor behind her was Manabu Katou, who worked really hard on getting the flame to look perfect – it looks as if the wind is blowing it to the side! Great job!

Together with the Black Blade in her right hand, she looks ready for battle! 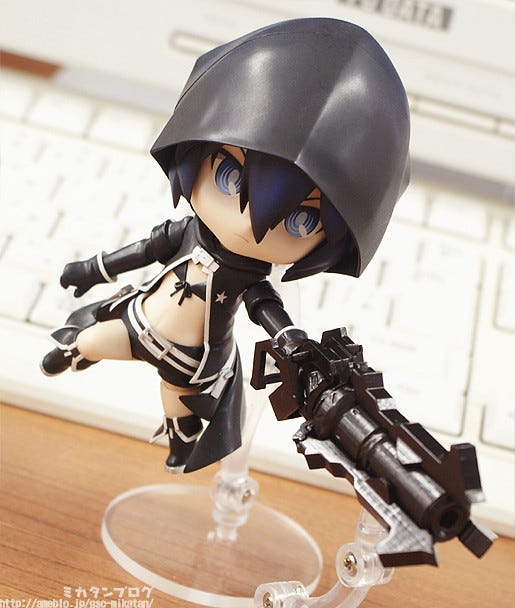 Her hood and the Rock Cannon!

Those who have seen the anime will definitely remember the scene where BRS-chan is wearing her hood! The hood splits in half at the top – you simply need to place the expression you want in-between the two parts.

The new version of the Rock Cannon is sculpted using 3D data. The detail on the cannon is really outstanding… let’s take a closer look! 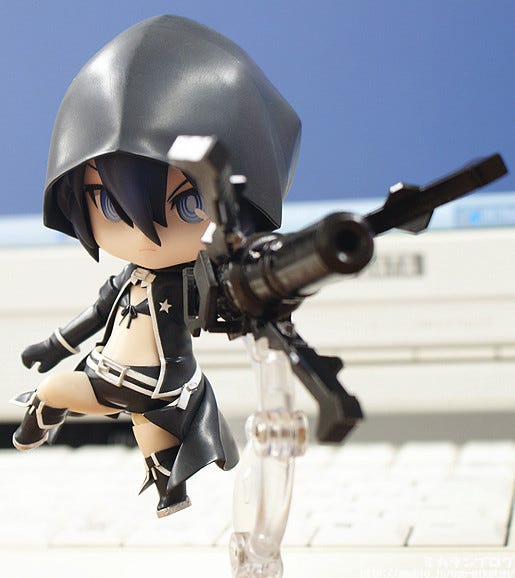 The Rock Cannon can even deploy!

As we showed on the live broadcast, the Rock Cannon opens up exactly like it did in the series! The base of the cannon is also made poseable to allow it to deploy as accurately as possible!

Although… it does feature incredibly small parts, so I’m not entirely certain that it will come out exactly the same after mass production… 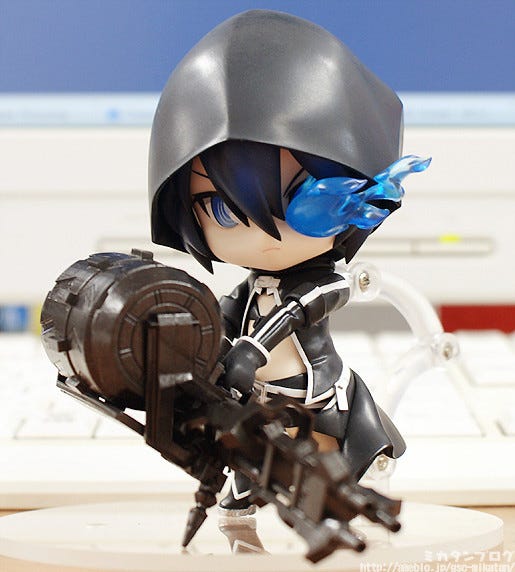 The Gatling Gun is also included!

Two giant weapons with a single Nendoroid, along with hood parts and a sword! So many things to play around with! Yay!!

You can even attach the blue flame while she is wearing the hood! 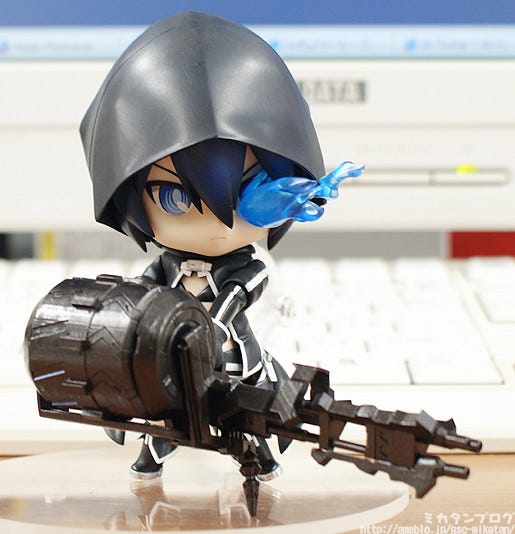 A side-view of the Gatling Gun!

Unfortunately I didn’t have time to throw some macarons around her to recreate the scene from the series. ^^

If you ever try it for yourself, I’d love to see it! But don’t let the food go to waste afterwards! I really want to create a frame animation using the Nendoroid of the scene where she shoots the Gatling Gun… it would probably take hours though…

She’ll be up for preorder around Friday! (`･ω･´)ゞ
If you have any preorder or sales queries, be sure to get in contact with our partner shops!

– 10 Years of Good Smile Company : Nendoroids of the Past! –

There are only 6 days left until GSC turns 11 years old!

Let’s take a look at another Nendoroid of the Past! 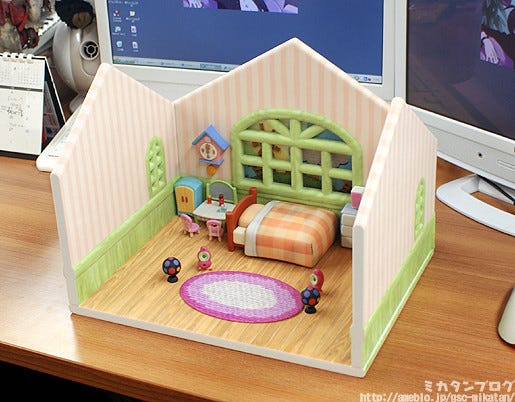 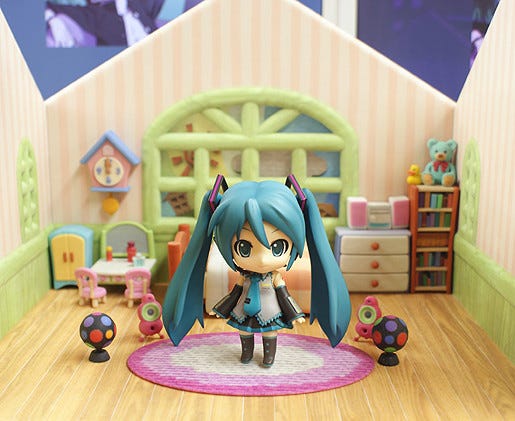 Miku is easily one the most popular Nendoroids ever, having had a total of five resales, and even a Cheerful! release after that! She has been sent all over the world for fans to enjoy! 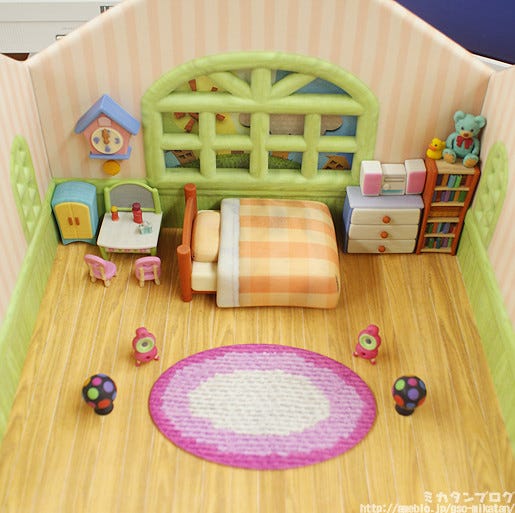 You might be wondering about this diorama set…
It’s a set of the opening from the Project mirai game!

We also saw it briefly on the ‘Let’s play Project mirai’ live broadcast, but now that it has had some final adjustments I’m able to show it off to everyone reading the blog! Yay! 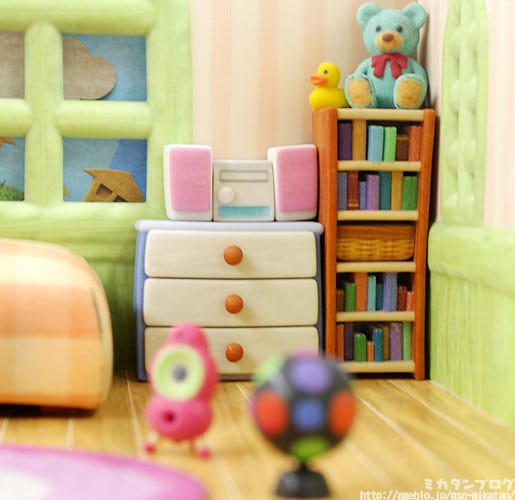 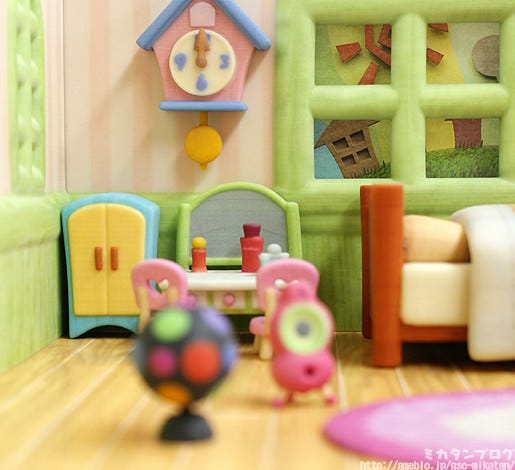 The little trinkets are absolutely lovely! 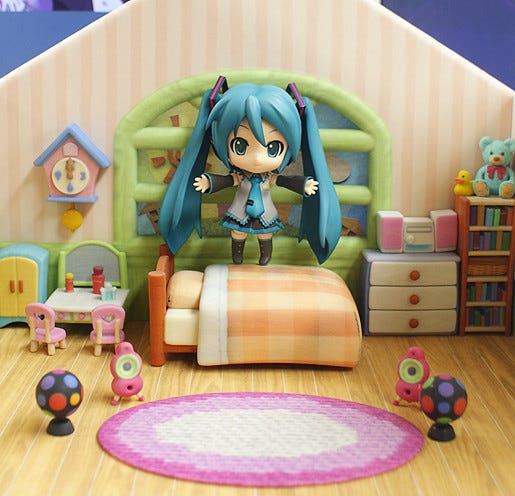 The perfect size for Nendoroid Miku!

I’m sure I’m not the only one thinking this… but unfortunately there are no current plans for a product version of this…
But it will be on display at the Akihabara GSC Cafe!
It’s really cute, so do take a look if you stop by the cafe! 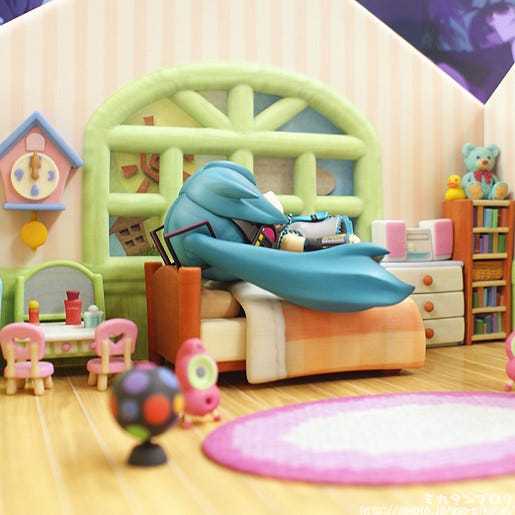