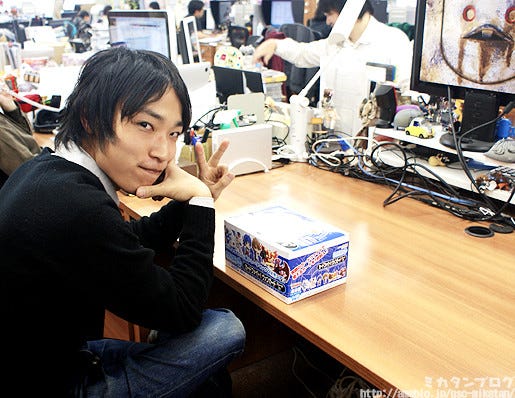 Tori Bird striking a classy pose for the camera! (`･ω･´)

He really looks to be very cheerful in this picture, which is understandable since the figures he worked so hard on are nearly ready to ship out to stores! Samples arrived here at Good Smile, so I’ll be taking a quick look at them! 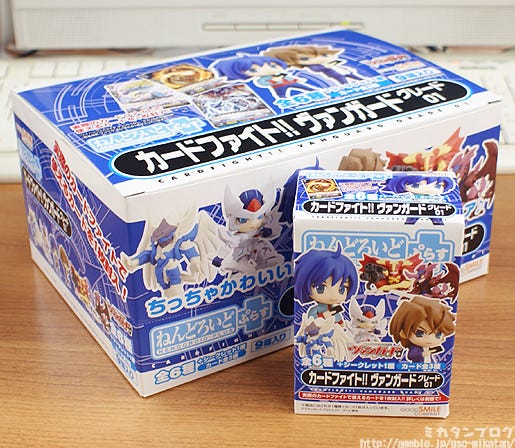 From the popular anime series, ‘Cardfight!! Vanguard” comes a set of miniature figures of characters and units from the series! Each figure also comes with one of three possible random Vanguard! cards – either “Wyvern Strike Gyuntor”, “Mithril Summoning Arts” or “Dark Dragon Monk, Makoraga”.

An incredible price for both a figure and a Vanguard card!

One big box like the one above contains 9 small boxes!
Each small box contains a random character – you can’t tell what is inside. You just have to wait and see who you get!

Today I’ll be opening the boxes one-by-one until I have each of the figures to show on the blog! I’m looking forward to opening up Aichi and the Wyvern Strike Gyuntor card! 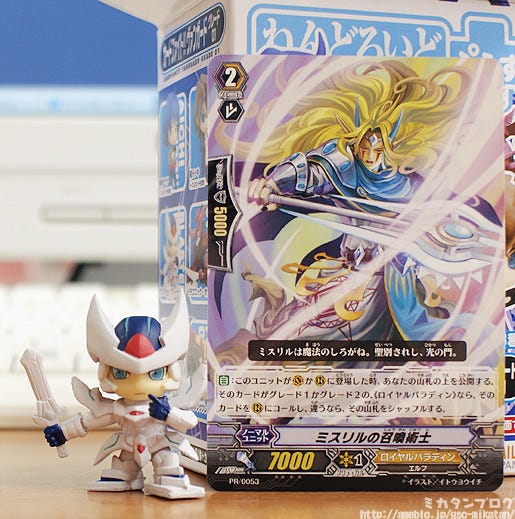 First up is Blaster Blade!

The figures are very small, but by no means does that make them poor quality! For just 300 yen you get an incredibly detailed miniature figure! For those unsure of just how small they are… 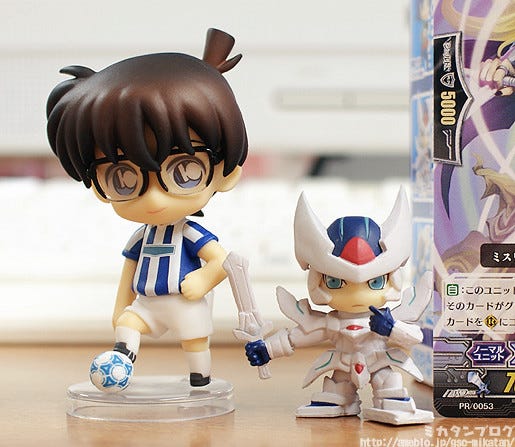 Size comparison with a Nendo Petite!

I’ll be introducing this Conan at the end of the blog as well… but for now we’ll just use him as a size comparison! :P 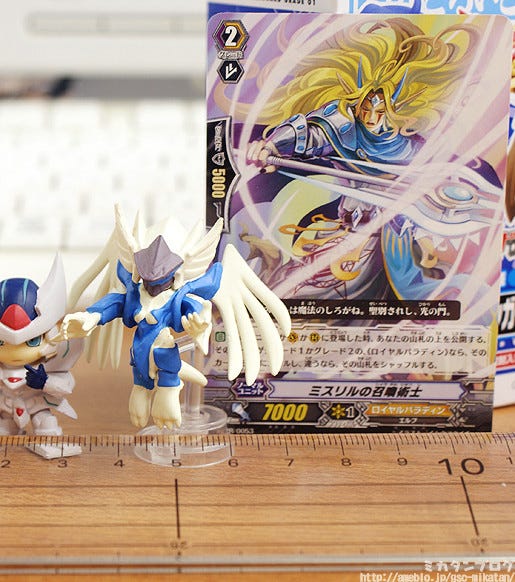 Next up is Soul Saber Dragon!

The card is once again, ‘Mithril Summoning Arts’!

For those who have never seen a Nendoroid Petite and need a separate size comparison, I placed a ruler in the front of this photo to give you a better idea. The body of the Soul Saber Dragon is about 1cm long!! 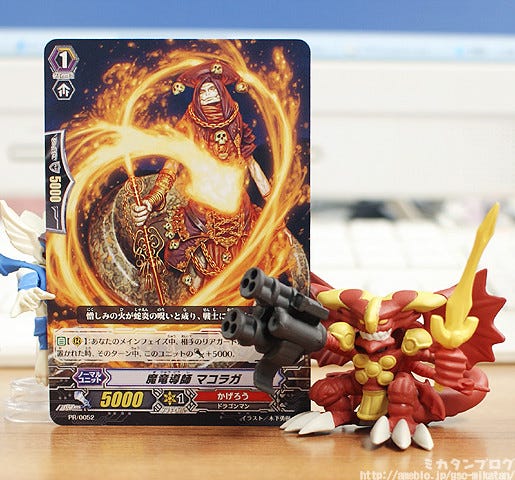 That Gatling gun is really impressive! So intricate even though it is so tiny! Although for some reason it seems the Aichi figure I wanted just isn’t popping up… 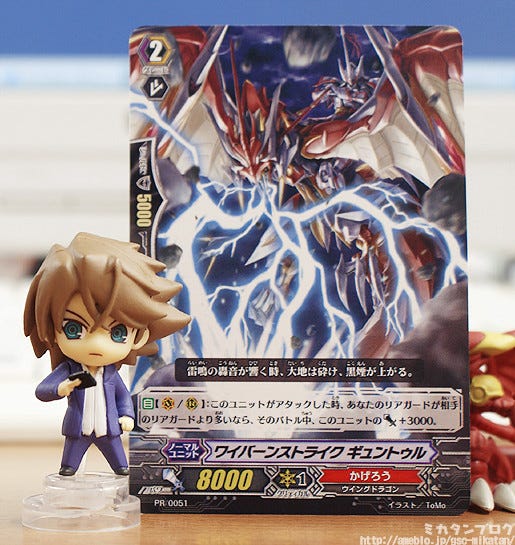 The forth is Toshiki Kai!

Finally the card I was looking for!! I’m not actually a cardfighter myself, but I just really like the sound of the name ‘Gyuntor’, and the lightning attacks he uses! Pika!! 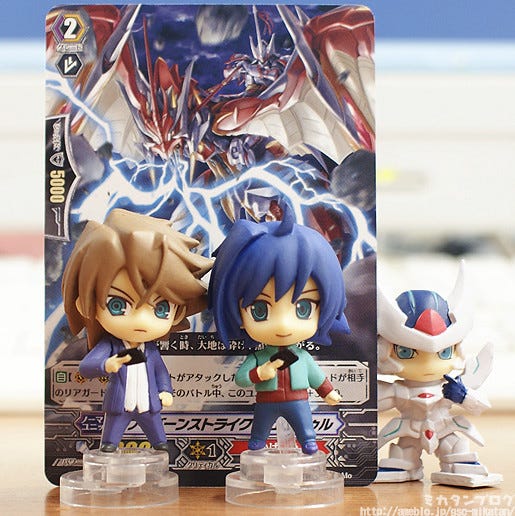 The fifth is… Aichi Sendou!

He also came with the ‘Wyvern Strike Gyuntor’ card!

I know there are a lot of female readers of this blog, (I think almost half the people who call out to me at events are girls!) and I know lots of them were very happy to see the prototype review of these figures! 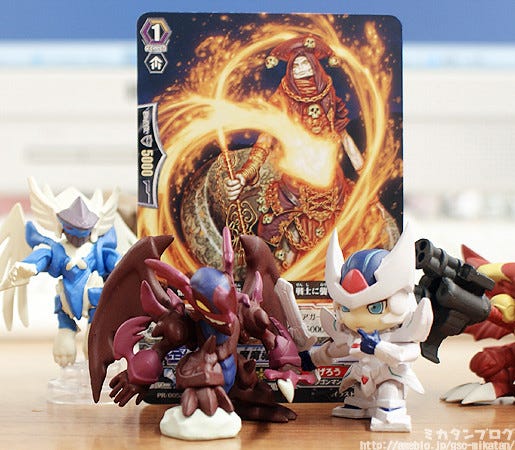 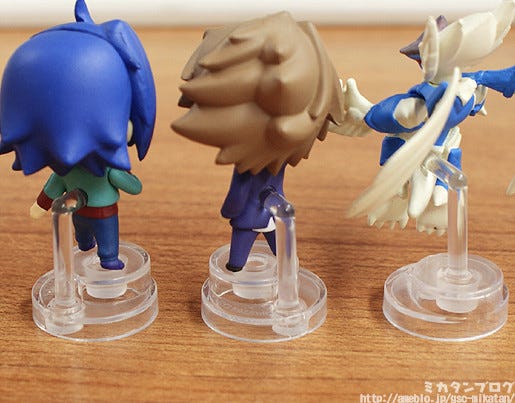 This is how the stands look! 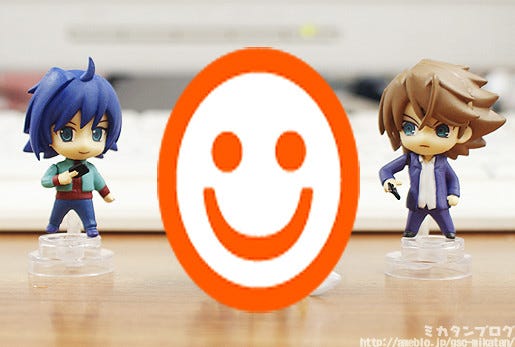 There is also a secret character!

Along with the six figures I just introduced… there is also one secret character to look forward to! Lots of readers have specifically requested that I don’t show the secret figures, so this time around I’ve hidden it from view!! Just look forward to finding out for yourself! 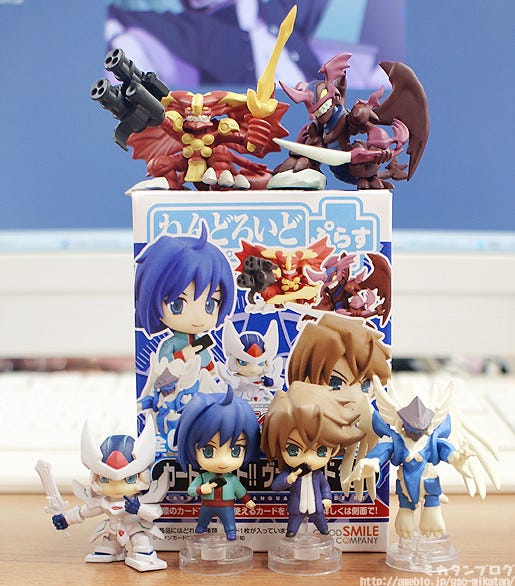 They will be on sale at Circle K Sunkus stores and our partner shops from the 24th April!

If you have any sales queries, be sure to get in contact with them! 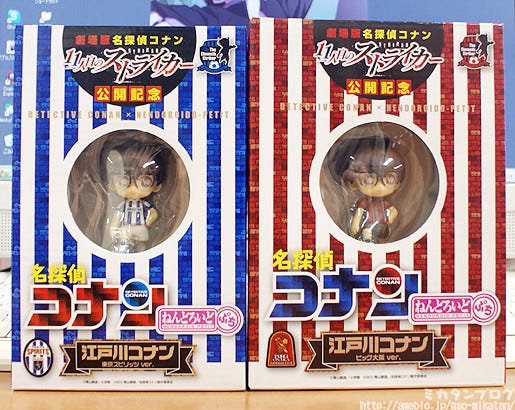 Plus, heading back to the character who made a guest appearance earlier…

In commemoration of the release of the most recent Conan film, “Detective Conan and the 11th Striker”, two different kinds of Nendoroid Petite Conan figures will be available around the 14th April. I never thought I’d see the day when a legend like Conan would join the Nendoroid world! 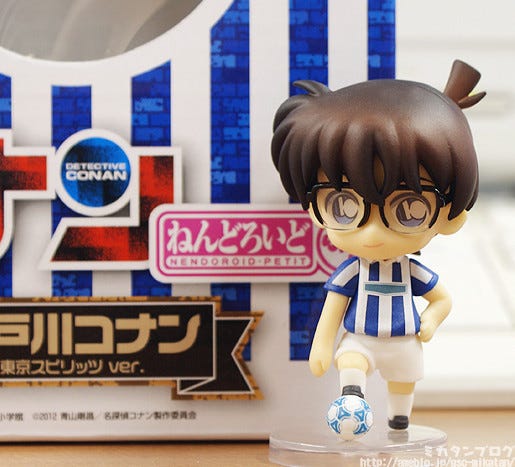 The Conan manga has finally reached it’s 75th volume, and this version of the Nendoroid Petite in a Tokyo Spirits uniform will be included with the special edition of it! The blue stripes are a simple, but lovely design! The soccer ball is also very accurately sculpted! 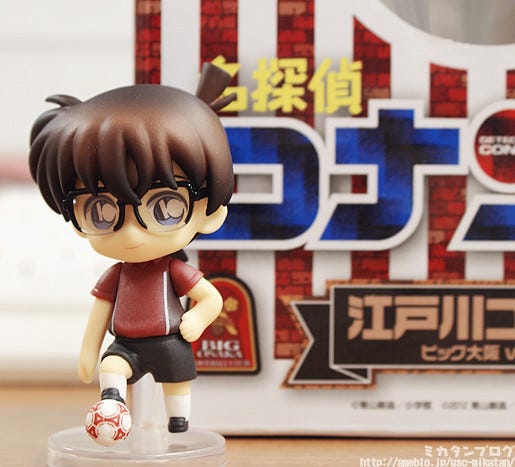 The special edition manga focusing on a collection of Conan soccer stories, ‘Detective Conan Soccer Collection’ will come with this Big Osaka version of the Conan Nendoroid Petite!

This will be sold exclusively at Seven Eleven!!

Both of them look really cute, I think it would be well worth it for Conan fans to grab them both and display them together!