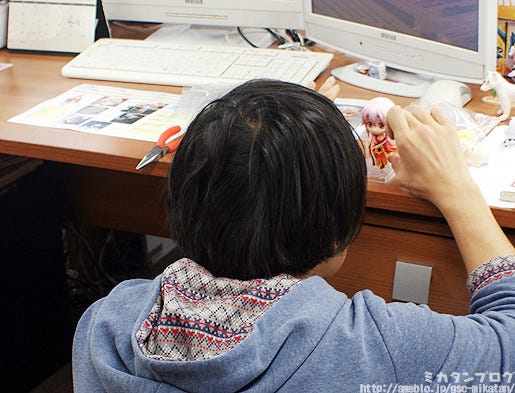 Normally I end up stealing the prototype from somewhere and putting it together myself, but this time around Shuu-chan from the planning department came by to do it for me!

So today I’ll be playing with this lovely figure… although she seems a bit fragile, so I’m going to have to be super careful!

The sculpting and painting is really incredible! 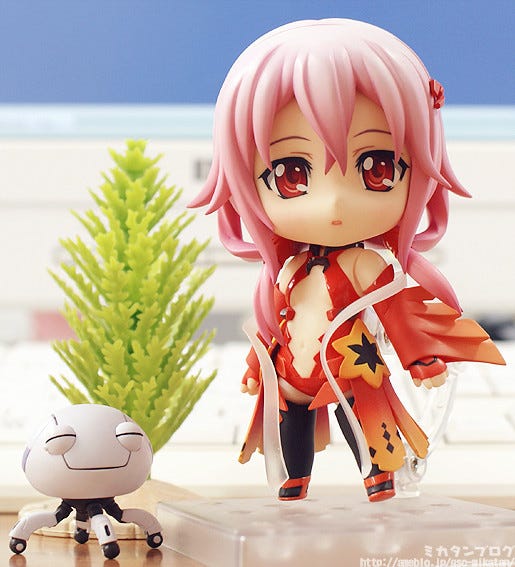 From the Fuji TV noitaminA block series, ‘Guilty Crown’ comes a figure of the Undertaker’s member, singer and heroine of the series, Inori Yuzuriha! She is posed wearing the lovely red and orange outfit from the series!

Plus Fyu-Neru, the little robotic helper is also included!
He has a whole bunch of fun gimmicks, which I’ll introduce later!! 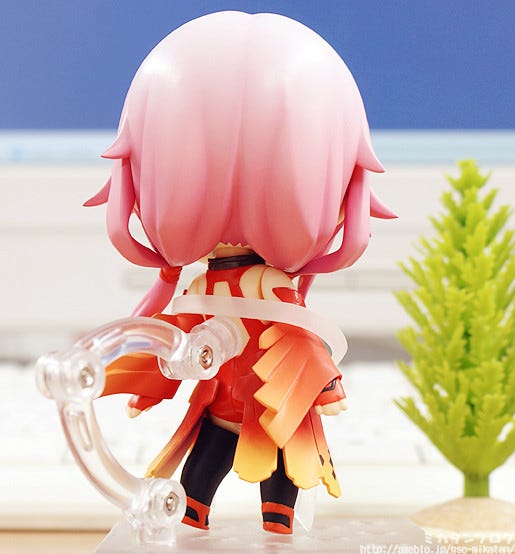 There is so much lovely gradient paint work on her!! Just look at her beautiful pink hair… and that outfit is my personal favorite highlight. The red to orange gradient is simply a work of art!

Plus the hips have stamp painting done on them!! So much fine little detail!! 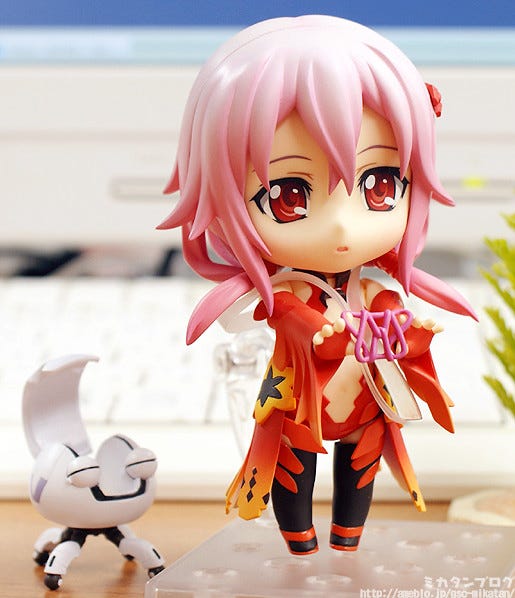 The shoulder and sleeve are separate parts allowing you to switch the shoulders out and place her arms out in front of her like this. You can then make use of the string parrts and special hand parts to recreate this scene that will leave a deep impression on anyone who has watched the series!

Not to mention… that expression is to die for!
Gazing innocently ahead with her cute little mouth open!!! ･ﾟ･（ﾉД`）･ﾟ･｡ 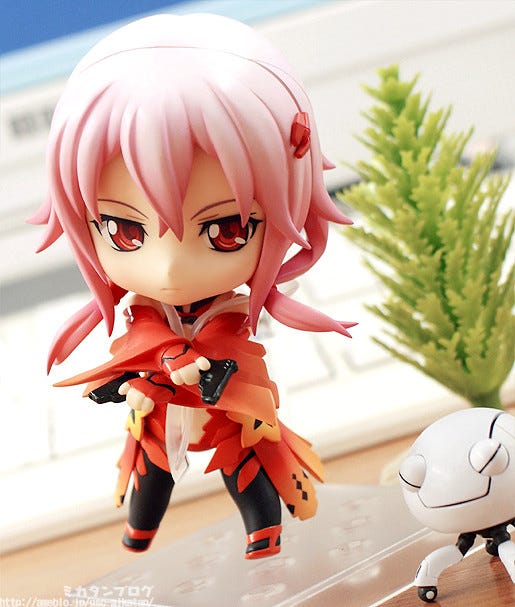 Now it looks like Inori is ready to fight! She comes with extra parts that let her pose her with her arms crossed like this while holding her guns.

These arm parts are connected at the shoulder and all together make up a single piece. (In other words, the sleeves and shoulder won’t be detachable on these parts… unless something changes during production!)

The difference between her cute self and this pose is incredible!! 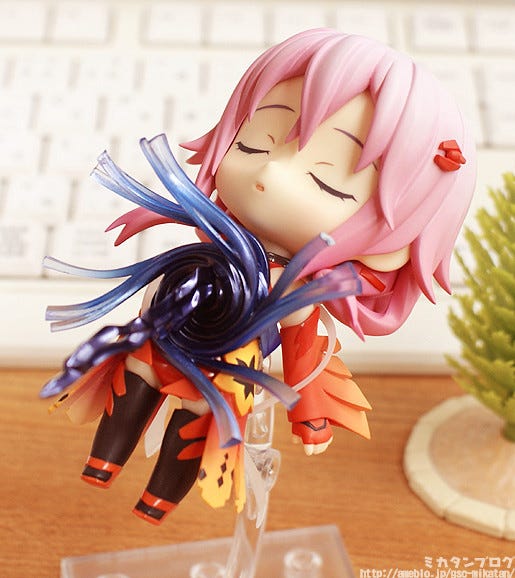 I actually really like these effect parts, although the one problem about effect parts is that they often look a little bit too 2D on the figure… 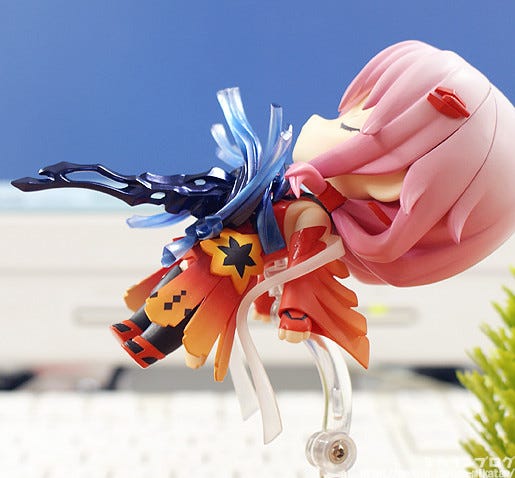 It also looks great from the side!

No matter what the angle, she still looks absolutely outstanding! The effect parts are inserted into her body in order to create this pose.

To add a little more info to the parts…

・ The effect parts have a lovely clear gradient!
・ The parts are sculpted as if the void was being pulled out from her!

They are incredibly detailed for extra parts!! 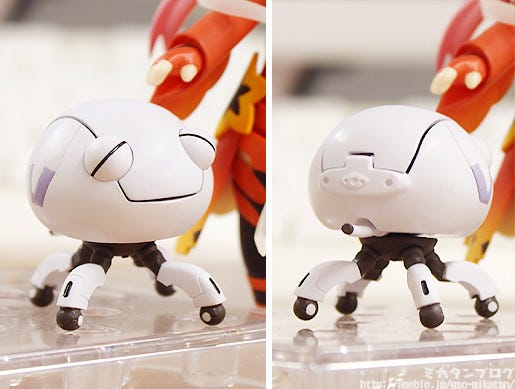 This is how it looks from the back! We took a look at him during the WonHobby live broadcast as well, where we saw that it was sculpted using 3D data – very intricate 3D data!

The eyes can rotate around for different expressions!! 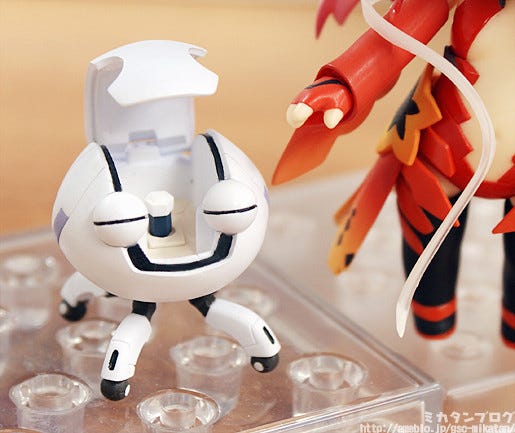 The front cover opens up!

Inside you can see a capsule! It’s just too much! You can make it look angry, happy or exhausted just with those eyes, and then still choose to display it opened up or leave it closed. There are so many options!

She’ll be on the GSC website from tomorrow!!  (`･ω･´)ゞ
If you have any preorder or sales queries, be sure to get in contact with our partner shops!