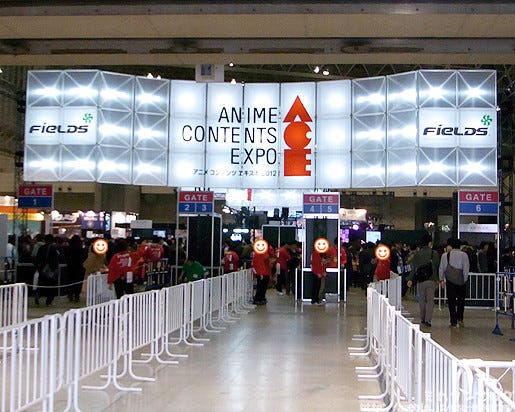 The strong winds on Saturday were causing havoc with the public transport, I hope everyone who visited the event didn’t have too much trouble. I was sitting in the offices silently doing some work. ^^

But on Sunday I went to the Anime Contents Expo, also known as ACE!! (`･ω･´)ゞ

The event was held in Chiba at the Makuhari Messe. GSC had a booth up as well! 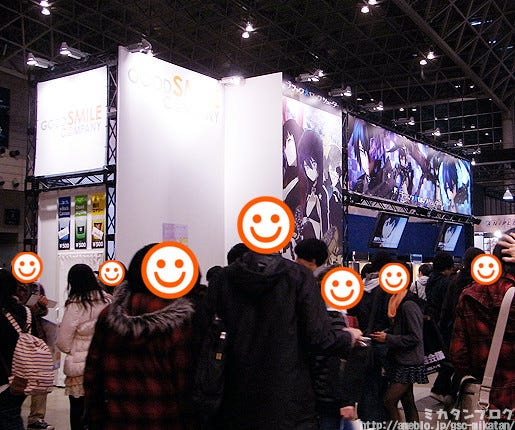 Arrival at the GSC Booth!

There were a load of people at the event…!! It felt considerably busier than the Tokyo Anime Fair that was held the previous weekend. There was also a ton of cosplay which I was happy to see. (I remember screeching in happiness when I saw a Ririchiyo-sama cosplayer!) 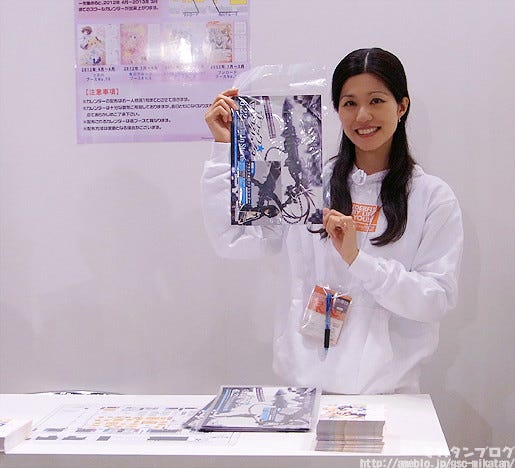 These were given out to everyone!

A Black Rock Shooter flyer, as well as the same Insane Set that was given out at TAF. I hope you all enjoyed the free goodies! 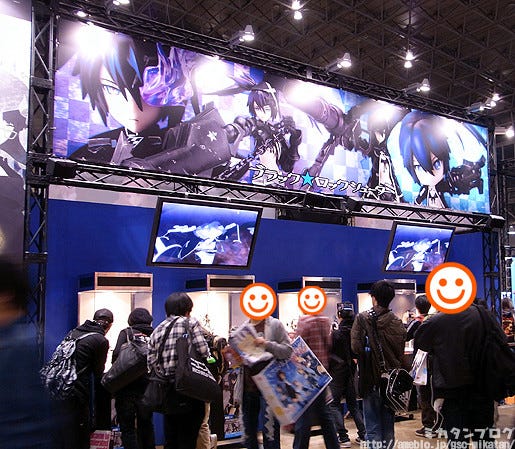 First up is the BRS Corner!

This was the biggest corner at both TAF and ACE, and always had a stream of people flowing through! There were also a lot of folks who just stood and watched the monitors with great interest. 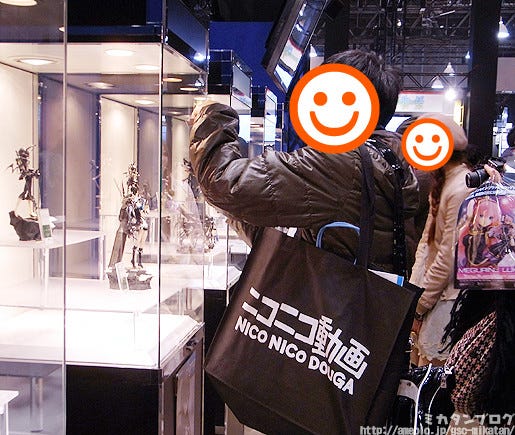 The majority of the photographers were very young looking, and lots of them were just taking photos with their phones rather than actual cameras. I’m so glad to see people so very interested in the figure and Black Rock Shooter world! 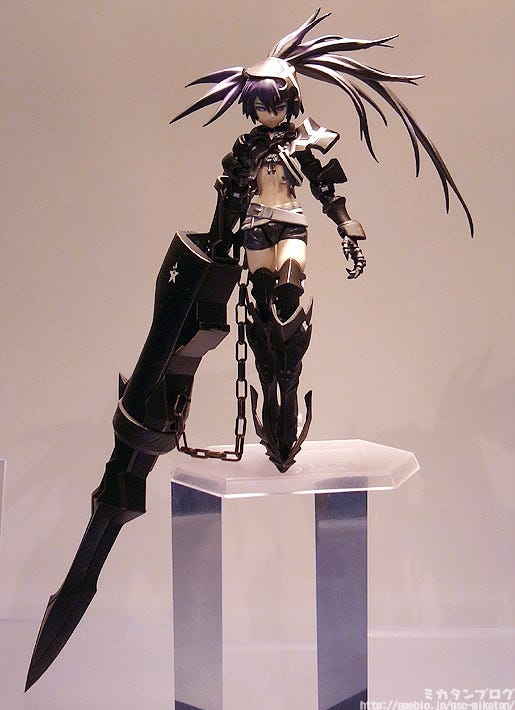 Insane-chan was also on display!

As I’ve said before… that weapon is just way too big, but that’s what makes it so incredible!! The figure was probably the one that attracted the most attention at the event… probably due to the recently concluded anime series. 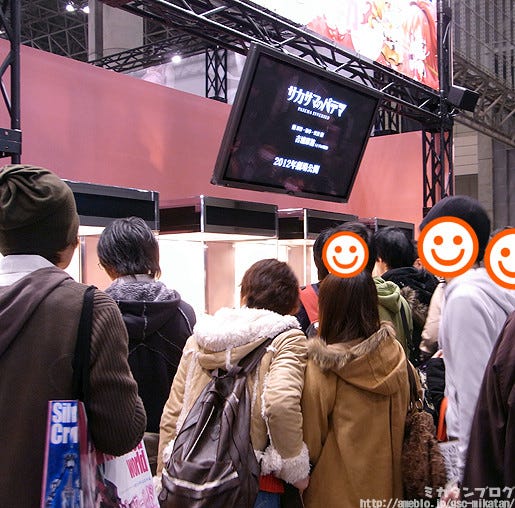 Next is the Madoka Magica Corner!

The entire event saw a wall of customers in front of the glass cases here… it was almost impossible to get to the front!! :P With a movie on the way, the Madoka series is still set to be popular for some time! 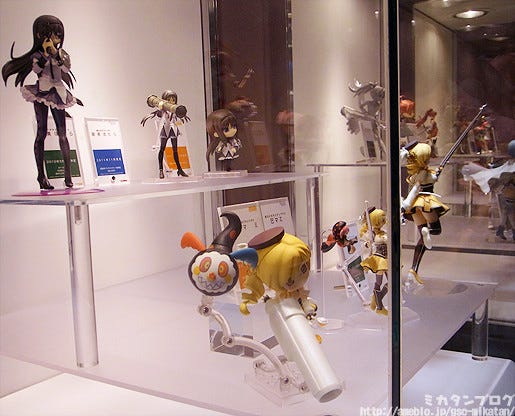 This is how the display looked!

S-Sorry about the angle… I didn’t want to get in the way of any of the customers that had been waiting so long to see the display cases. There were all sorts of scale figures, figmas and Nendoroids on display for everyone to enjoy! 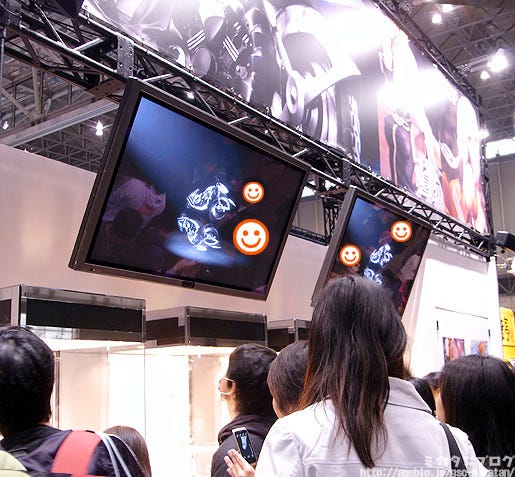 The next booth had the latest figures on display!

Let’s take a look at what is coming up…. 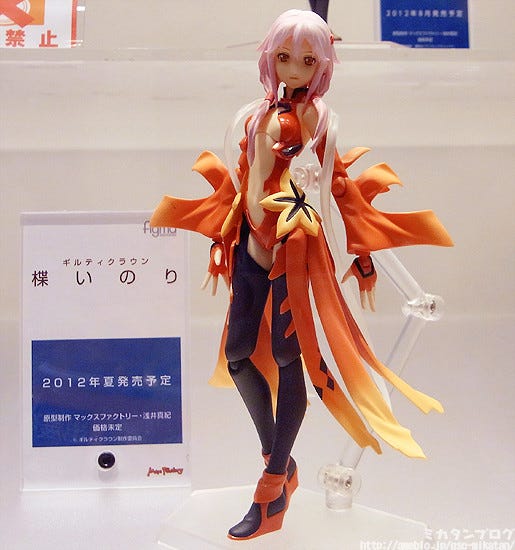 Even though she is figma size, the paint work and gradient on her outfit is absolutely outstanding!! The production team are going to cry when they see this…. it’s such a perfect rendition! 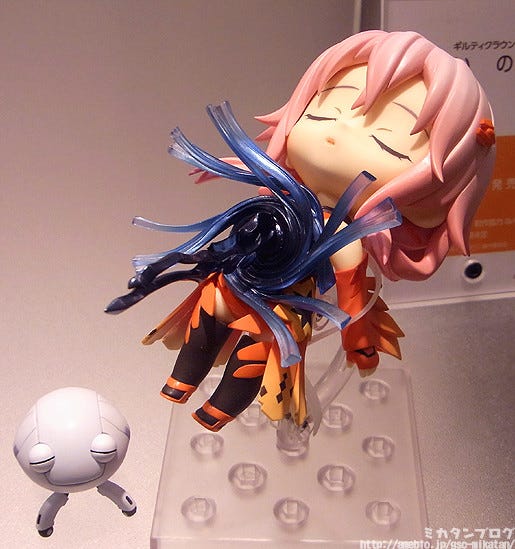 This particular pose lets you display her as her Void is being taken out! These effect parts are amazing! She’ll be announced on the GSC site soon! 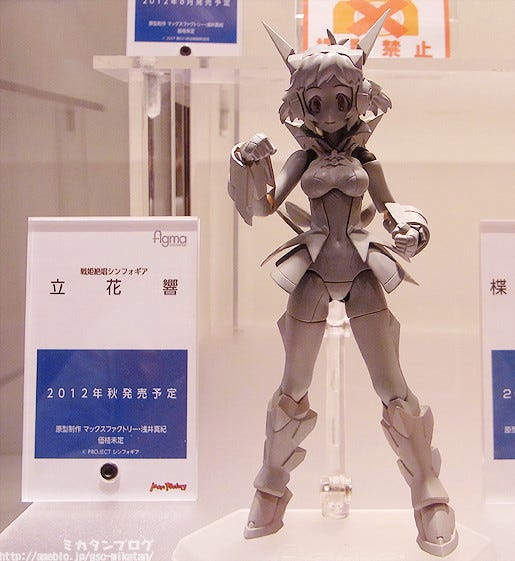 Definitely a character very suited to becoming a figma! I can’t wait to see the colored version!! She will also be announced shortly, I promise!

There is also an event surrounding the series on the way, so check that out as well!

Each ticket will have a serial number.
■ Standard Ticket  Sales Date : Undecided. 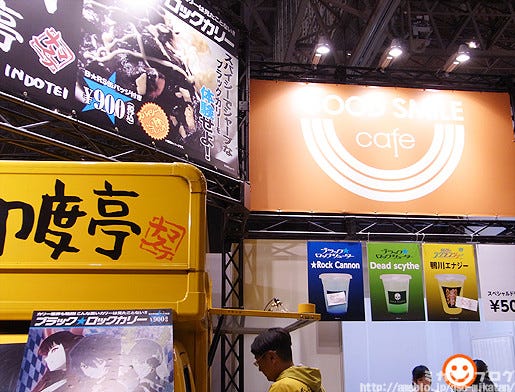 Indotei had ‘Black Rock Curry’ on sale, while Good Smile Cafe had two different BRS themed drinks as well as ‘Kamokawa Energy’. Unfortunately they all sold out very quickly… sorry to all those who didn’t get a chance to try them! 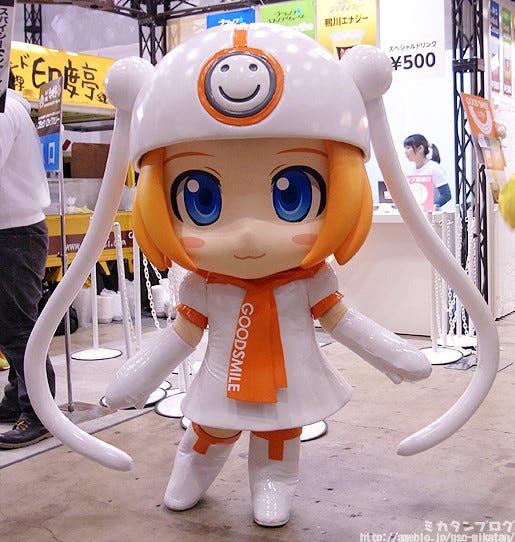 She was very popular with everyone at the event, and we even had a photo session for everyone to take photos! I joined in with the crowds and took some pictures for myself! 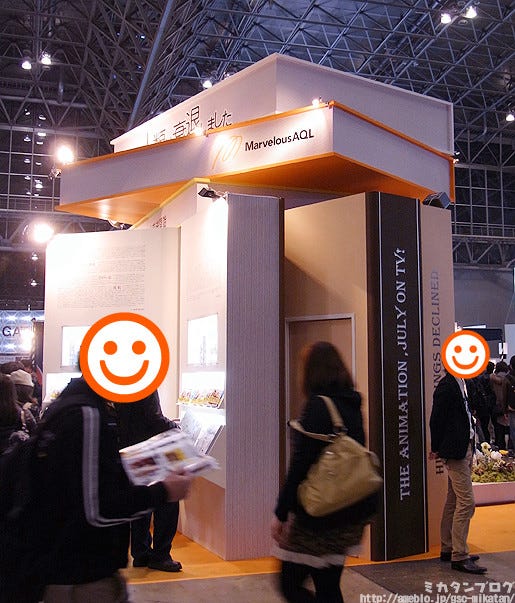 But what about the other booths at the events?!

The booth looked like a giant pile of stacked up books and was very artistic and had a lovely playful atmosphere! 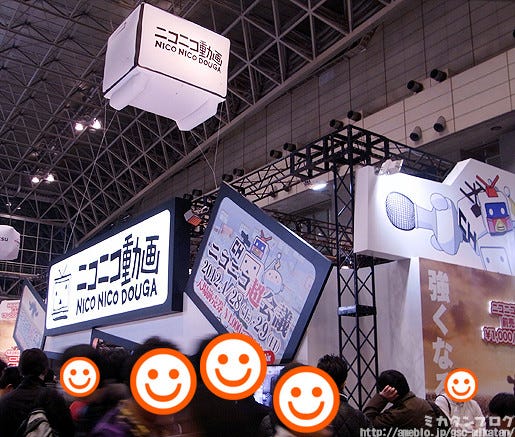 The NicoNico Douga booth was constantly in an uproar of excitement and was great fun to look around. There was a huge glass booth that they were broadcasting from. 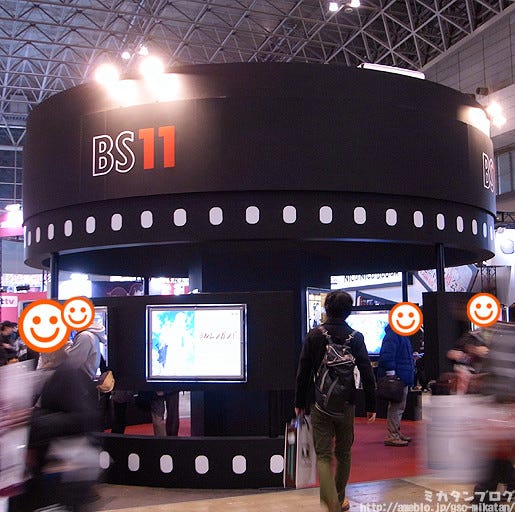 Another artistic booth – circular and based on the image of a film roll! The bulk of the booth was all digitally displayed and had a very fresh feeling to it! 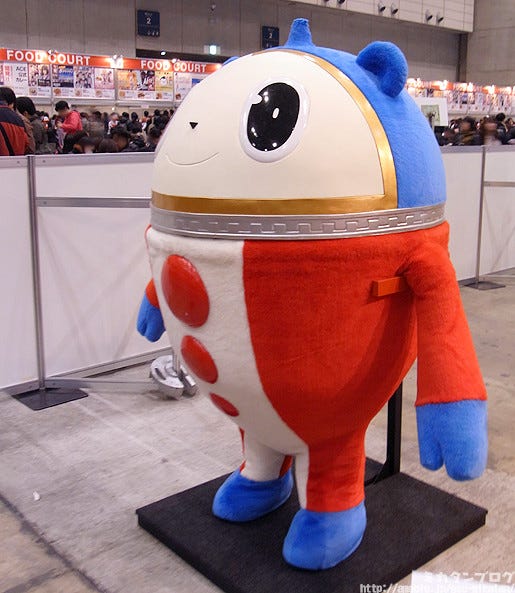 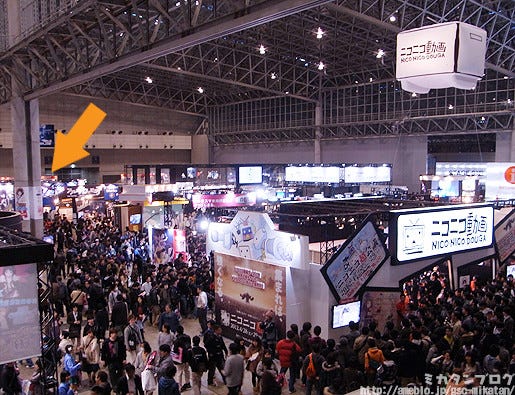 It was a very brief summary, but that brings my coverage of the Anime Contents Expo to an end!

It was GSC’s first time at the event, but we had so many people coming to visit the booth and it was a great event! It’s not certain that we’ll be attending the next ACE, but I’m glad we were able to give so many people a good look at the world of figures!

At the end of this month we’ll be attending the NicoNico Chokaigi!

We’ll be putting more info up about that shortly, so look out for it! 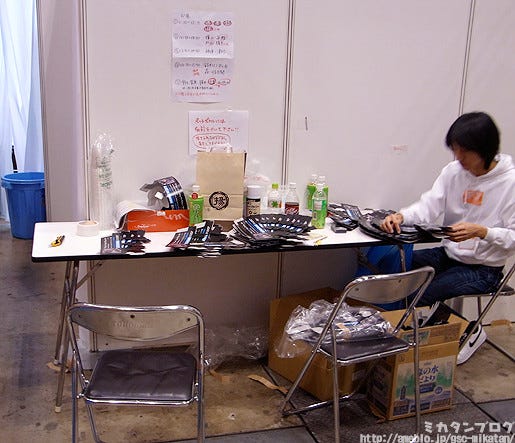 The back room of the event!

In the back we had people hard at work sorting out the goodies to be given out at the event! :P