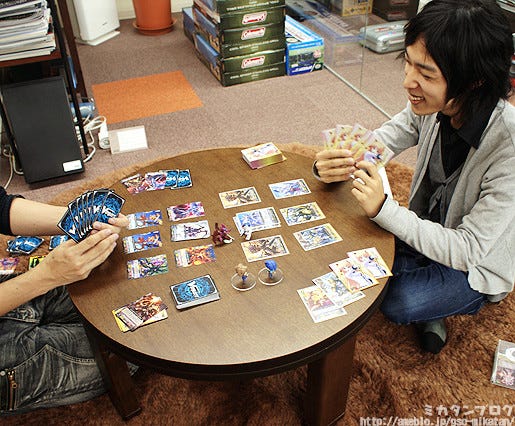 The GSC guys are addicted to Vanguard!

I’m serious too – it’s not just for the blog, they really love the card game! :P Whenever it’s time for a quick break, they all whip out their decks and start a cardfight!!

I’m afraid I just can’t get the rules right myself… (I only know about it from the anime series.) I hope that one day I can join in as a fellow cardfighter though! :P

The characters from the popular anime series ‘Cardfight!! Vanguard’ are all joining the Nendoroid series! The set includes the main characters Aichi Sendou and Toshiki Kai, as well as four of the units they summon to their cardfights!

Well… The figures are just that small!! xD 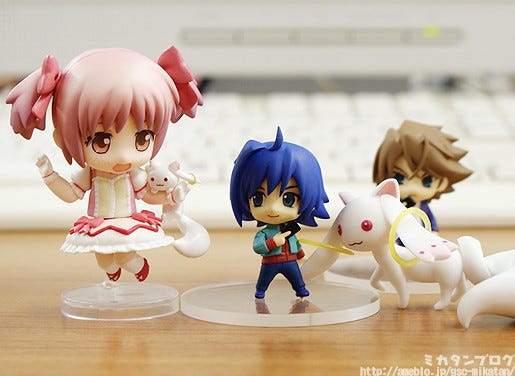 On the left we have Nendoroid Petite Madoka-san, and on the right is the Kyubey included with Nendoroid Madoka. The figures are about 4cm in height, but even so they are incredibly well sculpted and painted!!

Of course as soon as a figure becomes smaller it also means that the painting becomes harder to accomplish neatly, but looking at how well these are done really shows you just what GSC’s staff can do! 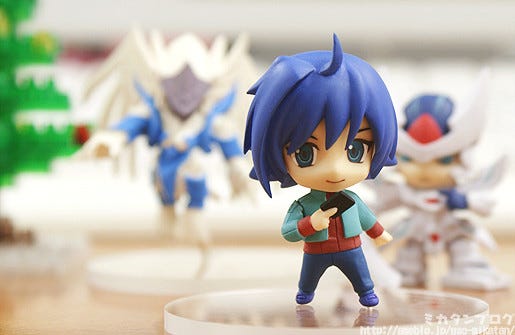 The main character of the Cardfight!! Vanguard series, Aichi-kun! He has a bit of shy and unreliable personality, but he’s still a great guy!!! (At least, I think a lot of girls feel that way!) 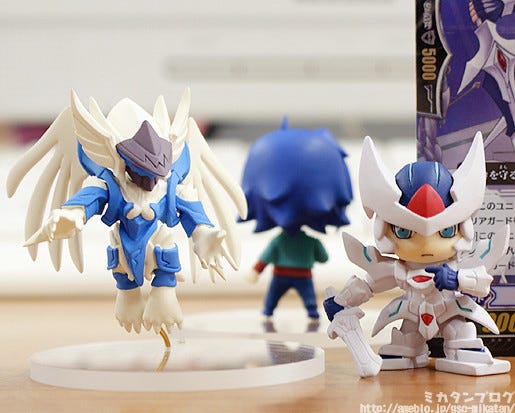 The Grade 3 Royal Paradine, ‘Soul Saber Dragon’ as well as the card the connected Aichi-kun to Kai-kun – the Blaster Blade 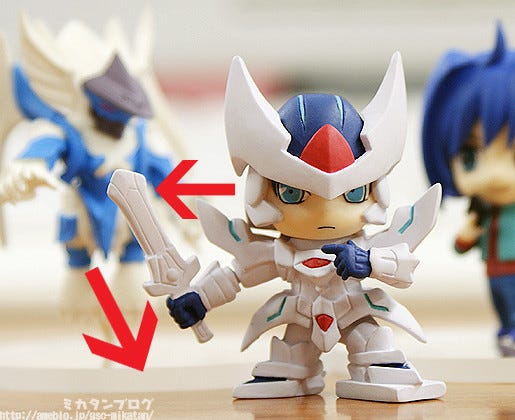 Even though it’s so small, it’s still posable!

Just what poses differs between the characters, but at the very least all of their necks and arms are movable! Such tiny figures with careful painting and posability?! GSC must be full of masochists! xD 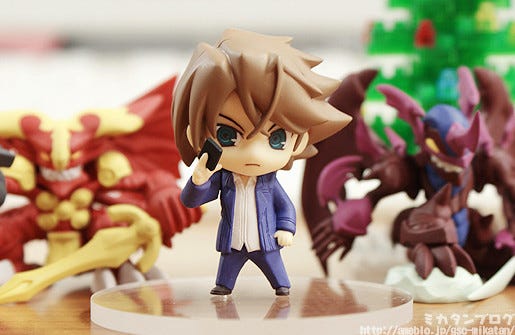 As you can see, the cool, relaxed character, Kai-kun is also included! Kai-kun is a very strong cardfighter who appears as Aichi-kun’s rival! He really looks great here! 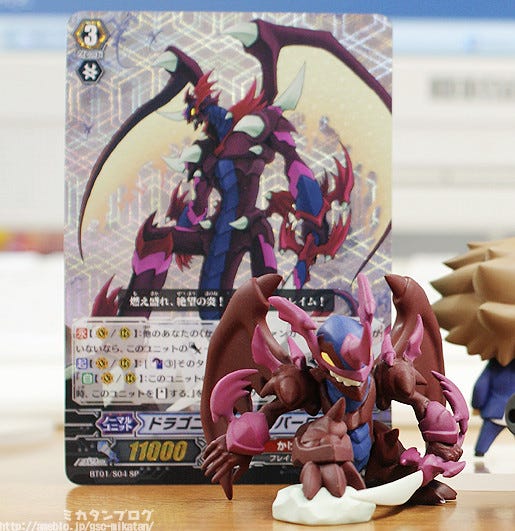 Two of Kai-kun’s units are also included!
First up is the Draconic Overlord!

The Grade 3 Dragon card, the Draconic Overlord is really impressive! The card in the background comes from the one who was in charge of this project, Tori Bird-kun! 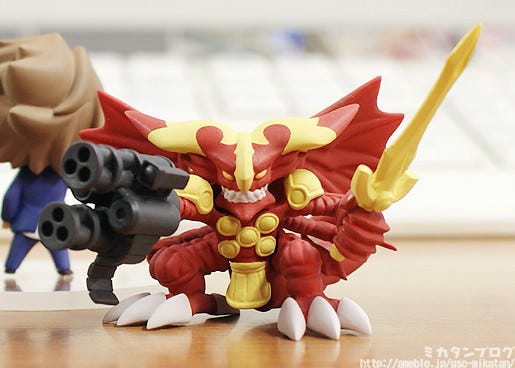 I thought it when I saw the Draconic Overlord as well… but these two are so overdone! :P Let me remind you that this figure is just 4cm in height! The minute detail on the Gatling gun is incredible! :P 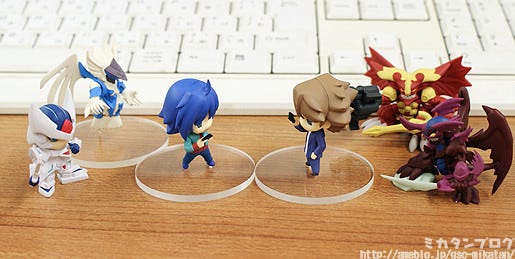 Is what they say as they both reveal their cards, and slowly but surely summon stronger units! You can display them just like this as if they were in the middle of a cardfight – plus they’re small enough to fit on a desk easily! 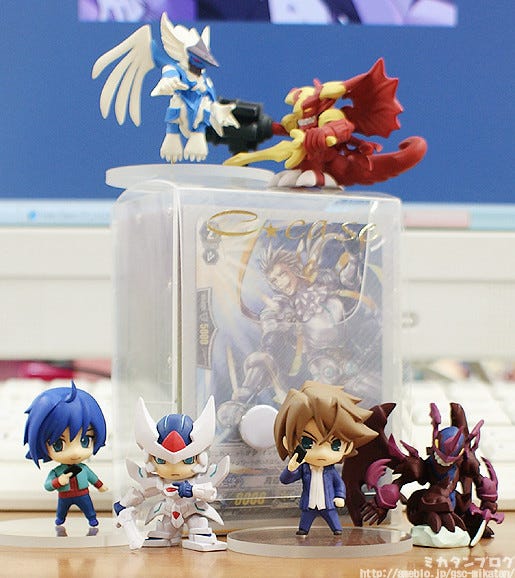 I’m sure some of you are wondering about the price…
Each is just 300JPY!

You might think that alone isn’t a bad deal, but how about this as well!
There are also three Vanguard cards to collect with the set!

For each figure you buy, one of three possible cards will be included with the figure! And according to Tori Bird – they are pretty powerful cards as well!! You get a figure as well as a good card for just 300JPY! I honestly think it’s too much of a good deal… but I guess as long as you guys are happy, thats what really counts!！

They’ll be on the GSC site from the 13th!

For preorder or sales info, be sure to check our partner shops! 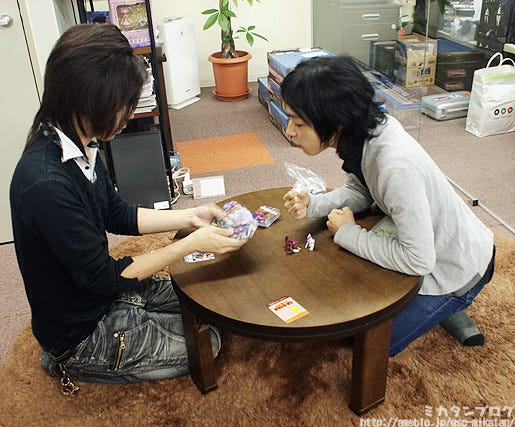