A look behind Yama-chan’s desk! 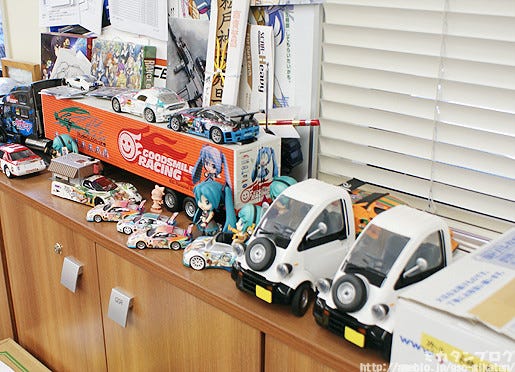 Yama-chan is a part of Good Smile Racing, and as you might imagine, is a big fan of model cars! He’s always picking up decals to make his very own model itasha as well! He also has loads of classic models from the past!

While I’d love to take a closer look at them all… I’m also very interested in what is inside that box at the front! 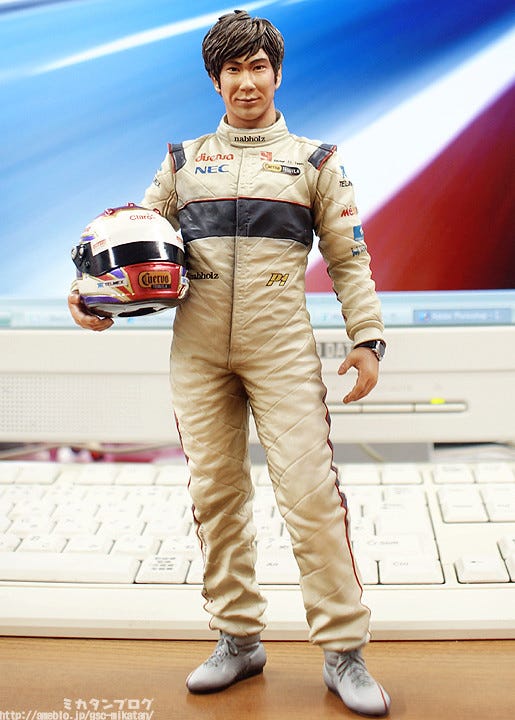 Following on from the Nendoroid and figma, comes this 1/8th scale figure of the F1 racer with an incredible track record, Kamui Kobayashi!

As I mentioned when I took a look at the Nendoroid and figma…
GSC is a sponsor for Kamui-san this season!
We’ve worked together and created GSR&Studie with TeamUKYOhis , allowing us to get the wonders of figures out to even more people than before! 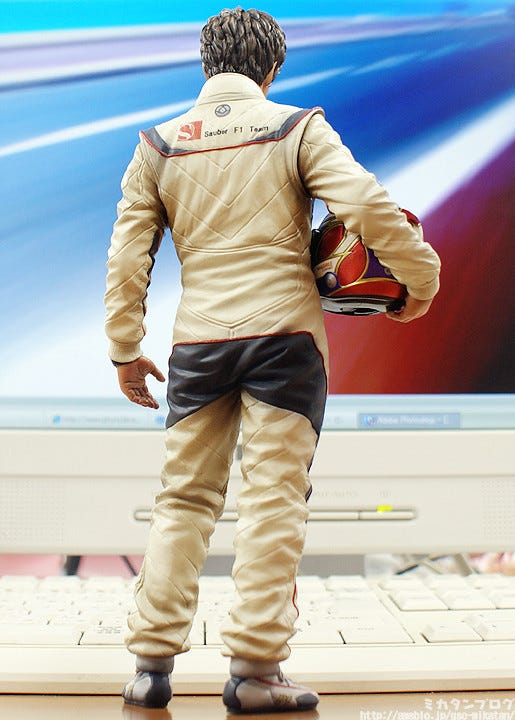 He is of course wearing his trusty racing suit and looks ready to hit the track! Even seeing this as a figure gets me nervous, but also really has a nice air of confidence! It really feels like it’s about to start moving at second. 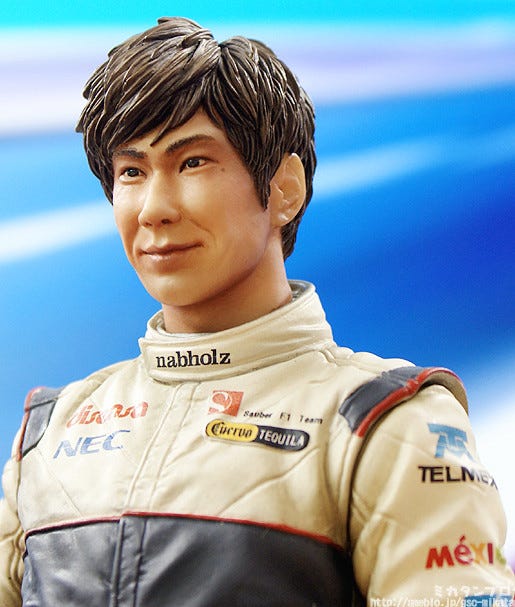 It really is identical to Kamui’s real face!!! 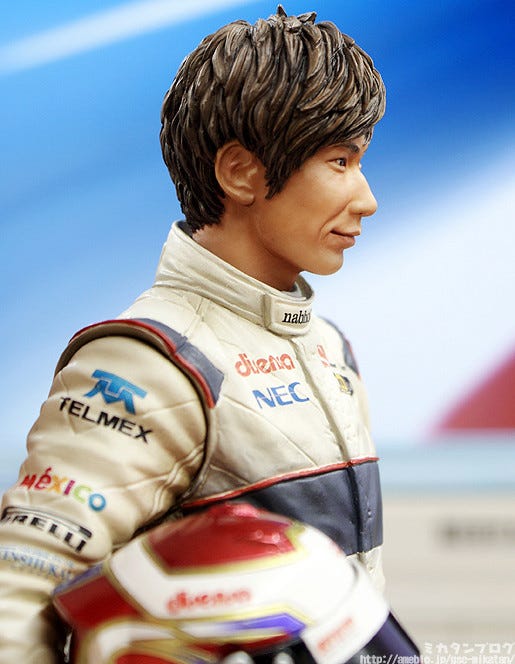 A profile shot is just as realistic!!
… I’m sure quite a few people must be wondering…

Who sculpted this masterpiece!?

Wha-? Really?! Why would you want to keep such magnificent work a secret!? Who could the mysterious sculptor be? It seems a little like Nendoron’s work to me… 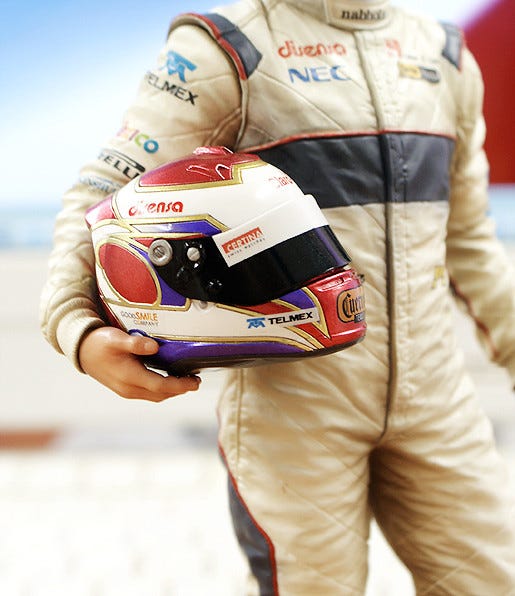 His helmet is also based on the real thing! 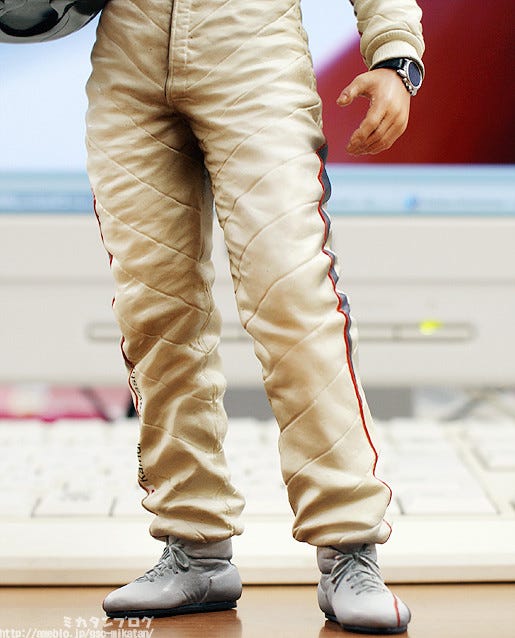 Did you know that the racing suit is actually made from a special material that helps prevent sudden shocks, and is also fire proof in the case of an accident. I actually had the chance to touch it once – it’s incredibly stiff! It’s great to see that the whole figure including the outfit is all a great rendition of the original! 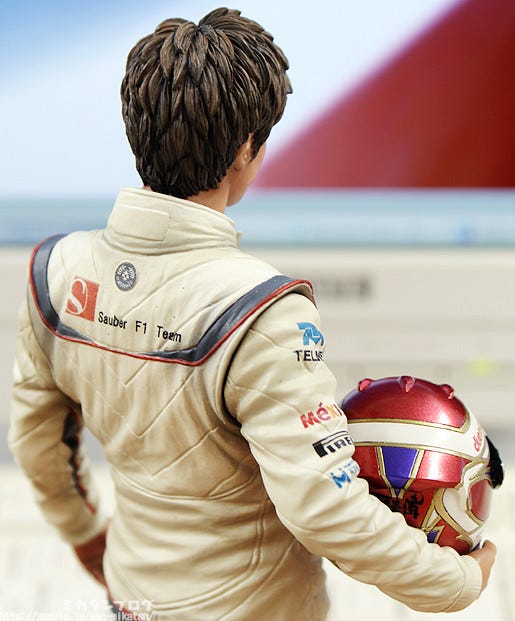 All the sponsor’s logos on his outfit!

That includes the team’s name, ‘Sauber’ on his back, and all the logos on his sleeves look just like the real logos – down to the finest of details. It’s a treat to all F1 race fans as well as to all figures fans! You really have to see how it looks for yourself!

He’ll be up on the GSC site!
For sales or preorder information, be sure to contact our partner shops!


Anyways, that’s all for today!
I hope to see you all again tomorrow!! (・∀・)ノ゛