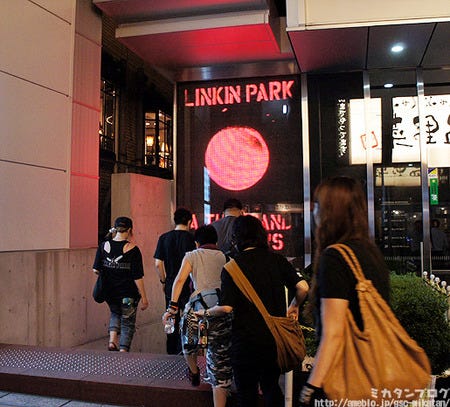 The 9th September 2011 (Friday)
The collaboration event between Linkin Park and GOODSMILE COMPANY  called ‘A Thousand Horizons ‘ was hosted at the next generation live house – nicofarre!

The event was a charity event to raise money for those affected by the earthquake and tsunami in the Tohoku region, and featured two separate parts. The first part was a video show that made use of previously unseen video footage from Linkin Park music videos, while the second part was a special art film that combines remixes of ‘A Thousand Suns’ with  nicofarre’s unique visual effects! After the show, Linkin Park’s members were also around for a talk session!

Unfortunately I was busy with work, so I was only able to join in from the second part! I had never been to nicofarre before, plus I’m a big Linkin Park fan, so I was really looking forward to it! 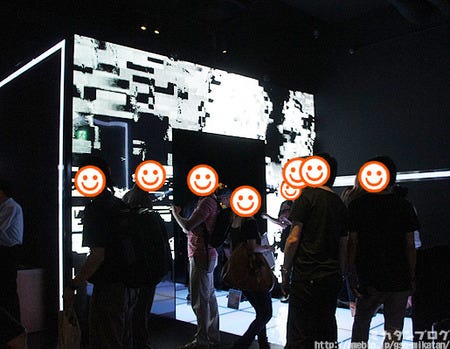 A fancy looking gate right by the entrance!

The gate itself was kind of a giant video with fancy visual effects! It was really incredible! The floor was also all lit up creating an absolutely stunning atmosphere to walk in to. 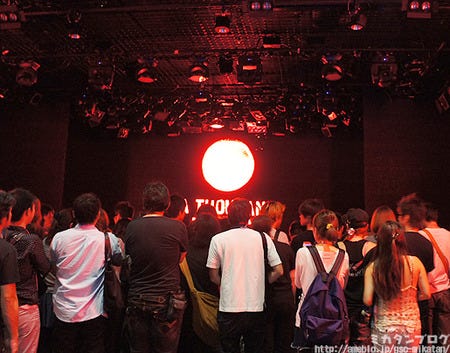 Through the gate was the area for live performances!

It really seemed like a great place to watch a live as well – it was about 1.3x the size of a classroom, and was easy to see the front from pretty much anywhere! 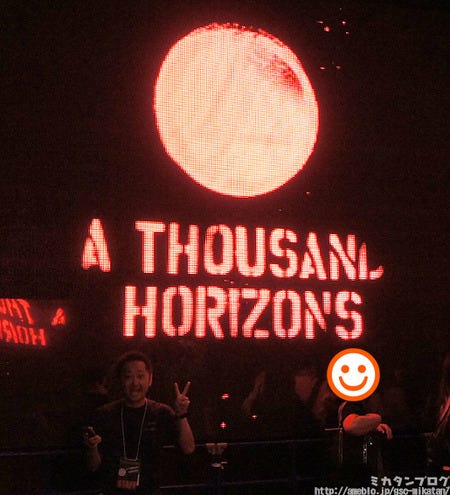 The entire back here is made up of LED lights!

This is the nicofarre everyone is always talking about!
These LED lights showed all kinds of images as well as people’s comments about the event – it really built up the tension!! Akiyama-san here seems to be caught up in it as well! :P 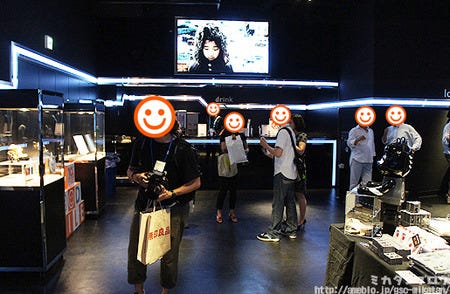 There was a little time left before the second part started…
So I went to check out the lobby!

Most of the people had already moved into the event hall for the second part, so it looks a little bit lonely here, but trust me when I say that there were so many people in here earlier that it was almost impossible to move around! 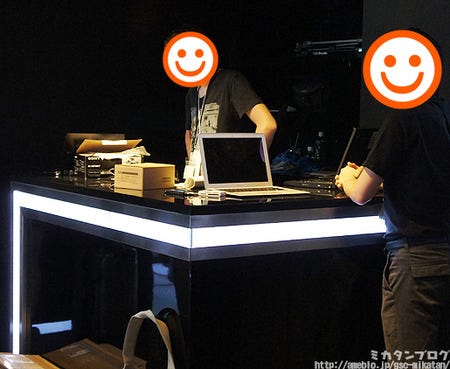 All kinds of equipment for the show!!!!

I really wasn’t sure what kind of performance to expect for my first time at nicofarre. Lots of people both from within GSC and staff from other companies came through to help out with the preparations for the event! dwango was a big help during the event! 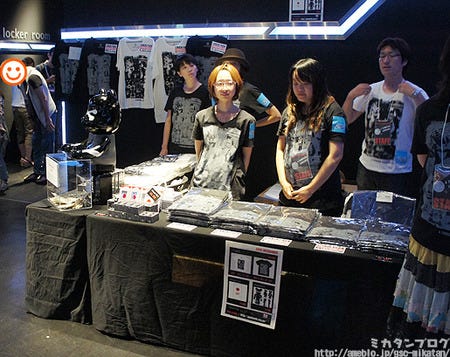 This was of course run all by Good Smile! The T-shirts the staff are wearing are the same T-shirts that were on sale at the event! 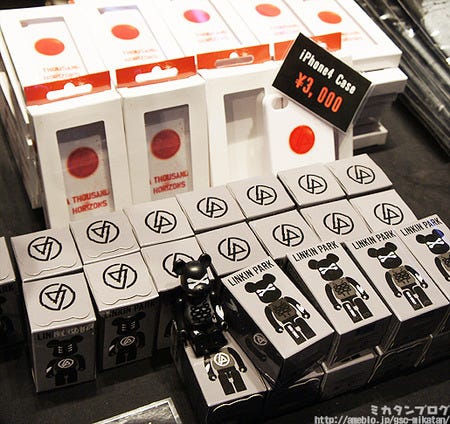 The iPhone cases had the logo of the event printed on it, and the BE＠RBRICK was a special original design by Linkin Park! They were super popular! 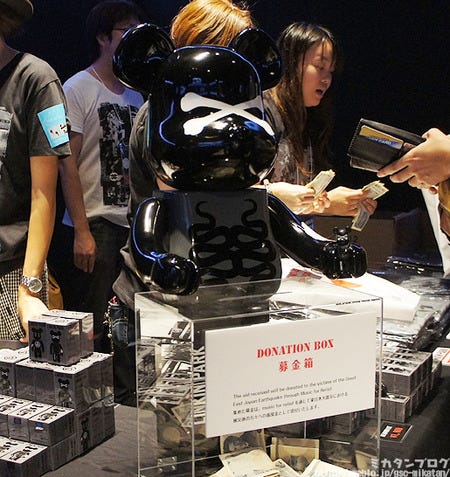 There was also a donation box being held by a giant BE＠RBRICK – a big thank you to everyone who donated! 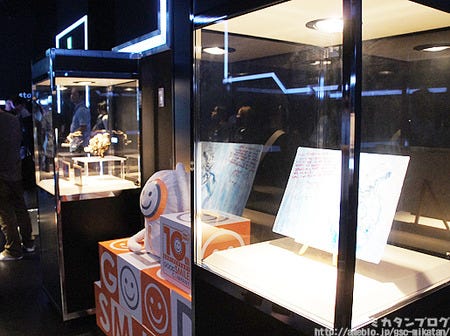 There was also a display corner!

Just what could be inside the glass cases that the giant GSC-Seijin watches over??? 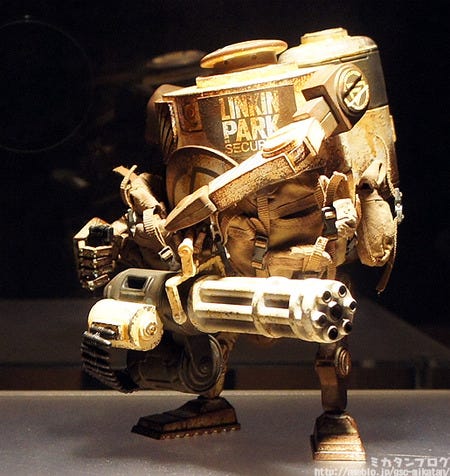 The very first public display of the Linkin Park Bramble! This wonderful model called the ‘WWRp BRAMBLE MK2 GATLING Linkin Park EXCLUSIVE’, as well as the other products mentioned above can be ordered from the Good Smile Online Shop!

A part of all the proceeds from goods sold at the event will be donated through Music For Relief to aid relief efforts to victims of the earthquake and typhoon.  The Music For Relief official website (http://www.musicforrelief.org/ ) is also accepting donations from anyone worldwide. (The actual place to donate can be found here: http://www.musicforrelief.org/page/donate-to-japan-earthquake-tsunami-relief ) 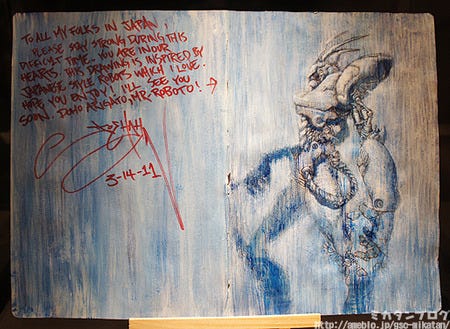 This was a special message sent to us on the day of the earthquake – your love for Japan really came through in this message and illustration! Thank you! 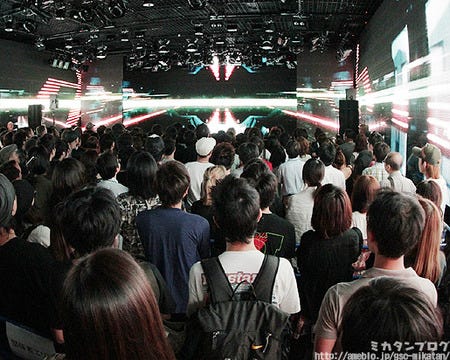 It’s time for the second part to begin!

Generally speaking, no photography was allowed in the event hall, but I just took some ‘official’ pictures. ^^ The incredible visual effects of nicofarre being used for the first public display of this special remix version!

To sum it up in a few words…

It’s astounding how nicely the sound and video work together here at nicofarre!!  Those of you who have a premium account at NicoNico will be able to watch the Timw Shift – it’s definitely worth the watch! 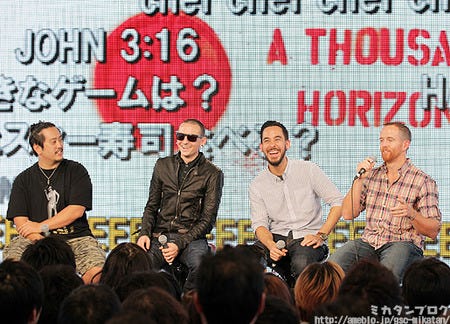 After the special art film had been shown, Joe Hahn, Chester Bennington, Mike Shinoda and Phoenix all came out for a talk session! The MC for the event was Chris Peppler! It was wonderful! 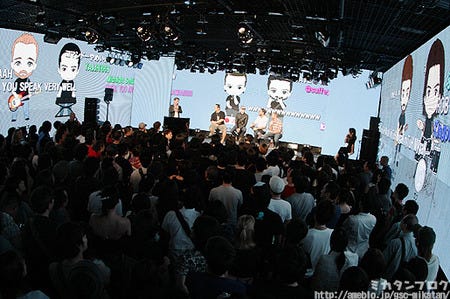 This event was the very first display of the illustrations that they will be based on! But what do the Linkin Park guys think of them??? 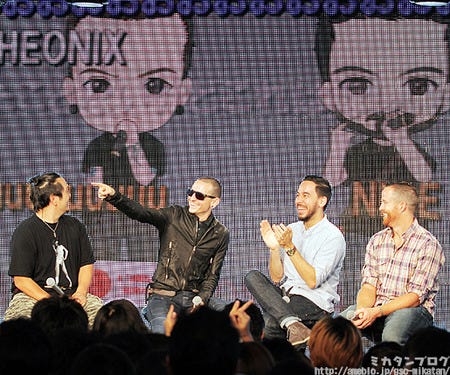 One of the questions that popped up from them was ‘will the turntables actually turn?’ – of course Gakkun is now confident that he will get them to turn! I knew we could count on you, Gakkun!! 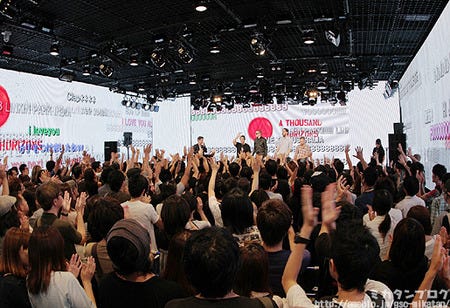 The end of the event!

After this the Linkin Park members came down from the stage and gave autographs to the audience! What a wonderful thing to do, even with their big Japan Tour coming up the next day!!

It’s hard to put into words just how wonderful the event was. I really, really enjoyed myself! I’m also really happy to see people from all over the world helping to support Japan in its time of need – it gives me the courage to carry on myself! If we work to put a smile on everybody’s face, then eventually the whole world will be smiling!

We at GSC will do our best to make more and more people smile!!