Gakkun is out on a trip to China!

Just like when Tsukki was away, Bramble is protecting the desk in his absence! He opens fire on anyone who attempts to steal any figures while he is away. 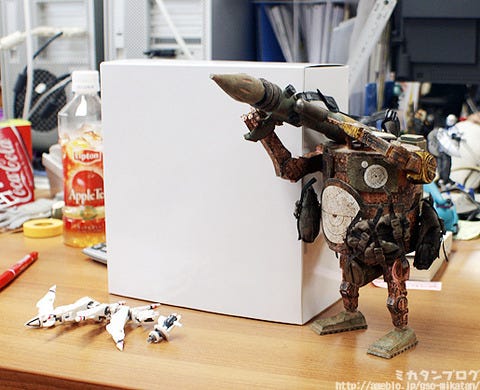 However, I shall not lose to the little Bramble!

That box is clearly a sample, and I’ll be taking it!! 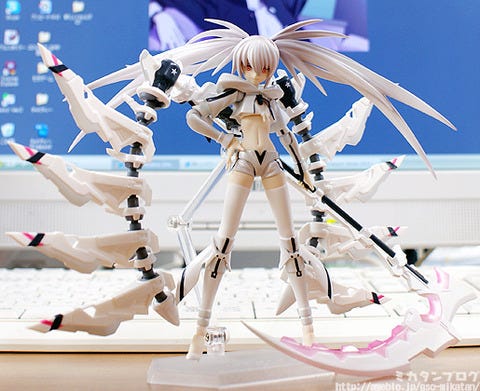 And inside that box is this beautiful sight!

Imageepoch will be releasing Black Rock Shooter THE GAME on 08/25, and this will be included with the limited edition!

Indeed it is! You can even watch the OP video over here:

You can see the incredible quality!!!

The animation work was done by ufotable, who are well known for their work on anime works such as Kara no Kyoukai! The first time I saw it I literally got goose bumps… it’s just that incredible!! I’m really looking forward to the actual game! 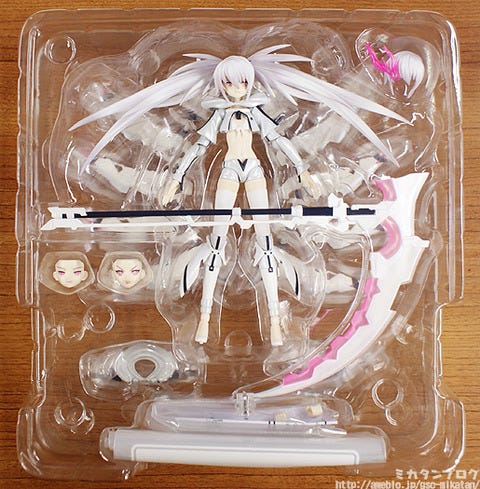 And this figma WRS is included with the limited edition of the game!

It’s filled with extras – there are two layers to it! :P

ufotable is working so hard on the animation for the game, and we are making sure the figure matches up to their incredible work! 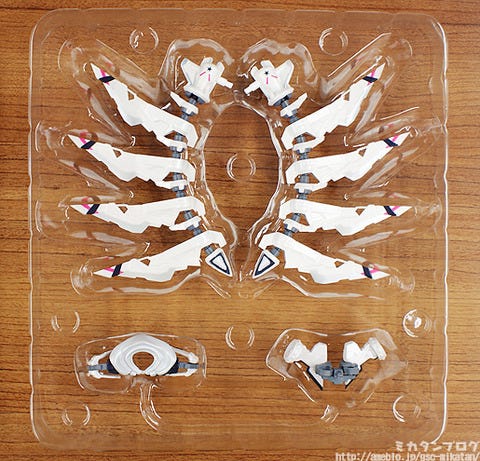 A closer look at the lower layer!

The huge wings are called ‘White Wings’, and parts in the lower right are the parts that connect the wings together! You need to push them in until you hear a click, so if they’re falling apart make sure you’ve connected them fully! 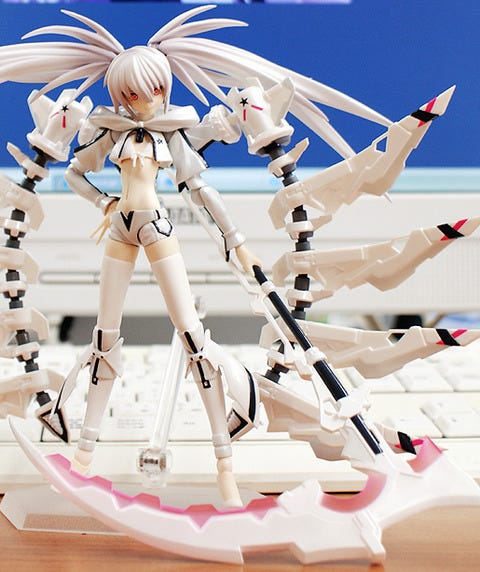 Here she is with all the parts connected up!

T-This really is a stunning sight!!

As a member of the team it’s a bit weird for me to praise it so much… but it really is just that incredible –  the sculpting, the painting – everything is so carefully detailed!

Her weapon, ‘White Scythe’ is also just as amazing!

If you look carefully the handle is split into two parts… 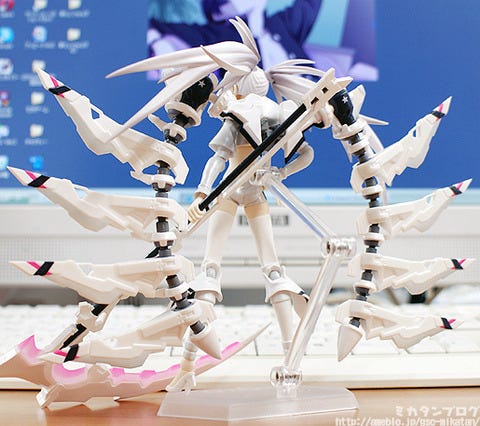 Just look at how much space she takes up! And she looks just as incredible from the back! Of course the White Wing can be removed at any time. 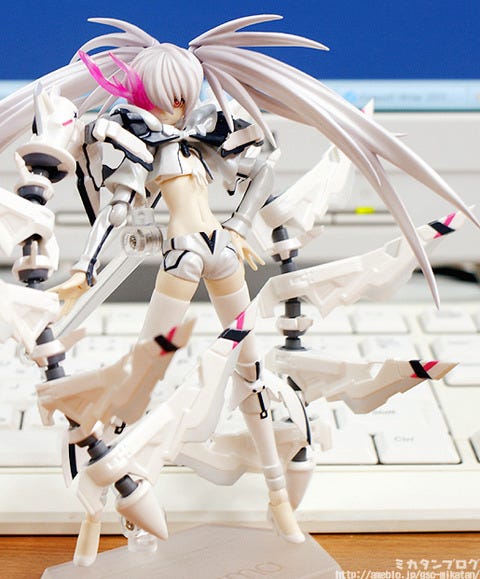 She also comes with a red flame!

In comparison to the blue flame over BRS’s eye, WRS has a red flame. It’s made using clear plastic which gives a really nice effect. She comes with a replaceable fringe part that needs to be used to attach the flame.

Plus she has a transformed collar part!

The normal version is the basic version, while using these parts creates the armored version, which even has posable tips! 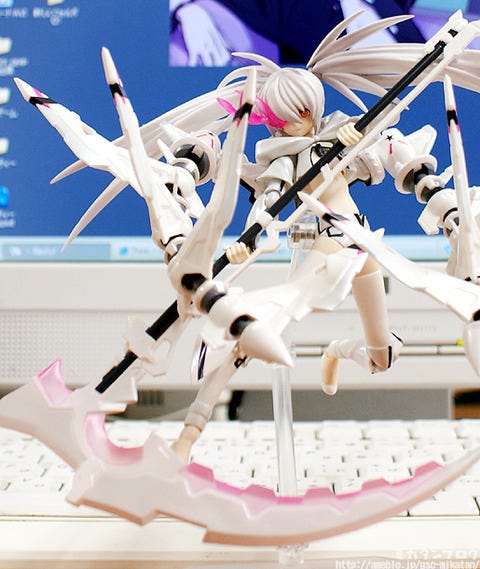 She can be posed in epic combat poses! 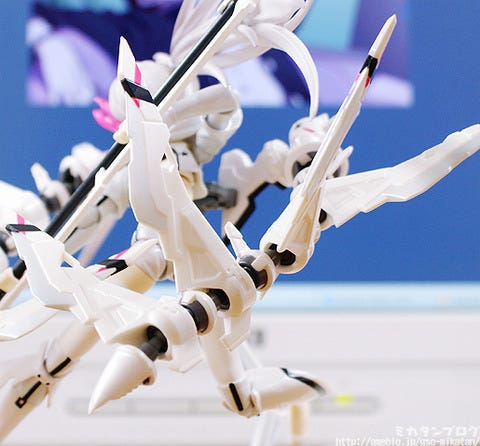 She really is incredible!!

On these long parts, each of the little sections are connected with ball joints!

You can pose it in all kinds of different windy shapes by using the loads of joints which really helps with creating incredibly dynamic poses. It’s really incredible! The connecting part for the White Wings is also fitted with a joint allowing the wings to be moved backward and forward.

There is simply nothing to criticize!  ｡･ﾟ･(ﾉД`)･ﾟ･｡ 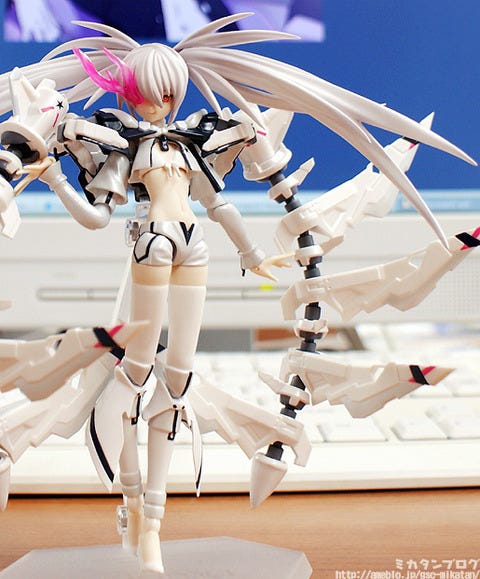 But there is still more! She also comes with three expressions!
First is her taunting expression!

She is sticking her tongue out with a fearless smile across her face!

Another thing to mention is that she is incredibly easy to pose, just like figma BRS was – she sticks in poses very easily and without any stress. 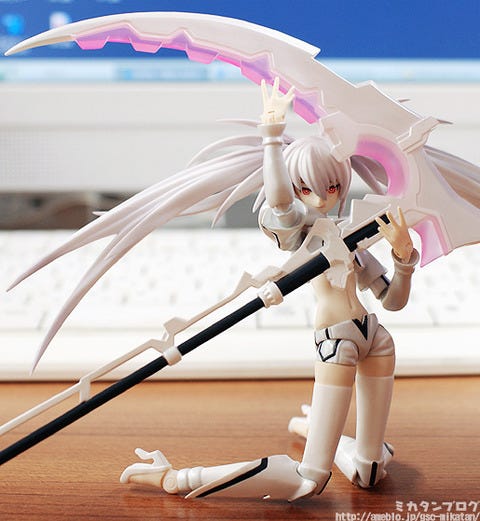 Posed without her wings or flame!

This is actually my favorite picture!

Those hips… those hips are just beautiful…

As a side note, when the wings are detached she can still be posed on the figma stand, so don’t worry about that – I just decided to not use it for this shot! 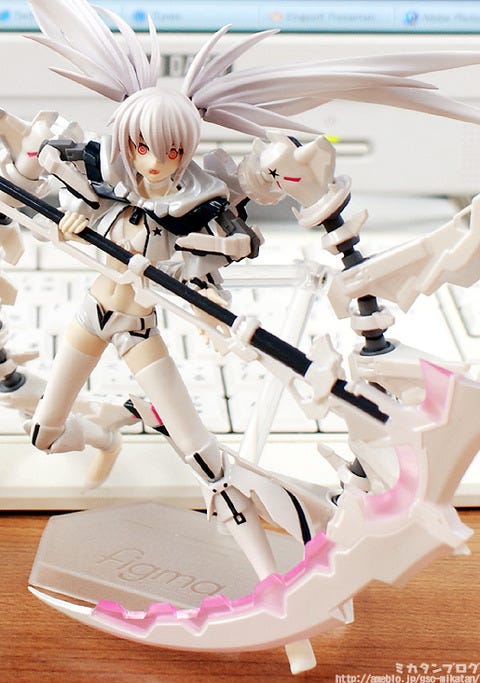 The last expression is a shouting face!

She looks fairly insane, but it looks great!

I really think this expression brings out huke’s style very nicely – I send out an applause to Gakkun out in China, as he was in charge of this figure!

It is currently available for preorder!