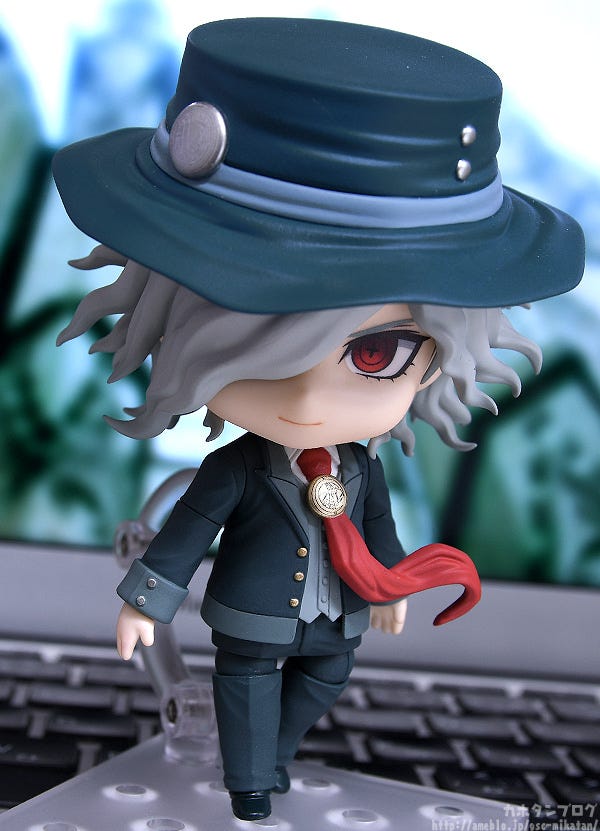 From the popular smartphone game “Fate/Grand Order” comes a Nendoroid of the Avenger-class servant King of the Cavern Edmond Dantès!

King of the Cavern Edmond Dantès from the smartphone game “Fate/Grand Order” has been transformed into an adorable Nendoroid!★

His unique hair, red scarf and perfectly fitting jacket have all been recreated to perfection! ▲I personally love the look of his vest beneath the jacket! ( ・∀・)

The design of the emblem attached to his scarf has been carefully recreated as well! By the way, the scarf features a joint, allowing you to easily move it to match his pose! ♪

In addition to his intrepid standard expression, one more expression is included! His smiling expression is included! You can almost hear him laughing! ٩( ᐛ )( ᐖ )۶

Those teeth are so cute!

“Have you ever seen Hell?” As you probably noticed, his hat is removable, and a handheld version is included, allowing you pose him with or without his hat on!

Additionally, a cup and saucer based on the “Freshly Brewed Coffee” craft essence is also included! Yep! Even in Nendoroid form, you can receive the King of the Cavern’s Valentine’s Day gift! There’s no sugar cubes or milk included, but have fun enjoying a cup of freshly brewed coffee with him! (  ˘ω˘)

Additionally, the following item will also be available for preorder soon! From the popular smartphone game “Fate/Grand Order” comes a Nendoroid of the Avenger-class servant King of the Cavern Edmond Dantès! This special Ascension version includes all the parts that are included with the standard version together with bonus parts for even more display options!

He comes with a standard expression face plate and smiling expression face plate. A handheld version of his hat is also included, along with a cup and saucer based on the “Freshly Brewed Coffee” craft essence. Additionally, the Ascension Ver. includes his cape from his third ascension appearance as well as attacking effect parts and a face plate of his “Love and Hate” expression, as though saying his “I don’t need mercy!” line from the game. Be sure to add him to your collection!

The Ascension Ver. includes even more parts in addition to those included with Nendoroid Avenger/King of the Cavern Edmond Dantès!

As you can see, he includes a “Love and Hate” expression face plate and his cape! ლ(╹◡╹ლ) ▲His cape has been carefully sculpted as though fluttering in the wind!

The eye effect part is removable, allowing you to display him with or without it! The unique appearance of his eyes has been faithfully recreated!

You can see that the white parts of his eyes feature a gradient pattern, making for an even more impactful gaze! ((｀・∀・´))

Next, let’s take a look at his right hand! An effect part to recreate one of his attacks is included! (;・`д・́)ｺﾞｸﾘ His sharp fingers and the ominous bluish-black flames have been faithfully captured! ▲Use the bent arm parts and support stand to create a pose as though he’s attacking through the air!☆

By the way, the eye effect parts attach to his front hair parts! ◎ ▲Instead of a hand part, attach the attacking effect parts directly to his arm!

Let’s take one more look at everything included! *Items marked with ★ are ONLY included in the Ascension Ver.!

Available for preorder from the 27th of June to the 8th of August!