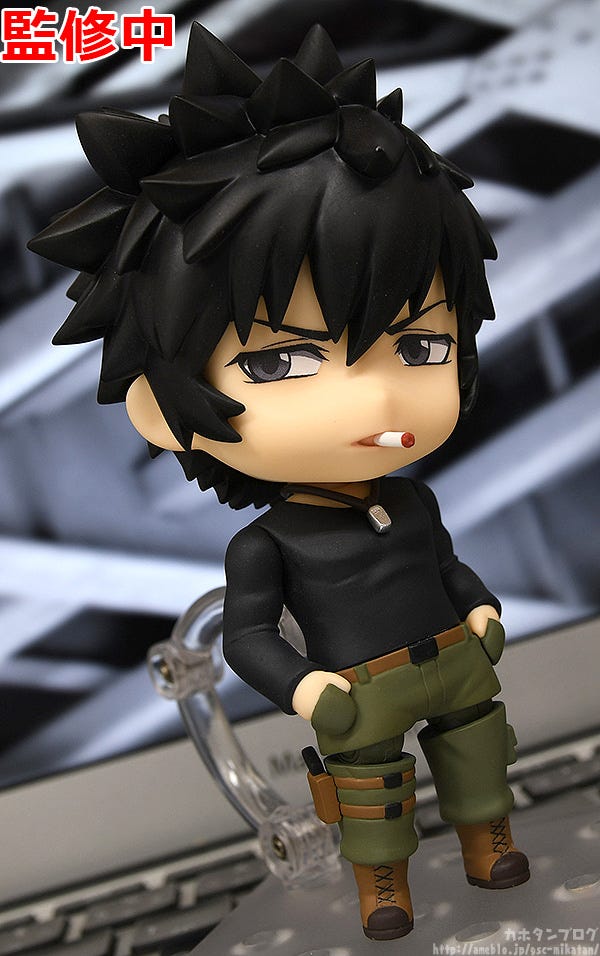 From the anime film series “PSYCHO-PASS: Sinners of the System” comes a Nendoroid of the former Enforcer of the Public Safety Bureau, Shinya Kogami. He comes with three face plates including his sharp standard expression, a shouting expression and a smoking expression.

He comes with his revolver, assault rifle, dog tags, cigarette and zippo lighter as optional parts. Be sure to add him to your collection!

On the Other Side of Love and Hate

The muscular and sharp former enforcer Shinya Kogami has been transformed into an adorable Nendoroid! Everything from his unique hairstyle and toned body, to his sharp gaze and composed demeanor has been faithfully recreated! (ﾉ｀・∀・)ﾉ

He comes with several optional parts including his revolver and assault rifle! Combine with his shouting expression to create intense scenes and situations!

By the way, the holster on his right thigh can be changed to be display his revolver holstered or unholstered!

A fitting smoking expression is also included for heavy smoker Shinya, as well as a strong though sorrowful standard expression! (｡･д･)ﾉﾞ I wonder what he’s thinking about while gazing at his zippo lighter like that!

Have fun combining his expressions and various optional parts to create your own display! ♪ Available for preorder from the 10th of January (Thu)!

At the same time, this item will become available for preorder as well! From the anime film series “PSYCHO-PASS: Sinners of the System” comes a Nendoroid of the former Enforcer of the Public Safety Bureau, Shinya Kogami. This special “SS Ver.” features additional accessories. He comes with three face plates including his sharp standard expression, a shouting expression and a smoking expression.

“I don’t think revenge is something worth giving your life for.”

In addition to what is included with Nendoroid Shinya Kogami, the SS Ver. comes with even more parts! (｀･-･´)/ As you can see, his clothes are different!

This part features a shirt and jacket layered over his tight undershirt. ◎

You might recall seeing this jacket in the “Psycho-Pass: Sinners of the System Case.3 On the Other Side of Love and Hate” visual for the film.

He looks so cool even just standing there! (ﾉω・ヽ) The second set of body parts! While you can sense his muscular build from underneath his clothes, the sculpting of the bare torso is incredibly detailed! ◎

Even his back muscles have been sculpted! ▲Even in Nendoroid size you can see his muscular build.

Be sure to take a look at his muscles from all sides when you take him home! ▲It looks great with his smoking expression too! ヽ(･ω･´ ）

Either item, if preordered from the GOODSMILE ONLINE SHOP, will include a Chimi Character Face Plate as a bonus! ★