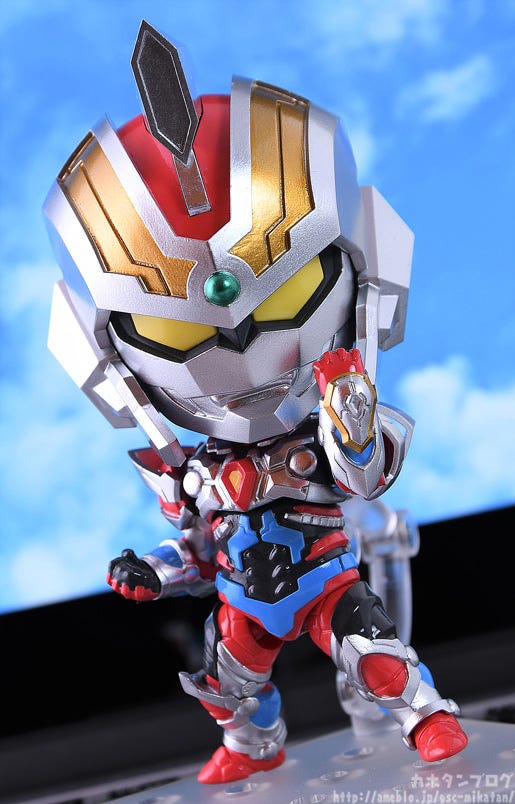 From the anime series “SSSS.GRIDMAN” comes a fully articulated Nendoroid action figure of the Hyper Agent, Gridman! In addition to being able to recreate a variety of action-packed poses, effect parts are included to recreate his Grid Beam attack! Be sure to add him to your collection!

“I am a Hyper Agent, Gridman.”

From the currently airing anime series “SSSS.GRIDMAN” comes an adorable Nendoroid of Gridman!

Even in Nendoroid form he looks so cool!

The utmost care has been taken in sculpting all of the fine details! There’s plenty of detail to see from the back as well!

With several different paint colors and a mechanical-looking glossy top coat, the Nendoroid is truly a work of art! Have fun posing him in all sorts of action poses! You can recreate the laser beam that shoots from his Primal Acceptor using the included Grid Beam effect part!

Although, if Gridman is fighting the Dévadadan… he might lose to its counterattack…

That’s why this item will be available for preorder at the same time…! From the anime series “SSSS.GRIDMAN” comes a fully articulated Nendoroid action figure of the Hyper Agent, Gridman! This DX version contains even more parts and features than Nendoroid Gridman: SSSS. Ver. available for preorder at the same time! In addition to being able to recreate a variety of action-packed poses, effect parts are included to recreate his Grid Beam attack!

Additionally, the DX version includes Gridman Calibur, a diorama-themed base, a forced-perspective hand part and light-gathering eye parts, allowing you to enjoy the world of “SSSS.GRIDMAN” even more!

A DX version is coming as well!

This isn’t just Gridman Calibur by the way!

It can transform! The parts can be separated like the Gridman Sword and Barrier Shield!

Recreate that impactful pose of Gridman with his fist to the sky!

His left hand is larger to create a forced perspective effect! As you can see, the whole left arm is quite large! It’s pretty easy to see from the side like this!

Tokusatsu filmmakers actually use parts like this for special effects, by the way!

Now you can try it too, just using your Nendoroid!

Combine it with the included diorama-themed base to make a truly impressive scene of Gridman in the city! The pedestrian bridge and all of the buildings are clearly sculpted!

Next let’s take a look at a really cool special feature of this Nendoroid! You can make Gridman’s eyes glow! Let me explain how it works! The light-gathering eye parts are a set of translucent parts that replace his eyes and an area on the back of his head.

So, if you shine light through the back, his eyes at the front will glow!

Let’s see what using a stronger light does…! I just used an iPhone light for this picture! Try it for yourself when you take him home!

Available for preorder from the 11th of December (Tue)! Available for preorder at the GOODSMILE ONLINE SHOP until the
20th of December (Thu) at 12:00JST!

The following products are currently in the works! “You have to remember your calling!”