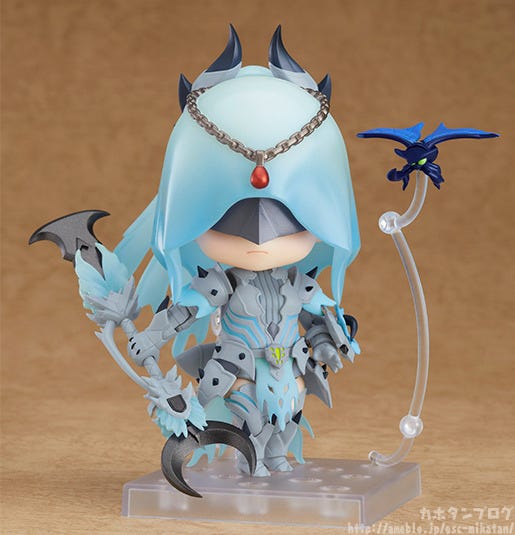 It’s starting to get colder in the mornings here in Japan! From the PlayStation 4 game “MONSTER HUNTER: WORLD” comes a fully articulated Nendoroid of a female hunter in Xeno’jiiva Beta Armor!

She comes with two face plates including a mysterious standard expression and a weakened battle expression. The Insect Glaive Xeno Shmaena, a Grancathar III and her hunter’s trusty carving knife are included as optional parts, allowing you to recreate your scenes from the game!

One that has hunted the Dark Light Dragon.

From the game MONSTER HUNTER: WORLD comes an adorable Nendoroid of the Female Hunter in Xeno’Jiiva armor! As with Nendoroid Hunter: Female Rathalos Armor Edition, the Nendoroid features articulated joints in the arms, legs and ankles, enabling you to recreate all of your favorite poses from the game!

The Xeno Shmaena and a Grancathar III as seen earlier are included.

An important piece of equipment for every hunter, a carving knife is included as well! ▲That knife looks sharp, even in Nendoroid form!

As for face plates, in addition to the standard expression shown above with a tightly closed mouth, a battle expression with a slightly open mouth is also included! |・`ω・) ▲Using the special support arm, Grancathar III can easily be posed with your Hunter!

While the veil hides most of her facial features, rest assured that her whole face is clearly painted like any other Nendoroid face plate. ◎

On the same day that she goes up for preorder, this item will be available for preorder as well! ₍₍ ◝(・ω・)◟ ⁾⁾ From the PlayStation 4 game “MONSTER HUNTER: WORLD” comes a fully articulated Nendoroid of a female hunter in Xeno’jiiva Beta Armor! This special DX version includes all the parts that are included with the standard version together with bonus parts for even more display options!

She comes with two face plates including a mysterious standard expression and a weakened battle expression. The Insect Glaive Xeno Shmaena, a Grancathar III and her hunter’s trusty carving knife are included as optional parts.

Additionally, the DX version comes with a replacement head part for displaying the hunter with a semi-short haircut, the Light Bowgun Xeno Neqiina, a firing effect part, explosion effect part and an explosive barrel, allowing you to enjoy the MONSTER HUNTER: WORLD universe even more!

One that has hunted the Dark Light Dragon and has conquered the moonlight.

The DX Ver. includes interchangeable head parts, allowing you to display her without her veil! Firing effect parts for the bowgun along with an explosion effect part are included, allowing you to recreate battle scenes from the game! (This expression works great as a serious battle expression, but when you can see her eyes without the veil, her expression changes a bit doesn’t it? She looks a bit more startled!)

With the DX Ver., a potentially high-damaging explosive barrel is included as well! (๑•̀ㅂ•́)و✧ ▲With the battle expression it looks like she’s working to move that heavy barrel! ♪

With the DX Ver., all parts from Nendoroid Hunter: Female Xeno’jiiva Beta Armor Edition are included, along with the following additional parts! ( •ω•ฅ） Pick your favorite version when preordering!

Both versions will be available for preorder from the 13th of November (Tue)!

Preorders for many products at the GOODSMILE ONLINE SHOP are closing soon! Here are the products closing 15th November 2018 (Thu) at 12:00JST!