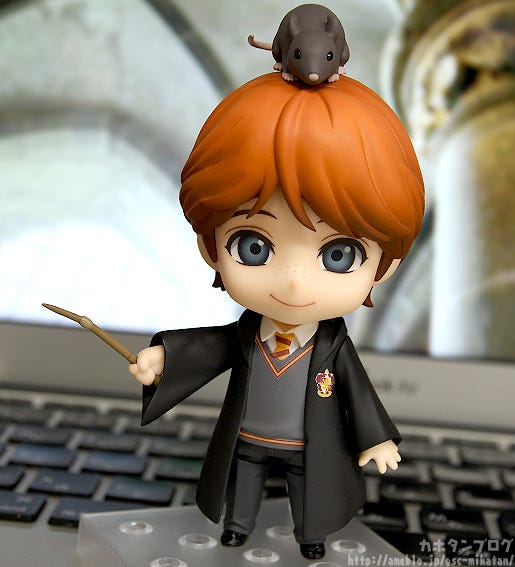 With Halloween coming up I’m going to buy all of the candy I can afford…! From the popular film series, “Harry Potter”, comes a Nendoroid action figure of Harry’s good friend, Ron Weasley! He comes with two face plates including his standard expression and his nervous expression!

He also comes with two wand parts: a normal one and a broken one! Additionally, he comes with his pet Scabbers, the Howler he received from his Mom and a broomstick as optional parts! Special parts for displaying Ron riding his broom are also included, so you can display him riding his broom along with Harry. Be sure to add him and the previously announced Nendoroid Harry Potter (sold separately) to your collection!

Dressed in his Gryffindor robe, Ron’s characteristic ginger hair, freckles and mischievous smile have all been carefully recreated in Nendoroid form! ▲His taped wand has been accurately sculpted as well!

He also comes with his pet, Scabbers! ▲Scabbers is free-standing, so have fun displaying him however you’d like!
～( C・>. Yep! The Howler he received from his mother in the second movie is included!
(/ω＼）

Ron’s vacant expression of horror as all he could do was look on at the shouting Howler has been captured perfectly! ★

The Howler comes with its own special support arm, allowing you to display it in a variety of ways! His broken wand is also included, and looks great when shown with this expression! Same as with Nendoroid Harry Potter… a broomstick and special body parts to pose him riding it are included too! Have fun posing Ron and Harry together! (o･ω･o)ﾉﾞ

When you’re tired from the daily hustle and bustle, your adorable palm-sized Nendoroid will support you! They can always be by your side to make you feel better! That is what Nendoroids are all about.

Generally speaking, Nendoroids share an identical neck joint, meaning you can mix and match your other characters for even more costume combination opportunities!

There is also the Nendoroid More series!

Your imagination is the limit when it comes to Nendoroids!

Have fun checking out the whole collection! ～(｡･ω･)ﾉﾞ

Anyway… There’s a whole lot of fun to be had with Nendoroid Ron Weasley, but be sure to preorder the previously announced Nendoroid Harry Potter for even more fun! Enjoy posing them together to recreate your favorite scenes! The Sorting Hat that comes with Nendoroid Harry Potter also fits on Ron! ▲This also works great with the nervous expression! ♪

Available for preorder from the 25th of October (Thu)!

Purchases of this item from the GOODSMILE ONLINE SHOP will include a Gryffindor Rubber Stand as a purchase bonus! ▲This is the same purchase bonus as with Nendoroid Harry Potter!

The following items are currently available for preorder or coming soon!
ヽ(○｀･v･)人(･v･´●)ﾉ Preorders for many products at the GOODSMILE ONLINE SHOP are closing soon! Here are the products closing 25th October 2018 (Thu) at 12:00JST!