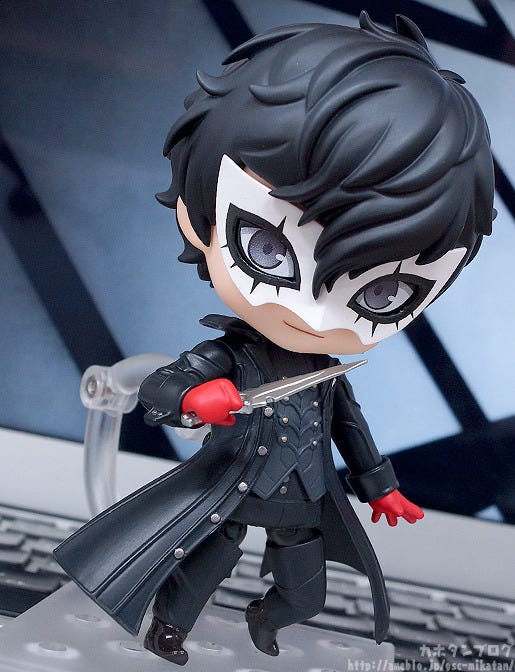 The hot summer just keeps on going… It would be great if the floor at my desk would just turn into a pool… _(:3 」∠ )_ From the popular game, “Persona5” comes a Nendoroid of the protagonist, Joker, in his Phantom Thieves outfit! In addition to his indispensable knife and gun, his mask is also included as a part that can be placed in his hand! You can recreate all kinds of scenes, like Persona summoning sequences and All-Out Attack finishes!

Two face plates, his standard expression and a grinning expression, are included. Additionally, his mask and interchangeable eye parts are included, making for a total of eight different possible expressions. Be sure to add him to your collection, along with the other Persona series Nendoroids!

The protagonist of Persona5, Joker, has arrived as an adorable Nendoroid, dressed in his Phantom Thief outfit! His long coat, flowing in the dead of night, his mysterious mask and his deep red gloves…

Everything from his clothes to his optional parts have been recreated with great care! ヽ(*´∀｀)ノ ▲ Even the handkerchief in his chest pocket…!

The flow of his soft, curly hair has also been meticulously sculpted. ♪ He comes with a composed standard expression seen above, as well as a provocative grinning expression! ◎ By the way, his mask is removable! Special front hair parts are also included so you can fully enjoy his uncovered face! ☆ Can you see what’s different from before? (The front hair part to be used with his mask is made so the hair doesn’t get in the way of the mask!)

A separate mask optional part for placing in his hand is also included! (/ω・＼)

Let’s see it now with his standard expression! ◎ Woah! Somehow he seems totally different from before…?!

It’s a small change but I’ll bet you can feel the difference too…!

The standard expression pictured earlier in the blog featured special insertable eye parts for use with the mask! Σ(･ω･ﾉ)ﾉ！ ▲This is what he looks like with just the mask! You can see the skin around his eyes now！

By the way, one more kind of insertable eye parts is included！ Even as a Nendoroid, you can enjoy his cool pose from the finish illustration!

On top of that, he comes with special hand parts so you can even pose him pulling his gloves just like in the illustration. Such a cool gesture!

Altogether with both sets of eyes, the face plates and the mask, you can combine to make a total of 8 different expressions! ★ Be sure to add the adorable leader of the Phantom Thieves of Hearts to your collection! He’ll be available for preorder on the 30th of August (Thu)!

The following Nendoroids are also in planning! (●‘∀‘●)ﾉ” Preorders for many products at the GOODSMILE ONLINE SHOP are closing soon! Here are the products closing 30th August 2018 (Thu) at 12:00JST!