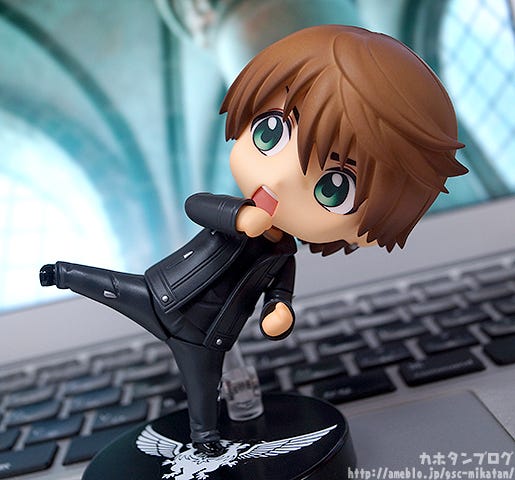 Today I’m going to be taking a look at…
Nendoroid Masaki Amamiya! “HIGH&LOW g-sword” brings out the atmosphere of HIGH&LOW with cute illustrations by CLAMP, and from that series comes a Nendoroid of the second son of the Amamiya Brothers – Masaki Amamiya. He comes with two face plates including a standard expression as well as a serious expression ready to start a fight!

Optional parts include the first ever Nendoroid high kick parts, as well as ice pop parts for use with Nendoroid Hiroto Amamiya (sold separately). He also comes with a selection of interchangeable arm and leg parts allowing for all sorts of cute poses in Nendoroid size! Be sure to add him to your collection!

“Listen to your older brother!”

From HIGH&LOW g-sword comes an adorable Nendoroid of the second eldest of the Amamiya Brothers, Masaki Amamiya! ★

The outfit for the Nendoroid is based on the cover for the HiGH&LOW g-sword special volume! The mostly black outfit is accented with silver zippers and the different in paintwork between the inner and outer layers of his outfit show the different textures in lovely detail!

His iconic hairstyle has also been faithfully sculpted so that you can even make it out when taking a look at him from the side or back! ▲The natural flow of his hair at the back also looks great! ♪

Just like Nendoroid Cobra he comes with a special black base! This time around the base features Amamiya Brothers emblem!

Let’s move onto his face plates and interchangeable parts! In the photos above we have his refreshing standard smiling face, but he also comes with a serious expression more suited to fighting scenes! ▲ Look at those serious eyebrows!!

But perhaps even more important is this leg part!!! In order to capture his impressive legwork while fighting he comes with a special high kicking leg part – the first ever high kick Nendoroid part!! ヽ(*´Д｀*)ﾉ

The normal Nendoroid leg parts of course can’t quite get up to this angle, so in order to better display him in an epic kicking pose these alternate parts were included!!

“Listen to your older brother!” It also works great when posing him with Hiroto Amamiya! (｀・ω・´)ゞ

In addition to the parts above, he also comes with ice pop parts and hand parts to hold them! He can be displayed holding them alone, but… He can also give one to Nendoroid Hiroto Amamiya who is scheduled to go up for preorder next month!! As a side note, her also looks amazing with some of the parts from the Nendoroid More series! Here are some examples! Be sure to add the second eldest of the Amamiya Brothers to your collection!
Nendoroid Masaki Amamiya! He is currently up for preorder!☆

Also don’t forget that Nendoroid Cobra is scheduled for release in February 2018! Look forward to him!! (｡･ω･)ﾉﾞ

Preorders for many products at the GOODSMILE ONLINE SHOP are closing soon! Here are the products closing on the 7th of December (JST)!