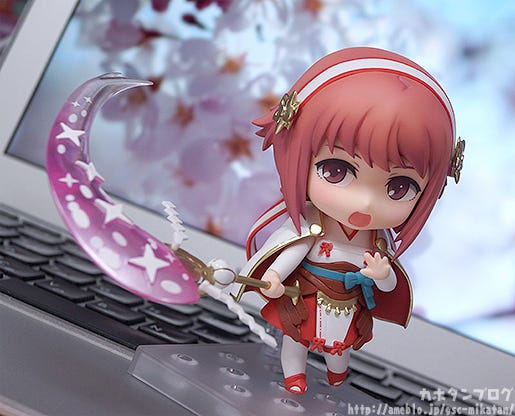 It always feels like Monday to be after a long weekend to me! I’m not in Tuesday gear yet!! Today I’m going to be taking a look at… From the popular game “Fire Emblem Fates” comes a Nendoroid of the shy and reserved Princess of Hoshido, Sakura! She comes with three face plates including a standard smiling face, a gallant shouting face as well as a cute embarrassed face to show her shy side.

Optional parts include her staff together with healing effect parts as well as a rod of dumplings, one of her favorite sweet foods! Be sure to display Nendoroid Sakura with the previously released Nendoroid Elise and enjoy the two friends together!

The shy and reserved Princess of Hoshido is joining the Nendoroids!

From the 14th game in the Fire Emblem series, “Fire Emblem Fates” comes a Nendoroid of the shy, youngest of the Hoshidan royal siblings – Sakura! ✿

Her iconic miko priestess-style outfit and staff have all been faithfully converted into chibi Nendoroid size! ▲ Even the Japanese-style shoes have been captured! ♪

From the back we can see the pointy parts of her hairstyle and her Alice band are also included on the Nendoroid, as well as the lovely big ribbon tied at the back! The left and right sides of her white cape are fitted with joints allowing them to move around for different nuances while posing! ((´д`●))三((●´д`))

It can also be completely removed! ▲ The Nendoroid allows for all sorts of different possibilities!

She comes with a total of three face plates including the gentle smile above! The second one is a shouting expression more suited to combat scenes! Special healing effect parts are included with the Nendoroid and can be attached to the staff to show her supporting her teammates! ε=(｡・д・｡) ▲ The effect parts have a semi-transparent look covered with stars! Cute! The slightly blushed cheeks with a gentle smile as she looks our way… this is the reason she is the #1 healer in the army!

Plus in her hands she holds a rod of multicolored dumplings! ♥ Sakura is known to be a character that loves sweet foods, and this item actually appeared in the game as a joke weapon, so this was a lovely item to include with the Nendoroid!

She looks great displayed alone, but also consider displaying her with the previously released Nendoroid Elise! ▲A pose that make it look like Elise is grabbing her hands!

The pose above has Sakura’s hands together for Elise to grab on to, but Sakura alone this this pose is also very cute! ( ･ㅂ･)و ̑̑ ｸﾞｯ Be sure to add the young Hoshidan Princess to your collection!
Nendoroid Sakura!!

She’ll be up for preorder from tomorrow!☆

Preorders for many products at the GOODSMILE ONLINE SHOP are closing soon! Here are the products closing on the 5th and 12th October (JST)!