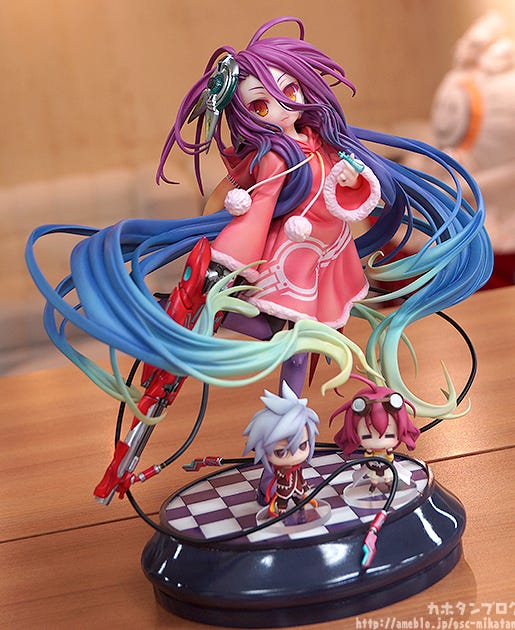 Today I’m going to be taking a look at the 1/7th scale figure from Phat! Company that is currently up for preorder…
Schwi! From the anime movie “No Game No Life -Zero-” comes a 1/7th scale figure of the ex-machina heroine, Schwi! The figure is based on the key visual from the original novel that the movie was based on, and captures Schwi as faithfully as possible with careful use of colors, intricate sculpting and other creative touches.

The large gun she holds in her right hand as well as the artificial nerve cords around her hips have a detailed mechanical appearance which contrasts beautifully with the cute, soft-looking appearance of her body.

Similar to the previously released 1/7th scale figures of Shiro and Jibril, she also comes with chibi figures to display beside her – this time of Riku and Corone, allowing you to enjoy displaying Schwi together with her family!

From the movie of No Game No Life, “No Game No Life -Zero-“ comes a 1/7th scale figure of the ex-machina girl Schwi! The sculpting and paintwork all over the figure from her cute appearance to the mechanical parts of her character have all been faithfully preserved, with the gradient of her hair also looking amazing! ☆ ▲ She looks stunning from the back as well!

The figure is based on the key visual from the original light novel! Let’s take a closer look at some of the main highlights of the figure!

The first thing I think anyone will notice is the gradient of her hair! ♥ From yellow to green to blue to purple! Such a lovely mix of color!!The sculpt of the hair also has a very dynamic feeling as it flows around her, and the hair in front of her face also has a gentle wafting appearance that adds a gentle, floating feel to the figure! ε=(｡・д・｡) The ex-machina parts of her design have a rigid, mechanical feeling to them that add a lovely contrast to the figure!♪ You can see the amount of detail put into the design, but it is even more impressive to see in person!! Be sure to take a nice close look if you add her to your collection! ヽ(*´∀｀)ノ Look at the sharp, shiny and metallic appearance! The difference between her soft skin, the ex-machina parts and her long flowing hair is such a treat for the eyes! Those cute wide eyes, little mouth and slight blush make for such an amazingly cute face!! Just looking her in the eyes makes me want to jump to her side and protect her however I can!! Taking a photo from a slightly higher angle allows you to match with her gaze nicely which makes for a very nice shot! ♡

As with the previous figures in Phat’s No Game No Life series, Schwi also comes with two little chibi figures to display beside her! This time around we have Riku and Corone! ▲ They may be small, but they are still nice and detailed!

The previously released Shiro and Jibril also came with little figures to display with the larger scale figure! The chibi figures also come with their own little stands, so you can display then wherever you like! ♪

Last but not least, a quick spin of the figure!

As you can see, even though the figure is 1/7th scale, the size of her hair makes for a very impressive size!

You’ll have to find your favorite angle once she joins your collection!

She is currently available for preorder!