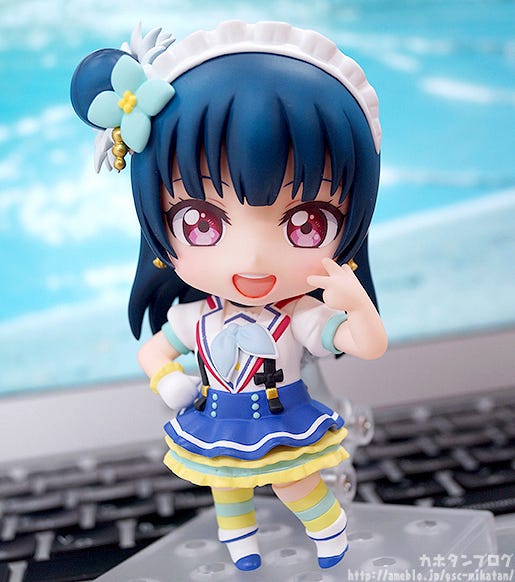 I recently found out that you can rent chocolate fountain machines and am excited to try it for myself. I guess my want for chocolate is increasing as my body realizes that Valentine’s day is getting closer…!

Anyway, today I’m going to be taking a look at…
Nendoroid Yoshiko Tsushima! From the anime series ‘LoveLive!Sunshine!!’ comes a Nendoroid of the Aqours member Yoshiko Tsushima wearing her outfit from the song ‘Aozora Jumping Heart’! She comes with both a cheerful standard expression as well as her signature winking pose completely in ‘fallen angel’ mood!

“I am Yohane, the fallen angel! Descended from above!!”

The first year student at Uranohoshi Girls’ High School who refers to herself as Yohane the fallen angel! Yoshiko Tsushima is joining the Nendoroid series!! ♥

Just like the previous Nendoroids in the series she is wearing the ‘Aozora Jumping Heart’ outfit which has a bit of a sailor uniform appearance filled with frills, puffy sleeves and a cute ribbon on her chest! You can also just make out the choker around her neck which has been faithfully sculpted onto the design! (∩・∀・)∩ The details on her hair accessory and earrings are also lovely, and the deep blue hair flows down her back beautifully! ▲ It’s a bit hard to see, but the collar of her outfit has been faithfully included!

The figure comes with a selection of interchangeable arm parts which allow you to recreate various poses including the one from the last scene of the opening theme which I used as the very first photo on today’s blog!  ε- (´ー`*) ▲ Waving to all her “little demons” in the audience! ☆ ▲Arms out wide – another pose taken from the opening theme! ヽ(*´Д｀*)ﾉ

I’m sure fans will enjoy recreating various poses as well as coming up with all original poses for the beautiful fallen angel!

But that’s not all! She also comes with an alternate face plate that allows you to pose her in her signature pose where she fully looks like she is in the role of the fallen angel! (/ω・＼) ▲ The winking expression gives her a much more mature appearance!

In addition, she also comes with a black feather part…. Which can even be placed in her hair!

In other words you can completely recreate Yoshiko in Yohane mode!! ♥ “Come now. Join me and my little demons!“

As a side note, the ‘ball of hair’ is included as two separate parts – one standard version and another one with a hole in that allows you to insert the feather for this pose!

Simply arrange her however your prefer! ▲ The contrast to her smiling expression is amazing!

Be sure to add the fallen angel Yohane to your collection!
Nendoroid Yoshiko Tsushima!

She is currently up for preorder! ♥ Be sure to consider it when preordering! ♡