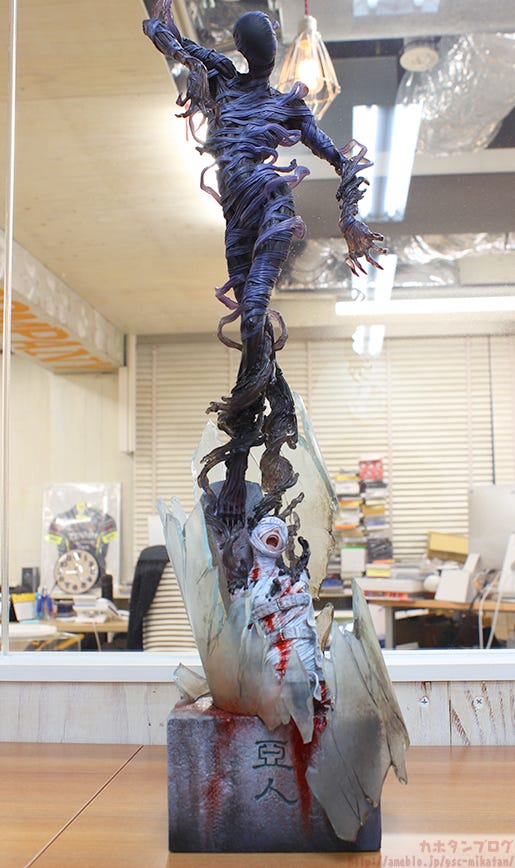 Hi everyone! Suwabe (@gsc_suwabe) from the Corporate Planning Division here! Today I’m going to be continuing with my review of the new figures from Ajin: Demi Human!

▼BOTH NOW AVAILABLE FOR PREORDER!

From the anime series ‘Ajin: Demi-Human’ comes a polystone statue to join Good Smile Company’s ‘Wonderful Hobby Selection’ series of top-quality figures! The figure was originally conceived by Takayuki Takeya and has been intricately converted into figure form by Good Smile Company!

Takayuki Takeya’s unique interpretations of the Ajin make for a highly complex sculpt have been captured through the combination of different materials on different parts of the figure – a mass produced product that can easily be called a work of art due to the incredible level of quality preserved in the figure. The figure stands over 400mm in height and no matter how close you look the most intricate of details have been faithfully preserved to capture the ominous atmosphere of the ‘Ajin: Demi Human’ universe within the figure. The figure will be limited to 500 units worldwide, each engraved with a unique serial number. In the last blog I took a look at the Izumi Shimomira and Kuro-chan set, but today I’m instead going to be focusing on this amazing work of art!

The 17th figure to join the WONDERFUL HOBBY SELECTION!

On first glance you can’t help but imagine him painfully shouting out for help… the sculpting and coloring are on such a high level, and the amount of blood shown on the figure is quite a rare sight for a figure from GSC!

★ What is the WONHOBBY SELECTION? ★

A selection of products brought to you by Good Smile Company, featuring only the highest quality figures. Meticulous sculptwork, intricate paintwork with unique artistic flair and superior quality products made for those wanting to add only the best to their collection. Experience the Extraordinary.

With the original concept and design by Takayuki Takeya and sculptwork by Takayuki Higashi this was bound to be a shocking figure right from the onset! ▲ This original concept art might also be included with the figure!
(Still a maybe for now though… don’t tell anyone else just yet!)

For those of you who recognise the name but are not too sure where from, you might be thinking of the previously released WONHOBBY SELECTION figure – The Colossus Titan: TAKAYUKI TAKEYA Ver.!

This time around the figure definitely has a different kind of presence, but still such an impactful one! It stands approximately 460mm in height!

▲ Size compared to an iPhone6S!

We also have a special site open where you can compare the size of the product to various different items! ★ *Best viewed from a desktop PC!

The Ajin itself stands tall with a mostly black base color, but also makes use of semi-transparent parts and some purple highlights that brings out that kind of ‘invisible’, wafting appearance very effectively! The sculpt of the bandage parts that wrap around the body are sculpted with a dynamic appearance that makes it look as if each of the stands are moving around randomly.

The areas underneath the bandages that have a kind of raw muscular look to them are also unbelievably detailed! Just looking at them makes you want to zoom in and see more! From the back the thin appearance and inhuman movements are beautifully captured! Such an ominous view! But as we move our eyes further toward the bottom of the figure things get more and more gruesome… I suggest any squeamish people get out while they still can!!

We’ll start from the back for slightly less gore…! ▼ The dirty, broken appearance of the side of the figure has such a realistic texture to it that it could easily be mistaken for real glass! The belts that are tying the body down with metal clasps and the cold slate covered in blood that he rests his back upon all build such a dark and painful atmosphere.

Next we move to the front… prepare yourselves! It hurts! It hurts! Stop the pain!!

But let me repeat myself from the last blog! The fact that it almost hurts to look at it is what makes it such an incredible figure!!

The emotional aspect is one thing, but the amount of detail is also absolutely fantastic – look at the way each and every one of the bandages folds over each other, along with the blood that has slowly soaked through the bandages to dye them red…

There were so many times that I had to strain my face in pain while I was taking photos of the figure, editing the photos and even while writing the blog… As if there wasn’t enough blood on the top, the base of the figure also has blood slowly pooling up and staining the surface of the base. I don’t think I’ve even seen this amount of blood in real life, but even when I know it is a figure I can understand the fear that these bloody red stains bring…

The two kanji on the bottom of the base read ‘Ajin’, and have a nice trail of blood seeping down to their right just to add to the nightmarish atmosphere. You may have noticed my review for this figure is focusing on rather unpleasant details… but just to make it clear these are all words of praise!! Don’t get me wrong, the figure really is an absolute work of art!
(No matter how creepy it may be!)

▼Last but not least a look at the cracked glass on the opposite side! （´-`）.｡oO（ Blood is that which flows on the brink between life and death… )