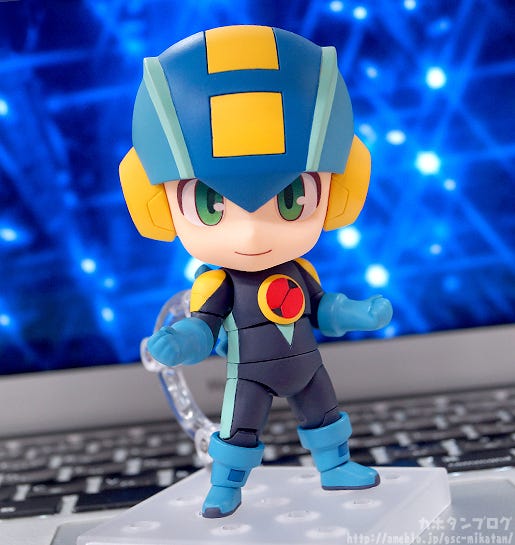 I am terrible at getting up in the morning. If I had a NetNavi I think I’d get him to wake me up on time every morning! On that note, today I’m going to be taking a look at… He comes with both a standard smiling expression as well as a combat expression with his a mask covering his mouth. Weapons include his standard Mega Buster as well as sword and bomb parts to recreate various action poses to suit all sorts of situations! Recreate your favorite battle scenes from the game!

Celebrating the 15th anniversary of the ‘Mega Man Battle Network’ series!! Lan Hikari’s NetNavi MegaMan.EXE is joining the Nendoroid series! Even the details on his back such as his little backpack and the spiky collar area have all been faithfully converted into Nendoroid size!★ ▲ Not to mention the lovely round shape of his head!

In addition, this Nendoroid is an addition to the ‘Edition’ series of fully articulated Nendoroids, meaning he features joints in his elbows, knees, shoulders and ankles allowing for all sorts of poses! You can pose him confidently running forward with his chest out along with many other heroic action poses! (∩・∀・)∩

He also of course comes with alternate parts for his Mega Buster! ♪ ▲The Mega Buster can be attached to either arm!

Plus to better pose him in combat mode… He comes with a combat expression with his mask up!

In addition, he also comes with Mega Buster shooting effect parts as well as an icon plate to display above his head to really bring out the feeling of the game’s battle scenes in Nendoroid size!! But that’s still not all! He also comes with more accessories! ★ Select the parts you like best and enjoy various different battle scenes!

As a quick side note, take a look at the details of the sculpting and paintwork underneath his feet!! ▲ The size balance between the little feet and hands is so cute!

As all of his joints are articulated you can also kind of place him in a sitting pose with some help from the Nendoroid stand! ε=(｡・д・｡) Enjoy both MegaMan.EXE’s gentle expression as well as the more combat-orientated side of his character all with this single Nendoroids! Be sure to add the reliable NetNavi to your collection!!

He’ll be up for preorder tomorrow! ★

In addition, preorders from the GOODSMILE ONLINE SHOP will also include a Battlefield Nendoroid Base (Red) to even further bring out the atmosphere of the battle system in Nendoroid size!! ★