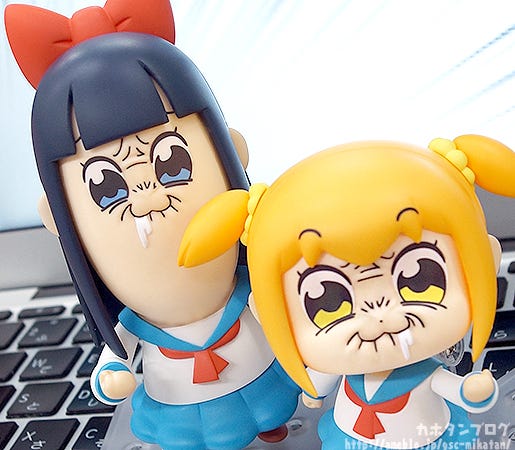 …is the headline that the head planner chose for these Nendoroids!

Nendoroids of the two main characters from the manga series that has become an online hit, ‘POP TEAM EPIC’! Popuko and Pipimi!! Don’t they look perfect in Nendoroid size?! It’s like they just jumped right out from the manga!! They also comes with a nice selection of face plates and optional accessories allowing for all sorts of fun!!

Even the bizarrely realistic middle finger pose is included! ▲ Even the lines between the different joints are included on the sculpt!

I was amazed at the reaction from everyone when I announced these two on Twitter the other day! ♡

Let’s take a closer look at them! ♪ From the popular 4-panel manga ‘POP TEAM EPIC’ comes a Nendoroid of Popuko! She comes with three face plates including a somewhat annoying standard expression, a flipped out expression and a sour expression.

She comes with a variety of interchangeable parts to recreate popular scenes from the manga, as well as speech bubble plates to pose her saying some of her most popular lines. She also comes with a certain building that gets destroyed as well as her cellphone. Be sure to display her with Nendoroid Pipimi and recreate the epic ‘POP TEAM EPIC’ in your Nendoroid collection!

Speech bubbles of popular lines from the manga are included to fully recreate the original!

You can also pose her calling the police in a rather unconcerned way!☆ ▲ She also comes with a little smartphone!♪ Flapping arm parts moving so fast that they leave an afterimage!!

Plus along with the ‘adorable’ standard expression above, she also comes with… A sour expression that shows off such intricate wrinkles all over her face, as well as… A completed flipped out face plate! ♥

The building part being smashed up is also included! Same of you may even know which building this is!! She also comes with effect parts to recreate the vigorous punching scene as she smashes the building!!

Orders from the GOODSMILE ONLINE SHOP will include three additional speech bubbles based on lines from the manga! ★ From the popular 4-panel manga ‘POP TEAM EPIC’ comes a Nendoroid of Pipimi! She comes with two face plates including a somewhat annoying standard expression as well as a sour expression.

She comes with a variety of interchangeable arm and leg parts to recreate popular scenes from the manga, as well as speech bubble plates to pose her saying some of her most popular lines. Be sure to display her with Nendoroid Popuko and recreate the epic ‘POP TEAM EPIC’ in your Nendoroid collection!

Pipimi’s rather uniquely shaped head has been faithfully preserved!

This does however mean that her expressions are not compatible at all with other Nendoroids! She also comes with a quick moving pointing finger as one her alternate hand parts! ♪ ▲ Works perfectly with the ‘YOU DID IT!’ speech bubble!

The hands are each intricately sculpted! ▲ The hands are just sticking out from a clear plate with lines!

Pipimi also of course comes with this expression… A sour expression that gives the utmost attention to the face sculpt! Here you can see she is tightly clenching her fist to combat the sourness!! It makes me want to display a lemon beside her!!

Be sure to pose her in all sorts of different situations!♪

Orders from the GOODSMILE ONLINE SHOP will include three additional speech bubbles based on lines from the manga! ★ Add some of the most unique Nendoroids ever to your collection! They will be up for preorder from tomorrow!

In addition, preorders that include both Popuko and Pipimi from any of our partner shops or the GOODSMILE ONLINE SHOP will also comes with this spiked bat as an additional bonus! ♥ An extra part for even more fun poses! * The bonus will be sent at the time your product is ready to ship.
* Only orders including both the above products during the campaign period above will be applicable.
* Please confirm the bonus is included with the store you choose to purchase from.

Be sure to consider the various bonuses when ordering! These products will also be on display at the POP TEAM EPIC POP UP SHOP at Shinjuku Marui Annex 7F this weekend on the 10th December 2017! If you’re in the area feel free to stop by and take a look! (｡･ω･)ﾉﾞ