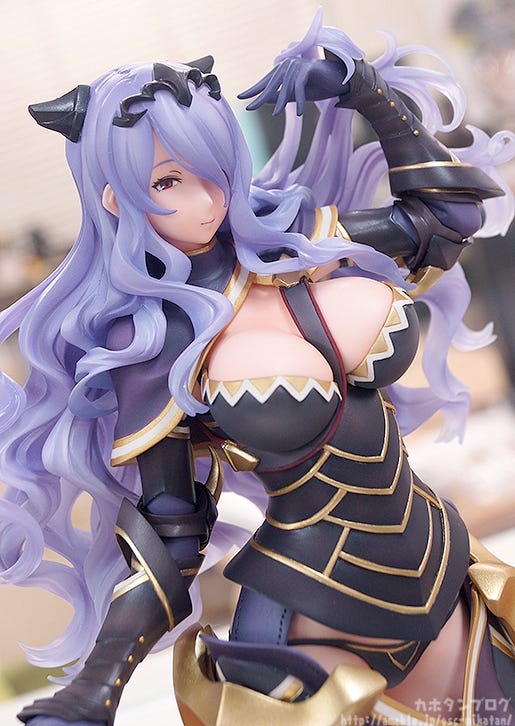 Today I’m going to be taking a look at a figure that is already up for preorder! A figure project co-developed by the developer of the Fire Emblem series, ‘INTELLIGENT SYSTEMS’ and monolith! From the popular game ‘Fire Emblem Fates’ comes a 1/7th scale figure of the beautiful princess of the Kingdom of Nohr, Camilla! The figure is sculpted by the highly acclaimed figure artisan Hiro and manufactured by Good Smile Company.

The figure captures Camilla’s persona with a noble, elegant appearance that still shows off her sexy side, with her hair making use of translucent parts to preserve its unique appearance. The ‘Silver Axe’ she has by her side has been based directly on the original designs from the game, and she comes complete with a special base made in the image of a marble pillar that brings out her beauty together with the atmosphere of the series.

The figure has been closely supervised by the game’s development team from the initial planning stages to the final paintwork to make it the ultimate official figure of Camilla! Be sure to add her to your collection and enjoy Camilla’s amazing design right by your side!

“Oh alright… Your big sis will stay by your side.”

From Fire Emblem Fates comes a scale figure of the princess of the Kingdom of Nohr, Camilla! Her stunning body has been captured so nicely in figure form for fans to enjoy! While the figure is a simple standing pose, the wavy yet silky hair style and cloth that flutters around the front and back of her body all come together to create a figure filled with life, even if it may be standing perfectly still.

Even though she is wearing a rather bold outfit that shows off her impressive bosom, there is something about the figure that doesn’t make you focus too much on the sexy aspect but instead captures the proud, dignified side of her character! Everything from the top to the bottom is so beautiful!!

Her regal style has been captured so nicely on the figure! (´□｀。)

As I’m sure you’ve all noticed… Camilla’s beautiful hair is translucent toward the ends!

The wavy appearance is so very intricate, and together with the way the light reflects through the translucent parts creates such a beautiful effect!

The hair also has very impressive volume, but the gentle translucent gradient creates a lighter, silkier appearance for the hair! ★ Each and every one of her stands of hair is so well sculpted!! Also note how you can some sections of her hair through the upper layer of other strands giving the figure depth even when seen from the back! The little peek of bare skin in between the hair toward the bottom is also a nice little treat! ε- (´ー`*)

The sculptor for this figure is none other than Hiro!

You might recognise the name from some of his other works, such as Musashi: Heavy Armament Ver.! ▲ Musashi also had such a nice balance of sexy and strength!

Let’s take a look down at her feet now… Even the base has a lovely premium appearance to it! A pedestal with paintwork made to look like marble! ヽ(●´Д｀●)ﾉ

You can also see the detail put into her axe from this photo! The smallest little details have all been captured!

Camilla’s armor has a sharp and cold texture, the cloth wisping around her has a soft feeling and her skin looks so soft and warm… The sculpting is of course a part of this, but the paintwork and differentiation from glossy and matte paints also brings out these different textures so effectively!

Also note the stitching along the material at her hips! ▲ Capturing both the sexy and strong of Camilla!

Her one eye is covered up by her hair, which causes the expression to have quite a different impression depending on the angle you look from! ε=(｡・д・｡) ▲ From this lower angle, she has a dignified, rather serious look on her face!

▼But from a higher angle she seems to have a gentle sisterly smile filled with love for her Avatar! ♡

▲ Even her eye look more gentle from this angle somehow!

Be sure to experiment and find the angle that you think suits her best! ♪ ▲Be sure to try all sorts of different angles!

Be sure to add the captivating princess and reliable sister to your collection!