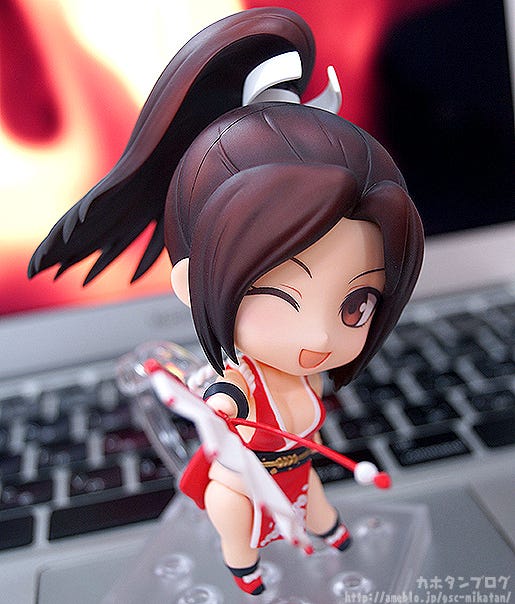 From the popular game ‘THE KING OF FIGHTERS XIV’ comes a Nendoroid of the heir to the Shiranui-ryuu ninjutsu style of fighting – Mai Shiranui! She comes with three different face plates including her a standard smiling expression, a combat expression holding a folding fan in her mouth as well as a winking expression that matches her signature line from the game!

Mai can be posed using a variety of her moves from the game and she also comes with special parts to recreate both the ‘Kachousen’ and ‘Ryuuenbu’ moves. Enjoy her impressive special moves in Nendoroid size!

From the popular fighting game series loved for years around the world – THE KING OF FIGHTERS (KOF) comes an adorable Nendoroid of Mai Shiranui, the heir to the Shiranui-ryuu ninjutsu style of fighting!

Her bold outfit that shows off plenty of skin has captured the attention of fans and opponents throughout the life of the game and now it has been transformed into cute Nendoroid size! ♡ Even as a 10cm Nendoroid figure the impressive size of her bouncy bust has been sculpted just as noticeable as ever!

All the details on the back of the outfit have also been faithfully included on the design! The large bow tied on her back and the intricate detail of the red ball accessory at her hips all look fantastic! (・∀・) Not to mention the little peek you can see of her bottom! That’s what you get for wearing this kind of outfit to a battle!

Her pony-tail is tied up at a rather high point which is connected by a Nendoroid joint which allows you to easily match the movement of her hair with various different poses! For example, you can pose her jumping through the air with her hair flowing beautifully behind her like so! ▲ I love these joined hands! ♪

Just like the previously announced Nendoroid Kyo Kusanagi: CLASSIC Ver. she also comes with various parts to recreate the action scenes from the game! She can even be posed making use of her mid-range attack! You wouldn’t think a throwing fan would be a very powerful weapon, but when it is in the hands of a Shiranui-ryuu ninja you had best be wary!! It’s quite a powerful attack!! But it’s certainly not her only strength, she can also be posed performing this classic move! A special version of the red ball accessory is included with semi-transparent flame effect parts attached to recreate her fiery move! (｡･ω･)ﾉﾞ ▲ The flaming red effect parts show the power of the Shiranui-style!

The Nendoroid also comes with three different face plates to choose from, allowing for all sorts of different scenes from the game! ☆

Together with the standard expression above as well as the winking expression that we saw at the start of the blog, she also comes with this rather unique expression… A combat expression with a folding fan held in her mouth!

Plus you can pose her together with Nendoroid Kyo Kusanagi: CLASSIC Ver. to bring out the KING OF FIGHTERS universe even more! ♪ ▲ You can even create some original scenes with the characters!

Be sure to add the bold female ninja to your collection!

Nendoroid Kyo Kusanagi: CLASSIC Ver. is also still up for preorder so you can even order the two of them together! Also be sure to take a closer look at him with this video!!

Plus we also have another special figure up for preorder tomorrow…

Belldandy: Me, My Girlfriend and Our Ride Ver. From ‘Oh My Goddess!’ comes a 1/8th scale of the main heroine, Belldandy! The figure is based on the original illustration used on the cover of the ‘Kosuke Fujishima Debut 30th Anniversary Art Book: Me, My Girlfriend and Our Ride’.

The pose features Belldandy sitting on her originally designed motorbike wearing a racing jacket. Belldandy herself is of course beautifully detailed, and careful attention has been given to the motorbike, goggles and other elements of the figure as well – creating a high quality work of art that fans will be proud to add to their collection!

For more information be sure to check the Good Smile Company Official Site tomorrow!!

I’ll be taking a closer look at her on the blog at a later date as well! (∩・∀・)∩