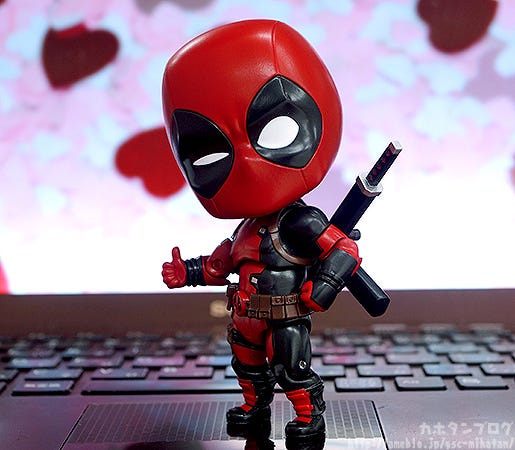 The hot Summer days are set to continue so I’ve started listening to Christmas songs to cool down my mind at the very least. Winter songs always sound great to me… perhaps even more so in Summer! From the movie ‘Deadpool’ comes a Nendoroid of Deadpool himself! His outfit has been shrunk down into a cute Nendoroid figure which comes with a variety of different expression patterns which can changed by swapping out the left and right eyes separately! He even comes with parts to display him with hearts popping out of his eyes!

A selection of comic speech-bubbles which allow you to pose him saying some of his classic lines and interchangeable parts which allow you to display him showing off his sexy heart-shaped underwear are included. The Nendoroid is also able to stand without the need of a Nendoroid stand – as long as you balance him carefully! Plus, as a part of the fully articulated ‘Edition’ series of Nendoroids you can enjoy all sorts of fun Deadpool-style action scenes when posing! Be sure to add him to your collection!

Deadpool is joining the Nendoroids!

The irresponsible hero that would rather fight for himself than peace or mankind – Deadpool is joining the Nendoroids! All of the little details of his outfit have been carefully shrunk down to Nendoroid size recreating the character that nobody could really hate in adorable chibi size! ♪ Even the slack part at the top of his head has been faithfully sculpted!

As you might be able to tell from the photos his elbows and knees are fully articulated allowing for many more poses and the ability to recreate even more of your favorite scenes from the comics or movie! (・ω・)/

His katana can also be removed from the scabbards and held in both hands! He also comes with various hand parts including thumbs-up parts, clenched fists and even this hand with his index finger pointed out! ▲ This hand can be used for all sorts of different poses!

Plus he comes with a selection of interchangeable eye parts to create various different facial expressions!ヽ(*・ω・)人(・ω・*)ノ

In addition, he also comes with parts to display him with hearts popping out his eyes for a more comical scene! ♡ ▲ This could also be used for so many different scenes!
What do you think he’s looking at?

Plus as it says in the product description, the figure can stand all on his own if you balance him carefully! Great to take out with you and take photos! ▲ The way he has his finger to his lip gives him a rather covetous appearance!

As the eye parts are separate on the left and right you can also switch out just one side for even more possibilities! (●´ω｀●) ▲Here we have a cute winking Deadpool!

Last but not least we have rather special parts… You can even enjoy Deadpool showing off his sexy heart underwear! ♡

The detail on both the pattern and flow of the fabric of his underwear as well as the appearance of his legs have all been very intricately sculpted! Combined with a serious expression it makes for a very baffling pose… that suits Deadpool rather well! (/ω＼)

Plus he also comes with a couple of comic speech bubbles to pose around him to bring out the comic atmosphere even more! ☆

▲ A special base to hold the speech bubbles is also included!

Add a rather adorable Deadpool to your collection!
Nendoroid Deadpool: Orechan Edition This product will also be “Made in Japan” at Good Smile Company’s Lucky Factory in Tottori, Japan!