For awhile I’ve always believed that hoods have the amazing ability to increase the moe level of any character, and hopefully today’s blog will help prove that to everyone!! Here’s s simple character with a hood plus extra long ‘moe’ sleeves… don’t you look at this and feel like you want to protect the cuteness?

Today I’ll be taking a look at this lovely hooded Nendoroid!!

Giant mechanical arms and a black hood?
I can only think of one character that has those, which is of course… 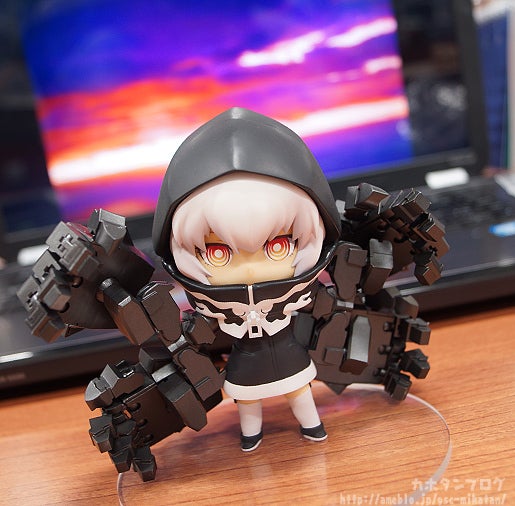 She’s the 5th Nendoroid from the Black Rock Shooter TV anime, and just like all the previous Nendoroids from the series she is packed with optional parts and extras – she comes with four Ogre Arms giving her an incredible amount of volume! (ﾟ∀ﾟ）

Here is a comparison of the original Nendoroid Strength’s Ogre Arm with the TV ANIMATION ver.’s Ogre Arm! (The lower one is the newer TV ANIMATION Ver.!)

You can even switch out the fingers with gun barrels! ヽ(ﾟ◇ﾟ )ﾉ The gun barrel parts insert into place securely and easily which is wonderful for clumsy people like myself! The pattern on her outfit has also become a lot more detailed and complex when compared to the previous Strength, but these are not the only part of her that has been upgraded… Just like her Ogre arms, her tail has also been made bigger and cooler looking! ♥

Let’s get the head planner for this figure and see what he has to say about it!

(・∀・) “The main thing I want everyone to pay attention to is definitely the four Ogre Arms! We really aimed to make them just like the arms from the series!” (・∀・) “The insane expression that was also seen as a part on the recently announced figma is also included with the Nendoroid! It’s definitely one expression that just had to be included in order to recreate the TV anime version of Strength!” Being able to pose Strength in her mad pose really is a lovely option!

I couldn’t resist the urge to put the expression on someone else, so I had Nendoroid Sayaka Miki try it on!(ΦωΦ)ﾌﾌﾌ (・∀・) “Next in the works is Black Gold Saw, and we’re making sure that she’ll meet everyone’s expectations! If you’re a fan of the series you definitely have something to look forward to!” I get the feeling Black Gold Saw will come out looking gorgeous!! She is such a lovely combination of cute and epic!

She’s up for preorder as of today!!

Today from 19:30 at Shinjuku Loft Plus is…
The figma 5th Anniversary Night! ♪

You can find more details here! ☆

Unfortunately the tickets are already completely sold out, but…
There will also be a live broadcast of the event!!!

The hosts of the figma Anniversary Night will be Max Factory’s Kaneko Nitohei and our very own Mikatan! I kind of want to go myself too…

I’m also told that today’s blog update on the Good Smile Lab blog features an interview with Kaneko about what will be going on at the event, so be sure to take a look if you’re interested! ☆

Anyway, I hope everyone has a great weekend!!
Planning Team / Kahotan (Blog Update #3!)