I’m sure all my female readers feel the same way!!

They are now up for preorder from animate!!

From the popular anime series, “Uta no Prince-sama – Maji Love 1000%’ comes a set of the princes to join the adorable Nendoroid Petite series of figures! There are seven to collect including one secret character!

Each of the characters is posed in a way that really brings out their personality so you can keep the princes by your side whenever you like! ♪

We had a quick look at them yesterday, let’s take a closer look now!

Even from the back you can see all the unique characteristics of each of the princes! Just look at Tokiya’s pointy hair from the back! A lot of them even have a gradient applied to their hair!

The three from A-Class!

One of the best things about the Nendoroid Petite series is that it is quick and cheap to get hold of a whole collection of characters! They’re just ¥500 for one, so you can grab each for just one coin!

The three from S-Class!

They’re all wearing the same Academy’s uniform, but each of them wears it in a different way – the sculptor must have had to sculpt all the bodies up from scratch! That did give us figures that each have their own special something though!

I can hear everyone shouting that on the other side of the monitor…. ^^;
I’ll be taking pictures of each prince displayed with another prince so you can get a better look at each of them!

When you display two of them together like this it really makes it seem more like the characters are actually there! The best thing about figures is that you can actually touch them and place them wherever you like – they’re really there!!

Tokiya glaring at his rival…!

The actual stands on the product version will be much smaller, so you’ll be able to pose them even closer than this. You could display them in a display case, or just keep them by your side and change their positions each and every day! 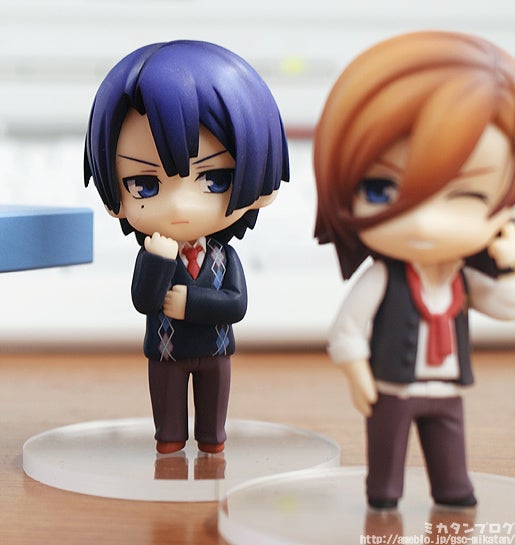 The two sons of big families! Seeing the two of them together makes me want to get hold of a small melon bread extra to recreate the purchasing scene…

The necks, arms and shoulders are posable!

That means the face can be moved around left and right and the arms can be moved up and down to create a slightly different feeling for different scenes! Even though they’re so small there are so many options to play with! (`･ω･´)

As I mentioned yesterday, Syo-chan’s hat can be removed and attached whenever you like! Natsuki, Otoya and Tokiya all have a very thin gold lining on their jackets which looks spectacular – seeing such amazing detail on such small figures always impresses me!!

Their expressions are also very detailed!

Finally an entire set of Nendoroid Petites that are all male! I think that UtaPuri fans will be very satisfied with the amount of detail that went into them – I know the expressions went through a ton of adjustments over and over again to get them looking perfect – they each really grasp the character’s personality!

There are a total of 7 to collect including one secret character! (ﾟ∀ﾟ)ﾉ

They cost ¥500 each and come in a sealed box so you don’t know who you’ll get until you’ve opened it! You can also buy a box with eight figures inside.

They are up for preorder from animate now!

If you have any preorder or sales queries please contact animate!